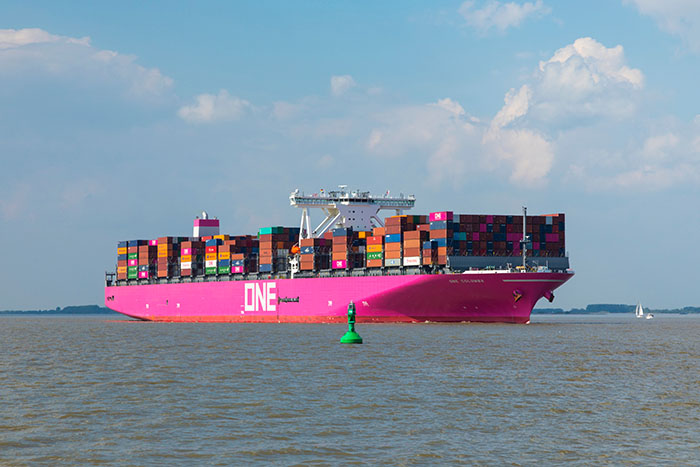 Ocean Network Express (ONE) is projecting a net profit of $60 million for its fiscal 2019 year, a considerable improvement from the $586 million net loss it reported in FY 2018. Photo credit: Oliver Hoffmann/Shutterstock.com.

Ocean Network Express (ONE) has lowered its full-year profit forecast by 33 percent on concerns of a further slowdown in the global economy and rising fuel costs, despite reporting a strong improvement in profitability during its second fiscal quarter ending Sept. 30.

The Singapore-based carrier, a merger of the container shipping divisions of Japanese companies “K” Line, NYK Line, and MOL, recorded a $121 million profit in the second quarter compared with a $192 million loss during the same quarter last year. In the first quarter of 2019, ONE reported $5 million profit.

Bunker fuel prices declined by $40 per ton from July through September. But the carrier noted in its earnings announcement today that bunker prices were expected to rise in the next six months due to the implementation of IMO 2020, and economic concerns were behind a downward revision in its spot rate forecast.

“Although freight rates in the North America trade were unchanged compared to the previous fiscal year, in the Europe trade, due to a deterioration in the supply and demand balance, freight rates did not rise during the summer peak season and were sluggish during the quarter,” ONE member NYK said in its earnings statement.

ONE expects rates to deteriorate on Asia-Europe, and demand to fall on the major east-west trades. As a result, the carrier has lowered its full-year expectation for fiscal 2019 to a net profit of $60 million, a decrease of 33.2 percent over previous guidance. Even so, that would be a considerable improvement on the $586 million net loss the carrier suffered in its 2018 financial year, its first year of operation.

ONE’s container volume in the trans-Pacific trade during the second quarter grew a marginal 1.5 percent to 773,000 TEU, and Asia-Europe volume was up only 2 percent year over year to 488,000 TEU. But when the first quarter is added, the volumes are up sharply compared with the first half of FY 2018. Transport volume in the trans-Pacific was up 11.6 percent, and Asia-Europe volume grew by 20 percent in the April through September period. Revenue in the first half increased by 5 percent to $5.98 billion.

ONE has managed to steadily improve its performance since earnings were hurt by setup costs in early 2018 during the merger of the three Japanese carriers and launch problems with the new ONE line.

ONE’s gloomy outlook for its financial year — which ends on April 30, 2020 — is in stark contrast with Maersk Line’s recent earnings upgrade. Citing a reduction in fuel prices that have declined since April, the Copenhagen-based carrier upgraded its full-year earnings (EBITDA) guidance from $5 billion to between $5.4 billion and $5.8 billion. Maersk attributed the increase in expected earnings to improved reliability and capacity management, in addition to continued margin improvements.

Also seemingly defying the global economic slowdown was Cosco Shipping Lines, the world's third-largest container carrier by capacity, which posted a market-beating increase in revenue per TEU in the third quarter to boost profitability.

The group, which comprises both Cosco Shipping and Hong Kong-headquartered subsidiary OOCL, generated overall revenue of $5.09 billion in the third quarter on liftings of 6.64 million TEU, an increase of 6.6 percent year over year. OOCL revenue per TEU in the July through September period climbed to $924, up by 1.5 percent compared with the same period last year.