ONE Apus redirects to Japan after losing containers in storm

ONE Apus redirects to Japan after losing containers in storm 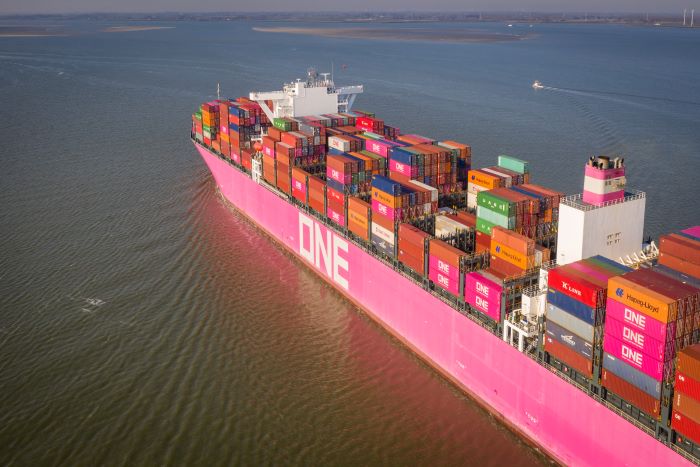 The loss of containers at sea underscores how weather is one of the many challenges faced by carriers as service reliability continues to deteriorate. Photo credit: Shutterstock.com.

Violent weather caused more than 1,900 containers to be lost or damaged while an Ocean Network Express ship was en route to Long Beach, California, this week, the largest loss containers at sea in more than seven years and a fresh reminder of how more severe storms are hurting ocean reliability.

The ONE Apus has been redirected instead to Kobe, Japan, where it is due to arrive Dec. 8, at which time a full damage assessment and investigation will take place, according to a joint statement from shipowner Chidori Ship Holding and manager NYK Shipmanagement.

“The priority remains on getting the vessel and crew safely to port,” the statement said. “Once berthed, it’s expected to take some time to offload the dislodge containers that remain on board. Then a thorough assessment will be made on the exact number and type of containers that have been lost or damaged.”

Chidori and NYK said that number “could exceed” 1,900, including 40 containers categorized as “dangerous goods.”

The 14,000 TEU Apus was en route from Yantian, China, to Long Beach when it encountered a “violent storm cell” Monday night about 1,600 nautical miles northwest of Hawaii, according to the statement. The storm produced “gale force winds and large swells which caused the ONE Apus to roll heavily, resulting in the dislodging of the containers,” it said.

The incident would mark the largest loss of containers since the June 2013 sinking of the MOL Comfort off Yemen, when 4,293 boxes were lost, according to the World Shipping Council (WSC). WSC, in a July update of its “Containers Lost At Sea” report, said an average of 779 containers were lost annually in the three-year period from 2017 through 2019.

Weather one of many service challenges

The Apus’ loss of containers also underscores how weather is one of the many challenges faced by carriers as service reliability continues to deteriorate.

Eastbound trans-Pacific ocean reliability plummeted in October to its lowest since data collection began in 2011 as carriers rapidly expanded their capacity to meet growing cargo demand, contributing to mounting congestion at the ports of Los Angeles and Long Beach.

Vessel on-time performance in the Asia–North American trade plunged more than 14 percentage points from September to 32.1 percent to the West Coast and 34.5 percent to the East Coast, according to the Global Liner Performance report from Sea-Intelligence Maritime Analysis.

Carriers and forwarders told JOC.com in September that typhoons and associated bad weather in east Asia were wreaking havoc on sailing schedules and port calls, with shippers facing cargo delays even as far away as Vietnam.

Jeremy Nixon, the CEO of ONE, has repeatedly warned that stronger and more frequent severe storms are challenging schedule reliability. “Global warming is happening,” Nixon said in his 2018 keynote address at the TOC Asia Exhibition.

ONE orders 10 mega-ships designed to run on methanol, ammonia

How to Improve OTIF: 15 Tips for On Time and In Full Delivery
END_OF_DOCUMENT_TOKEN_TO_BE_REPLACED