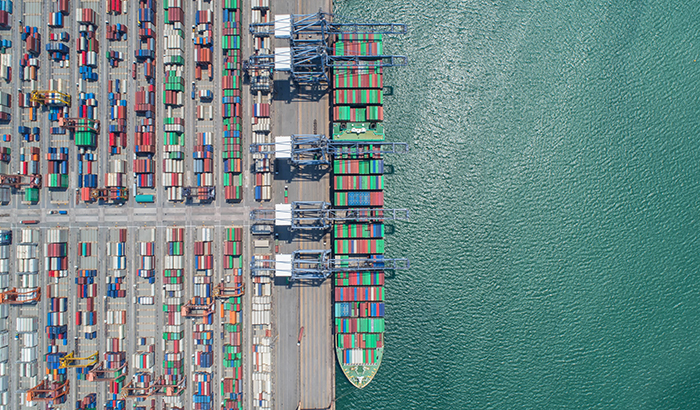 Members of the Ocean Alliance have increased their share of Asia imports the most out of the three major vessel-sharing agreements, while the niche carriers still managed to grow their share as well, thanks to new entrant SM Lines scooping up much of Hanjin Shipping’s business.

The dominant presence of the Ocean Alliance in the eastbound Pacific does not surprise David Bennett, president Americas at Globe Express Services. “Look at their sailing schedules from China, their overall capacity, their service integrity their transit times,” he said. On the other hand, Bennett said the niche carriers contribute to a balanced environment in the Pacific by tailoring their services to their customer base, maintaining good service levels, and pricing competitively. “There’s always a place for niche carriers that have quality service,” he said.

Two significant mergers now under way — consolidation of the three Japanese lines into one and the Cosco Shipping Holdings’ acquisition of OOCL — will likely have a positive impact on their respective alliances when the mergers take full effect next year, said Lars Jensen, CEO and partner in SeaIntel. The consolidation of the Japanese lines means it will require only three lines to agree upon network modifications within THE Alliance, rather than five at present, and three carriers in the Ocean Alliance rather than four today, he said.

“This increases the agility in decision-making, not that it will become smooth sailing as the carriers will clearly have different opinions, but the fewer the parties who need to agree and compromise, the faster it goes and the fewer individual ‘quirks’ will be there to reduce the overall efficiency of the networks,” Jensen said.

The Korean carriers could be a wildcard in the Pacific in the coming year. HMM attempted to become a full member of the 2M Alliance with Maersk Line and Mediterranean Shipping Co., but the two large European carriers would agree only to a slot-sharing arrangement. SM Lines did not respond to questions, although the Korean carrier that emerged after the bankruptcy of Hanjin Shipping has not publicly expressed interest in joining an alliance. Jensen noted that compared with the large alliance lines, the Korean carriers “are both small indeed,” and as such their potential contribution to an alliance is likewise small. “They would therefore not have much negotiating leverage in any talks relating to adoption into an alliance as things stand now,” he said.

Although the niche carriers did not grow as quickly in the second quarter as the alliance carriers, some of the independent lines do have plans to increase the size of their vessels in the coming year. The niche carriers say they plan to grow by offering specialized services within their niches, rather than by competing head-on with the alliance carriers on vessel size or number of services. The niche carriers will build upon what they do best, which is to better utilize their equipment, achieve higher slot utilization, and seek out healthy export rates with a focus on profitability.

By definition, niche carriers are unique, even compared to each other, because each line develops a business plan built around its asset base, the trade lanes in which it operates, and most importantly, the value it provides to its customers in particular niches. Presumably, the value proposition is such that each line’s customers are willing to pay a premium rate for a service that fits its needs better than what the larger carriers offer. However, when competing head-on with the large alliance members, the niche carriers sometimes have to price below the market rates in order to secure business.

Jensen said it is all about the service that is provided to beneficial cargo owners (BCOs), but that raises the question of what “service” means to individual customers. Larsen said service to some BCOs means faster transit time and greater reliability in a particular lane. Some BCOs seek faster delivery of containers once the vessel arrives in port. Others look for a seamless handoff of the container to inland carriers. Other BCOs want personalized service from their carrier representatives, and the ability to pick up the phone and call the representative when something goes wrong, he said.

When it comes to service levels, Matson bills itself as a leader at sea and on land. Matson, which is primarily a carrier in the US domestic (Jones Act) trades, has one service each week from China to its dedicated terminal Long Beach that it operates with SSA Marine. This arrangement enables Matson to address several of the service attributes that Jensen mentioned. Matson spokesperson Keoni Wagner said the China service provides an industry-best 10-day ocean transit from Shanghai to Long Beach (compared with 12 or 13 days for most carriers), a high reliability of next-day availability of all containers on chassis at a near-dock yard, and a seamless handoff to inland transportation providers managed by Matson Logistics.

Those services come at a cost to Matson. It contracts with Shippers Transport Express to truck most inbound containers immediately upon discharge to the near-dock yard. The yard is open from 6:30 a.m. to 2 a.m. local time the following morning. That enables BCOs to take delivery of their containers, on wheels, without having to wait in line at the marine terminal.

Yet Matson also profits from this arrangement. The trans-Pacific is notorious for being a headhaul trade with weak backhaul rates. Carriers charge $1,500 to $2,000 per 40-foot container on the eastbound leg from Asia, only to give any profits away on the commodity-driven westbound leg, with rates below $500 for many commodities and about $200 or less for the lowest-rated commodities.

Matson’s weekly China service has headhaul moves in both directions. Vessels steam westbound to Hawaii, a protected Jones Act trade, continue on to China and return with ships filled with imports from China. Given its rapid ocean transit and overnight delivery times in Long Beach, Matson markets its service as premium, and charges accordingly.

Singapore-based PIL also profits on its exports, but not to the major load centers in China and North Asia. Ernie Kuo, senior vice president of PIL USA Agency Services, noted that PIL, with its own vessels or through slot-sharing arrangements with other lines, offers service in 80 loops globally. Its network includes a number of destinations, such as in the South Pacific, Southeast Asia, and Africa that are not served directly by the mega-carriers. Some of the loops link nicely with its US ocean and intermodal offerings.

PIL builds off of the eight eastbound trans-Pacific services, as well as its intermodal inland connections, to offer opportunities for US shippers that export to locations throughout its network. These arrangements may produce only a half-dozen or so export shipments per BCO, but they build goodwill and business relationships with BCOs that grow with time. Also, since many of those trade lanes offer little if any direct carrier competition, they tend to be “higher-revenue destinations” for PIL, Kuo said.

Zim competes directly with alliance carriers in the major US trade lanes, but it picks its gateways strategically based on equipment repositioning opportunities, relationships with railroads, and opportunities for offering value-added services. For example, Zim does not take on the mega-carriers in Los Angeles-Long Beach, even though Southern California is “ground zero” on the West Coast, Goldman said. Rather, Zim calls in Vancouver where it has a working relationship with Canadian National Railway. Zim has always had a strong presence in the Canadian market, and CN’s intermodal service to Chicago, Memphis, and New Orleans give Zim deep penetration in the US interior, he said.

Zim does not have its own terminal in Los Angeles-Long Beach, which can be a disadvantage, Goldman said. Also, Zim right now does not see an opportunity to differentiate itself in a gateway served by the largest carriers with the biggest ships in the US trades.

Zim’s trans-Pacific services to the East Coast transit the Panama and Suez canals. Its Savannah calls not only serve the fastest-growing region of the United State, the Southeast, but the Suez routing also gives Zim opportunities to serve the mid-South via intermodal rail provided by CSX Transportation, Goldman said. Also, Zim’s North American services link up efficiently with export opportunities to other parts of the world where it is strong, such as the Mediterranean and Caribbean.

Similarly, as Zim looks for growth opportunities, the Gulf becomes a consideration, he said, because Zim is well established in the Caribbean. A Gulf service would mesh well with its existing Caribbean services, and would produce more turns for Zim’s containers.

“It’s all about profitability and sustainability,” Goldman said. The reality is that not every carrier can do or wants to do what Zim does. Zim strategically chooses routes that provide opportunities for higher-revenue cargo and value-added services based on profit rather than high volume for the sake of volume, he said.

Niche carriers say it is not impossible, but it is difficult, to achieve their goals through participation in an alliance. That reality has kept Wan Hai out of alliances so far. “We are currently not interested in joining an alliance as our current service structures allow us to focus on our current customers appropriately,” said Randy Chen, vice president.

For niche carriers, “nimble” and “flexible” are important advantages, and membership in an alliance can limit flexibility. At PIL, “the chain of command to the top is quick,” Kuo said. To an entrepreneurial carrier, that means being able to react promptly to even a small opportunity because small beginnings often lead to bigger dividends as the business relationship grows. Citing one example, if a BCO inquires about a booking that PIL cannot service, PIL will recommend another carrier that can offer the service the BCO is looking for. At a later date, the same BCO may return with business that fits into PIL’s service offerings, he said.

Being a niche carrier does not mean being a small line with small ships. PIL, for example, is a top-12 carrier in terms of global container volume, and it is involved in a new-build program that will deliver 12 ships with capacities of 11,800 TEU. The new vessels will be deployed on the high-volume trade lanes where PIL has slot-sharing arrangements with Cosco Shipping Holdings and Wan Hai. The key to making big ships profitable is to properly manage allocations, Kuo said.

Another reality about niche services is that they have a limited capacity for growth. Matson learned that lesson seven years ago when, pleased with the success of its weekly China service, it started a second one. That service operated from September 2010 to August 2011 before Matson discontinued it.