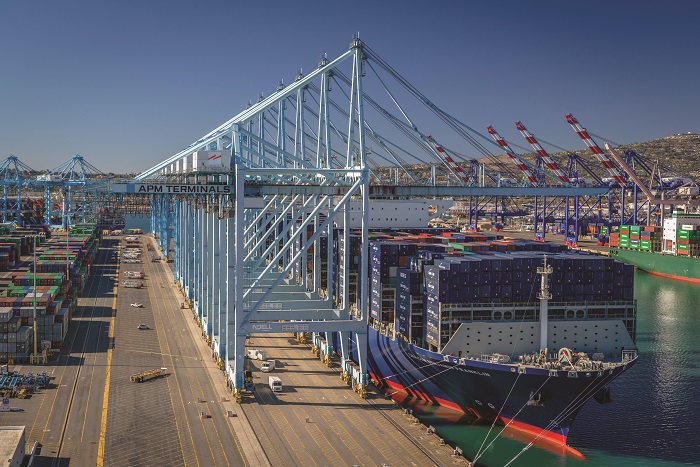 The “giants” have begun calls at ports in North America, escalating the need for infrastructure improvements. Photo credit: APM Terminals.

North American ports face the dual challenge of modernizing their terminals and connecting infrastructure to meet the immediate needs of beneficial cargo owners (BCOs), while engaging in long-term planning for even larger cargo volumes and bigger ships as the maritime industry consolidates.

BCOs are agnostic when it comes to terminal and vessel size, but they react quickly to port congestion, long truck lines, and equipment charges that are precipitated by port inefficiencies. Their instinct is to look quickly for alternative gateways for their shipments.

“We recognize that consolidation is the key driver of the market today along with larger ships,” Matt Plezia, director of master planning for the Port of Long Beach, told the PortCon conference on Nov. 28 in Long Beach. As ports develop their master plans with a timeline of 10 to 20 years, however, they must coordinate those plans with existing projects still under development.

This means ports are modifying facilities designed for vessels with a maximum capacity of 5,000 TEU to handle ships of more than twice that size to handle today’s cargo volumes. Ports also are planning for 22,000 TEU vessels that are on order for the Asia-Europe trade, but could someday call in North America. For Los Angeles-Long Beach, North America’s largest port complex, planners are preparing for a projected container volume of 40 million TEU in 2040.

Noel Hacegaba, managing director of commercial operations and chief commercial officer at the Port of Long Beach, told PortCon that more than half of the vessel orders at global shipyards are for ships with capacities of 18,000 TEU or greater. He said the average vessel size in Long Beach is 7,788 TEU and 7,474 TEU in neighboring Los Angeles. The average would be even higher if only those vessels in the trans-Pacific trade were considered.

Further, port planning is made even more complex by demands from federal and state regulators to incorporate into the design and operation of marine terminals large reductions in emissions from vessels, cargo-handling equipment, trucks, and trains. For Los Angeles-Long Beach, the leading laboratory for environmental initiatives, the future will include 100 percent capture of emissions from vessels at berth, slow-steaming within 40 miles of the coast, near-zero-emission trucks in the short term, and zero-emission trucks by 2040, Christopher Cannon, chief sustainability officer and director of environmental management at the Port of Los Angeles, told PortCon.

North America’s west coast ports from Prince Rupert, British Columbia, to Southern California were first out of the gate five years ago to begin modifying their facilities and cargo-handling processes to efficiently handle 10,000 TEU vessels and larger. US East and Gulf coast ports had this challenge thrust upon them in June 2016 when the expanded Panama Canal enabled vessels up to 14,000 TEU, almost three times the size of Panamax ships, to serve those ports on all-water services from Asia.

The Port of New York-New Jersey, which last summer opened mega-ship access to all of its container terminals when it completed a project to increase the elevation of the Bayonne Bridge, experienced a sudden burst of mega-ship calls. In the first eight months of 2017, the number of 8,000 to 10,000 TEU vessels calling the port increased 35 percent compared with the same period the previous year. Last autumn, the port welcomed the 14,000 TEU CMA CGM T. Roosevelt, the largest vessel ever to call at the East Coast’s largest port.

Because about 50 percent of the vessel is discharged and reloaded in New York-New Jersey, stakeholders immediately felt the impact of each vessel call in terms of longer vessel stays, container yard congestion, and longer truck turn times at the gates. To prepare for the larger vessels and increased container moves per vessel call, terminal operators invested $2 billion in capital projects, and the port and federal government kicked in another $4.7 billion.

Most North American container ports face similar capital investment requirements as they prepare their facilities and inland infrastructure for, at minimum, a doubling of cargo volumes in the next 20 years. Prince Rupert, for example, last summer added a second berth at its Fairview container terminal. Vancouver, 500 miles to the south, is expanding its Deltaport and Centerm terminals to add 1.2 million TEU of capacity in the short term, while planning for construction of Roberts Bank Terminal 2, which will add another 2.4 million TEU of capacity by the mid-2020s.

Even the most modern marine terminals and connecting infrastructure alone, however, will not be enough to handle the container exchanges that can exceed 20,000 TEU in a single vessel call, as the APM Terminals facility in Los Angeles experienced last autumn from a Maersk Line vessel, Hacegaba said. Ports also must modernize their cargo-handling processes and modify non-container facilities to improve cargo flow, such as by establishing near-dock sites for equipment storage. “That’s why we went into supply-chain optimization,” he said.

Processes that enhance cargo velocity include trucker appointment systems, formation of gray equipment pools that feature interoperable use of chassis, and free-flowing of cargo, also known as peel-off. Allied with cargo-handling processes is the repurposing of port properties to enhance overall efficiency. Moving chassis from marine terminals, for example, can free up 10 to 20 acres of space per terminal that can be better used for handling containers, according to Gene Seroka, executive director of the Port of Los Angeles.

Chassis removed from marine terminals, however, must be stored, maintained, and kept in roadworthy condition at near-dock sites that provide truckers with efficient access to the terminals. Long Beach and Los Angeles are seeking out unused parcels in the harbor area that can be repurposed as chassis stop-start locations.

After several years of hesitancy, ports on both coasts are moving decisively into mandatory appointments, which help terminals to manage truck flows and plan ahead for their labor and equipment needs. Although the drayage industry has mixed views about appointments, truckers will generally accept them, if they are consulted as the systems are put in place so they allow a degree of flexibility and are designed with trucker and terminal efficiency in mind.

Nine of the 12 container terminals in Los Angeles-Long Beach have appointment systems. Global Container Terminal in New York-New Jersey launched the port’s first program last year, confining it to two hours when the gates opened. Global has since expanded the window from 6 a.m. to 1 p.m. APM Terminals and Port Newark Container Terminal are expected to add appointments once their gate reconstruction projects are completed.

The port of Vancouver, British Columbia, in 2014 included mandatory trucker appointments in a 14-point program designed to improve truck flow in the harbor. The port authority added a second shift, five days each week, and made trucker appointments an integral part of the reimbursement process for terminal operators. A fee is charged for daytime appointments. This strategy also helps to spread traffic flow out over 16 hours by offering the less-desirable second-shift slots free of charge.

In addition to dealing with the challenges created by mega-ships operated by powerful carrier vessel-sharing alliances, ports face increasing pressures to mitigate the effect of harmful diesel emissions generated by vessels, harbor craft, cargo-handling equipment, trucks, and trains. Environmental regulations affect ports to different degrees based upon local environmental conditions, but all ports are expected to address health risks as well as greenhouse gas (GHG) emissions as their footprints expand.

As has been the case since the Southern California ports in the late 1990s began to require pollution reduction efforts by their users in order to secure approval for expansion projects, Los Angeles and Long Beach have led the environmental charge. Their joint Clean Air Action Plan (CAAP) in 2006 has reduced diesel particulates by 87 percent, nitrogen oxides by 56 percent, sulfur oxides by 99 percent, and GHGs by 18 percent, according to CAAP documents.

CAAP in November went through its third update, and the ports, which are agencies of their respective cities, plan to fulfill the directives of their mayors to move to zero emissions, and where that is not possible, near-zero emissions. The trigger dates, which at this stage of technological development are goals rather than hard deadlines, are to achieve zero-emission cargo-handling equipment by 2030 and zero-emission road trucks by 2035.

Naturally, the transportation and terminal-operating industries are concerned about the cost of compliance, which the CAAP estimates as $14 billion. The Pacific Merchant Shipping Association warned that such costs would be especially burdensome and would lead to cargo diversion. Mark Sisson, who leads the marine analysis group at port engineering and consulting firm AECOM, holds an opposing view.

Progress in developing battery and plug-in electrically powered cargo-handling equipment and trucks is well under way, and such units will be mass-produced at affordable prices well before the suggested deadlines are reached, he said. In fact, since battery- and electric-powered machines have lower operating costs and lower maintenance costs, terminal operators and drayage companies will opt for this technology as it becomes commercially available.

In the meantime, the ports, working with their private sector stakeholders and equipment providers, are piloting these units for harbor use. Los Angeles and Long Beach are planning for 70 zero-emission trucks to be in use by 2019.

While other ports are implementing green programs based on the ambient pollution conditions in their regions, most gateways are promoting clean-truck programs and efforts to electrify portions of marine terminals. Ship-to-shore cranes at most ports already are electrified, for example.

The planning is unfortunately

Permalink Submitted by ferrullig@minds... on Jan 1, 2018 11:21AM EST
The planning is unfortunately limited to a port and the city or state that owns it. There is no coordinated effort to solve and resolve national interests, no national direction or over site. Everyone is on their own to plan, organize, find funding and they are often at odds with each other making it more difficult. We need a "national interest" ports plan, not continued individual plans that make little or no sense for the country.

How to Improve OTIF: 15 Tips for On Time and In Full Delivery
Download
END_OF_DOCUMENT_TOKEN_TO_BE_REPLACED