The new oligopoly of container shipping

The new oligopoly of container shipping 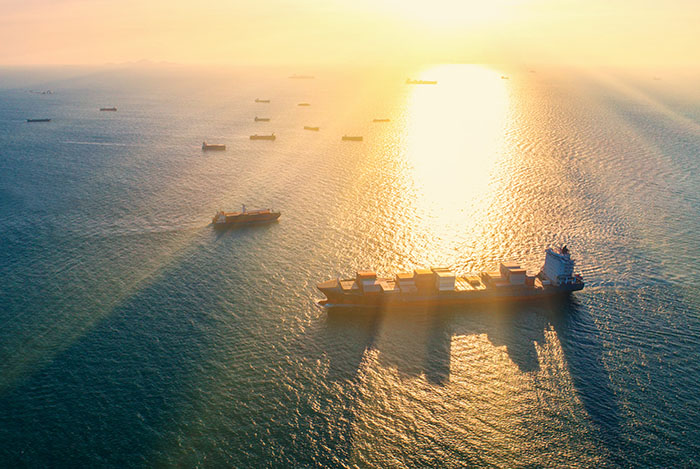 The combined market share of the 10 largest global container carriers has jumped from 51 percent in 2000 to 82 percent today. Photo credit: Shutterstock.com.

Since the 1970s, the container shipping industry has been used to a market environment with a large number of carriers to choose from. No single shipping line had the scale to truly “dictate” supply and demand, nor did any one line have sufficient market power to significantly sway other lines’ behavior — not even when exemptions from competition law allowed them to form cartels.

But just as the tide has a habit of sneaking up on you when you aren’t looking, the fundamental competitive dynamics of the market have irrevocably changed. On the major trades, the market structure is now one of an oligopoly, and this will also become the case in many regional trades in the coming years.

An oligopoly is an industry where the market is dominated by a small number of large sellers. What technically constitutes a “small number” is up for debate, but another aspect of such a market is that the number of sellers is low enough that each seller can develop strategies around the likely responses of the other players in the market to any action they themselves might perform.

But what does this mean for shippers? And for carriers?

From a global perspective, the 10 largest liner shipping companies had a market share of 51 percent as we entered the new millennium. Today, that share has increased to 82 percent. On the deepsea east-west trades, this is additionally concentrated into only three alliances that control the vast majority of capacity.

It is important to note that in the alliances, only capacity is coordinated, not commercial activities and pricing. However, this means that the design the core ocean products, as well as managing the supply side of the equation, is clearly controlled by just three groups. On the commercial side, this has been reduced to nine main players, of which two — HMM and Yang Ming — are substantially smaller than the top seven.

From a capacity perspective, the carriers certainly do resemble an oligopoly. And that we have arrived here is no surprise. Mergers and acquisitions have been a regular occurrence for the past 20 years, as carriers sought to reap cost benefits from greater scale to offset declining freight rates.

But what about pricing? Are the carriers leveraging the opportunities of an oligopoly in setting rates? Looking at the China Containerized Freight Index (CCFI) contract rate index from 1999 to 2017, the general trend has been an increase in price volatility, quite the opposite of what one might expect given the simultaneous consolidation among carriers.

However, it is important to keep in mind that for a large part of this period, the market was also plagued by varying degrees of overcapacity, a situation that became especially acute in the wake of the financial crisis. Overcapacity combined with the zero-sum nature of the demand side in the industry naturally spurred intense price wars as carriers looked to gobble up market share. Additionally, the final bout of consolidation only happened in 2017/2018.

Developments in 2018 and the first half of 2019 indicate that the carriers’ behavior is shifting towards strategies that can make use of the newly established oligopolistic structure. But carriers cannot control demand; unlike an airline, for example, they cannot create more demand by lowering the prices. Lowering the prices only serves to shift market share between carriers in the short-to-medium term.

On the other hand, carriers can control supply, especially now that nearly all capacity on the east-west trades is controlled by three alliances. Anticipating a weak trans-Pacific peak season last year, carriers preemptively withdrew capacity, clearly aiming at improving freight rates, rather than increasing market share. This, coupled with unprecedented peak season volume driven by frontloading of cargo due to the US-China tariff dispute, resulted in the strongest peak season rate environment in a decade. But the trigger point was a newfound capacity discipline among the carriers.

On the Asia-Europe trade, freight rates were extremely volatile from 2009 to 2016, sometimes swinging as much as $1,000 per TEU in either direction within just a couple months. At its worst, rates were declining $250 per TEU per week on average, interspersed by sharp general rate increases from carriers. From 2017 on, rate levels suddenly became much more stable, mainly fluctuating in a narrower band of between $700 and $900 per TEU.

Coming into peak season 2019, carriers have preemptively curtailed capacity growth using blank sailings in the trans-Pacific, clearly expecting a weak peak in the wake of the ongoing tariff dispute. Until recently, no such restraint was evident on the Asia-Europe trade, but as data began to point to weakness in this market as well, carriers were quick to cancel sailings.

Herein lies another sign that the carriers are beginning to learn to wield the tools at their disposal. Making large changes to networks is a difficult exercise for many reasons. However, blanking individual sailing to better match capacity to demand is much more straightforward. And in the new environment, where there are only three main players providing capacity, the market impact of such actions also becomes much more predictable.

Shippers must adapt to the new environment

To be clear, there is nothing illegal or inherently sinister in being an oligopoly. Being a part of an oligopoly does not mean that the carriers are colluding. It simply means that the complexities related to analyzing the impact one carrier’s actions have on the market have been reduced and, therefore, each line is better able to manage its operational and commercial resources.

Some might see this as a reason to ban the use of alliances, but in this scenario, shippers would be even worse off than they are today. The reality is that the carriers own a couple hundred ultra-large vessels, and the only way to operate them efficiently is through space sharing agreements. Disallowing alliances would inevitably result in less direct port-to-port coverage and more transshipment, which in turn would raise both costs and transit times for shippers. It could be argued that if the carriers had never built any vessels in excess of 10,000 to 12,000 TEU in the first place, alliances would not have been necessary. But again, the reality is that the ultra-large vessels do exist and that they have to be used in order for carriers to recoup their costs.

Shippers, therefore, should begin to examine their own freight procurement strategies. In many cases, these strategies have served them well for many years, but to the degree these strategies are contingent upon fierce competition between carriers on price and/or market share, they will have to be adjusted.

Carriers — not all, but most — will be increasingly inclined to say “no” to additional cargo, especially low-margin freight, and instead curtail capacity. This will result in upward rate pressure over time — not a sharp spike all of a sudden, but a long, slow increase like the tide coming in.

In the smaller regional trades, the market has yet to fully turn to oligopolies, but it is only a matter of time. The wave of consolidation among global carriers is also unfolding at the regional level. Since the turn of the millennium, as many as 60 of the 100 largest carriers at the time have disappeared through mergers, acquisitions, and bankruptcies. There are currently no signs that this trend is slowing either, which means that by 2038, only 16 of the top 100 carriers from year 2000 might still be in existence.

Correction: An earlier version of this story incorrectly stated the market share in the late 1990s of the top 10 carriers was 12 percent, when it was, in fact, 51 percent. JOC apologizes for the error.

Permalink Submitted by Heron.memallaj@... on Jul 5, 2019 9:50PM EDT
Overall good article but there will be others who will look at the opportunities such as newcomers in the industry to niche lanes as Yantian to Lax , direct sailings , smaller vessels can compete with the mega ships any day for cargo .Long term ,demand will shape strategies not supply.

What you suggest used to be

Permalink Submitted by ferrullig@minds... on Jul 14, 2019 11:06AM EDT
What you suggest used to be done quite commonly. Charter a few ships, lease some containers, hire agents and you are in business. Do you see that today? There is a reason, virtually none of them made money and went out of business. Supply/demand does impact price and profitability and the carriers control it, cargo interest don't. No better example that 2009-2010; losses of $21. Billion in 2009, anchoring over 600 vessels in 2010 leading to a profit of $8. Billion, a $29. Billion turn around. Who did that, cargo interests? We see in the last year, that the carriers managed capacity in the TP well for months and rates rose to near record levels, shippers did pay $2300. from Yantian to LA. It's the carriers that control the supply spigot, they can turn it off and on almost at will and flex the supply to demand. Cargo interests can't flex purchases to affect ocean supply or pricing, and ocean pricing doesn't influence the market demand. No one makes one more flat screen TV when TP rates are at $800. , or one less when the rates are at $1800. But carriers can skip sailings, even anchor ships, to control the supply to meet whatever the market is doing . That they don't do it on a regular basis globally is a question only those at the carriers headquarters in Europe and Asia can answer.

I am of the mind set that

Permalink Submitted by mpipia@guardian.com on Jul 8, 2019 7:50AM EDT
I am of the mind set that once you control capacity you control price, its only a matter of time. Carriers do not control supply side but by controlling the demand side they do control. If one of the three major alliances make a change its only weeks sometimes only days after the other two follow. Lets not forget Economic class 101, when you control one axis you force the other side to change in some way. Again not in the shipper favor. Yes and in most cases SERVICE suffers!

Many good points and of

Permalink Submitted by ferrullig@minds... on Jul 14, 2019 10:48AM EDT
Many good points and of course issues that many will question. One issue is that NOW carriers are starting to understand that controlling capacity is a key to profitability; how about between 2009 and 2010? Watching the global markets drop like a rock with concomitant drops in bottom line to the tune of losing $21. Billion in 2009, carriers anchored over 600 vessels - the ultimate capacity management tool. What happened? In 2010 they made $8. Billion, and $29. Billion turn around. And then? 6 straight years of losses, extended 8 out of 10 years with losses and a total exceeding $30. Billion. Why, when they saw the dramatic turnaround, didn't they repeat it? Didn't they understand the cause and effect? Are they slow learners? While they have lessened the volatility in the Asia/Europe market, with so few major player, why is there any volatility? Why do the same management teams that decide to control capacity in the TransPac and watch rates climb to near all time highs, not do the same in Asia/Europe? Let me suggest that the same decision making has been an industry standard for decades; during the 1970's, with Conferences and anti-trust immunity to fix prices, they managed to make little money and many carriers from that era went out of business. They had a license to print money, but decided that cash rebates, extended free time, free positioning of equipment, rating 40 ft containers as 20 foot and a whole slew of other similar decisions were made. Why? It's an obviously flawed business model aided by illogical business decisions. And it isn't new, just a new format.

US importer complains of container line collusion to FMC

Solving for Uncertainty: A Guide to Variable Transportation Budgets
END_OF_DOCUMENT_TOKEN_TO_BE_REPLACED