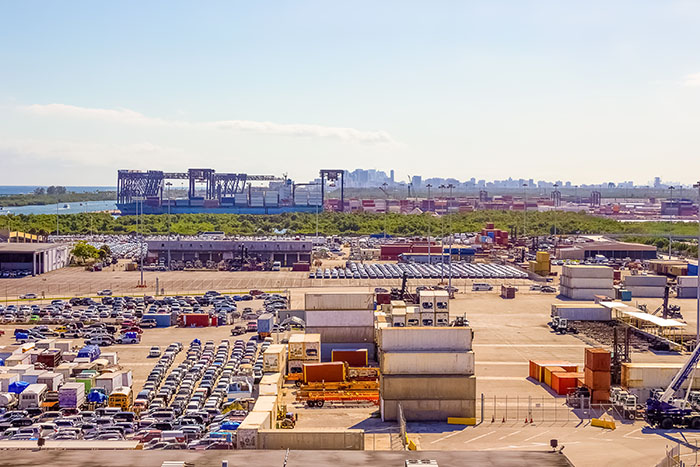 The 570 TEU National Glory will primarily carry cargoes that would traditionally have been hauled by truck from Houston to Port Everglades (pictured). Photo credit: Shutterstock.com.

A new fortnightly service operated by National Shipping of America (NSA) will provide Jones Act shippers with an alternative routing from South Florida to Puerto Rico via the US Gulf.

MARAD established the Marine Highway system in 2007 in an effort to reduce truck traffic on major roads by increasing the use of waterborne transportation. The system currently includes 25 routes spanning coastal areas surrounding the US mainland and island territories, as well as inland waterways and the Great Lakes.

Sailing on the M-10 Marine Highway connecting Houston and Everglades with San Juan, Puerto Rico, the 570 TEU National Glory will primarily carry cargoes that would traditionally have been hauled by truck from Texas to South Florida, “thereby reducing traffic and emissions and improving efficiency,” NSA and Port Everglades said in a joint statement. According to Port Everglades CEO Jonathan Daniels, the NSA string is the only direct container service connecting South Florida with Puerto Rico.

Torey Presti, president of NSA, said the new service has “economical, environmental, and safety advantages, with the objective of taking trucks off the road. The second leg will provide South Florida shippers to Puerto Rico the fastest transit time to San Juan with a Friday evening close at [Port Everglades] and arrival San Juan Wednesday morning.”

Jacksonville-based TOTE Maritime operates a twice-weekly service between North Florida and San Juan with two 3,100 TEU vessels capable of running on liquefied natural gas (LNG), the first of their kind when introduced in 2015. The TOTE string offers a three-day transit time, with the vessels departing the Port of Jacksonville every Tuesday and Friday and arriving in San Juan on Friday and Monday, respectively, according to the carrier’s online service schedule.

Section 27 of the US Merchant Marine Act of 1920 — better known as the Jones Act — requires that all ocean cargo vessels operating strictly between US states and territories be built and flagged in the US and crewed by US citizens. Economists and lawmakers have at various times argued for its repeal on the basis that it ultimately raises the cost of consumer goods shipped to Puerto Rico, Alaska, Hawaii, and Guam, but have been met with strong resistance from supporters, who counter that the regulation is necessary to ensure the country’s national defense and support US shipbuilders and inland and ocean carriers in domestic markets.

How to Improve OTIF: 15 Tips for On Time and In Full Delivery
END_OF_DOCUMENT_TOKEN_TO_BE_REPLACED