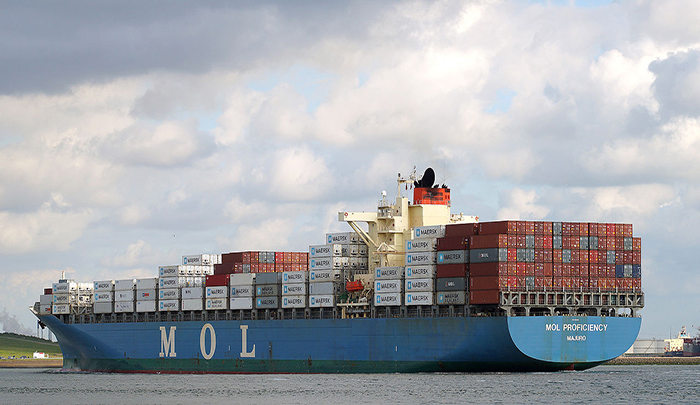 The three shipping firms, which also include NYK Line and "K" Line, reported their financial results for the first nine months of fiscal 2015 as warnings that carriers are in for a tough 2016 continue to grow.

Slumping freight rates and cargo volumes offset lower fuel costs and a weaker yen against the U.S. dollar for the big three, as the shipping industry as a whole is expected to continue to struggle against oversupply and weak demand.

MOL’s revenue dropped 2.1 percent in the first nine months of fiscal 2015 from a year earlier to 1.31 trillion yen on a consolidated basis while group net profit plunged 46.6 percent to 13.2 billion yen.

It will be MOL’s first full-year group net loss in three years. The company posted a group net profit of 42.3 billion yen in the last fiscal year.

MOL expects to slip into the red in the current fiscal year as it plans to book an extraordinary charge of up to about 180 billion yen resulting from the disposal of vessels in the container shipping and dry bulk divisions.

“In regard to the container ship business, we will reinforce its business structure and forge ahead to improve the bottom line, centered on thorough efforts to capture more profitable cargoes, based on reducing fixed costs through rationalization, mainly on North-South routes, and fleet reductions focused on mid-size vessels. As soon as the details of each measure are determined, we will separately announce them,” MOL said in an earnings release.

NYK Line’s revenue edged down 0.9 percent in the first nine months of fiscal 2015 from a year earlier to 1.76 trillion yen on a consolidated basis as net profit tumbled 19.8 percent to 22.8 billion yen.