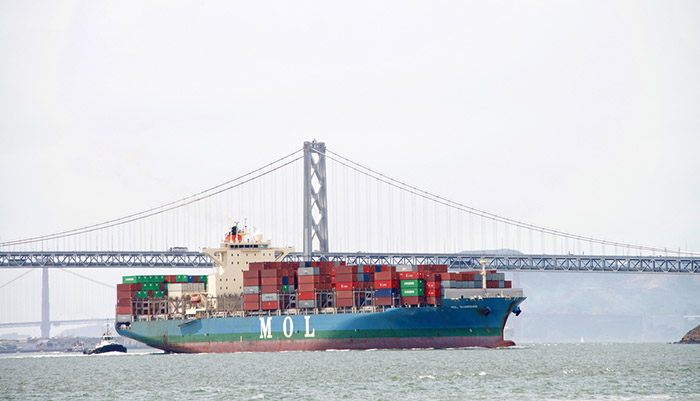 The merger of Japan's Big Three container lines will create some certainty in the industry, but questions remain about the overall impact the decision will have on freight rates.

With no turnaround for container shipping in the foreseeable future and cost cutting the only means to survival, the three largest Japanese shipping companies are merging into a new company that will launch in 18 months.

The deliberate pace of the merger of the container operations of NYK Line, MOL, and “K” Line into a single, yet-to-be named company should be a comfort to shippers. The plan to create a new company in July and commence operations in April 2018 is an island of stability in swirling seas of overcapacity and financial uncertainty over the health of shipping partners in the wake of Hanjin Shipping’s collapse and poorly-implemented mergers. The risk of another Hanjin, among these three at least, is next to zero.

However, the scale of the announced plan — to create a wholly new company out of three historically competitive organizations that are part of different keiretsu — is sobering in its ambition. MOL traces its roots to 1878, NYK to 1885, and “K” Line to 1919, and they have long competed intensely on their home turf.

To “establish a culture that will welcome and rise to any challenge, utilizing the best practices of the three companies,” as they jointly announced on Monday, will be an extraordinary challenge that requires a highly disciplined integration and neutral leadership, since all three will be minority shareholders.

Although the alternative was a drain on cash, profitability, and shareholder value in perpetuity for the parent companies. The Big Three noted that demand has exceeded supply only twice in the past 12 years and that an imbalance is forecast through at least 2018. They stated the obvious in noting that only through scale, in other words a competitive cost structure that can withstand relentless rate competition, will it be possible to compete with the increasingly large-scale operations that now dominate the industry.

With 1.4 million 20-foot-equivalent units, the new company will be the sixth-largest container line in terms of capacity deployed. MOL, NYK, and “K” Line are currently ranked at No. 11, No. 12, and No. 15, respectively, according to maritime analyst Alphaliner.

“The three Japanese companies have made efforts to cut cost and restructure their business, but there are limits to what can be accomplished individually,” they said.

It wasn’t just the need to become larger and more cost efficient that drove the announcement on Monday. It was the recognition, especially after a string of mergers, acquisitions, and failures just in 2016, that the industry is headed irrevocably in the direction of unsustainable financial performances, and the Japanese lines could no longer fail to respond.

“Since last year in the liner container ship industry, the movement to increase competitiveness by expanding operational scale through merger and acquisition has been actualized, and the business model itself has been drastically changed,” “K” Line said on Monday. “Now, the three Japanese shipping companies have come to share the same thought, recognizing that in order for us to keep up and compete with these overseas carriers, which will be developing larger-scale operations from now on, what we need is not only to properly grasp market needs and then offer high-quality services, but also to enlarge the business scale.”

Unlike recent mergers such as Cosco and China Shipping, the creation of a so-called “Japan Line” will not upset the current alliance membership. All three lines are members of the Transportation High Efficiency, or THE Alliance, which will proceed as planned with a rollout in the spring of 2017. The Japanese carriers will remain independent participants in the vessel-sharing agreement through 2017.

“This will not have any material impact on THE Alliance, subject to the usual consortia regulatory clearance process, it is fully expected to go ahead as planned,” a source close to the matter told JOC.com.

Not mentioned in the announcement was the potential to create a pricing advantage through consolidation, not just because it’s politically sensitive, but also because it’s far from a sure thing. Whether or not having fewer container lines — six are or will be merged, acquired, or put out of business so far in 2016 — will actually strengthen pricing is a hotly debated issue.

Some believe that simply having fewer salespeople on the street empowered to drop prices to get cargo will put the brakes on out-of-control discounting. Fewer, larger organizations may yield an industry-wide culture of restraint and metrics-based decision making that results in more aggressive and effective capacity management, for example.

Others, including well-placed liner executives, believe ocean carriers will always price to fill their ships, no matter how few of them there are, and that individual companies’ circumstances are always so different as to make at least one of them at any given time price for market share versus profitability.

If the carriers end up in certain years having a price advantage, it will be pure luck, the reasoning goes. A letup in vessel ordering, for example, might coincide with a pickup in economic growth that allows the liners to charge sustainable rates. Although explicit in the announcement on Monday was that nothing so fortunate is anywhere in sight.

Slowing trade growth and excess capacity have created “an adverse supply and demand imbalance environment, which has significantly undermined long-term industry financial stability and future investment sustainability,” NYK said in a notice to customers on Monday.

There were other points worth noting as well. The carriers said they will include most marine terminal assets in the merged company. That reinforces an existing and arguably growing alignment between liner and terminal businesses epitomized by the Sept. 22 Maersk Group reorganization that will draw APM Terminals closer to Maersk Line. It is undeniable that terminals are choke points in the container supply chain and control over terminals is demanded by customers seeking reliable service.

Although it was not stated, it is hard not to see the hand of government in the announcement on Monday, which avoids a global embarrassment like the Hanjin collapse and keeps the companies controlled in Japan. Each of the three could have been an interesting takeover target given their access in the insular Japanese market, and rumors were flying in recent weeks that outsiders were in pursuit.

Those rumors can now safely be put to rest.

Could this be perceived to be

Permalink Submitted by tjadamski@aol.com on Oct 31, 2016 10:28AM EDT
Could this be perceived to be a monopoly.

A monopoly of what? combined