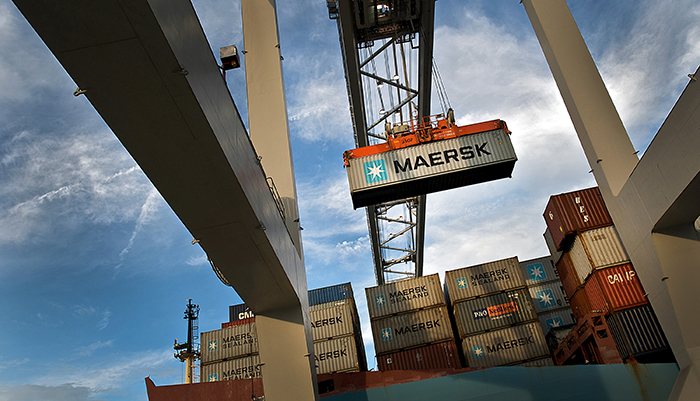 Analysts from Drewry, Alphaliner and Reuters all predict that Maersk Line will post a loss in the second quarter.

In an industry always searching for bellwethers, the first-half financials of Hong Kong’s Orient Overseas Container Line offer an indication of what to expect from Maersk Line when the Danish carrier delivers its second-quarter results on Friday.

Like Maersk Line, OOCL is a member of the exclusive club of container shipping companies that usually make a profit, but the weak market conditions cause the liner to slump to its first interim loss in seven years.

But no matter how well managed a carrier is, there is no escape from the weak demand and excess vessel supply that has been dragging down freight rates and deeply eroding shipping’s revenue earned per 20-foot-equivalent units. It led to Maersk Line's first-quarter break-even result and is expected to be reflected in the second-quarter financials.

“It is going to be ugly,” was the blunt assessment of Alphaliner’s Tan Hua Joo.

Fellow maritime analysts Drewry laid out just how ugly the results will be, expecting the average revenue per 40-foot-equivalent unit to have fallen 17 percent in the second quarter to $1,869. This is almost $400 less than the revenue per FEU earned in the same period of last year and the analysts are expecting Maersk Line to fall into the red in the second quarter with a $57 million net loss.

The container shipping industry is probably better judged on earnings before interest and tax but according to Drewry’s forecast this figure will reflect a loss of $63 million in the second quarter. A poll of Reuter’s analysts predicted Maersk Line would deliver a net loss of $47 million.

Drewry gave reasons for its negative second half outlook for the Danish carrier. “Development of freight rates is significantly weaker than expected, recovery at the beginning of July doesn’t seem sufficient and sustainable — effectively a washout peak season is in the offing, in our view — and bunker prices have increased throughout the second quarter rendering a cost disadvantage,” the analyst noted in a report.

Another top 10 carrier, Hapag-Lloyd, also announced its interim results this week and provided another example of how destructive low freight rates are to a container line’s balance sheet. The German line, which is busy digesting CSAV after a 2014 acquisition, reported a $110 million second-quarter loss and a $159 million first-half loss.

Average revenue per TEU fell almost 20 percent in the second half compared with the same period in 2015.

None of this is good news for Maersk Line. Apart from a dismal operating environment, the world’s largest shipping group is in the early stages of regime change with the former liner division chief executive officer Soren Skou recently elevated to group CEO at the expense of former boss Nils Andersen. Skou will retain the Maersk Line CEO portfolio, emphasising the importance of the group’s largest division.

The second-quarter financials will be the first set of group-wide results that he will be delivering and they come at a time of restructuring at the carrier. Maersk Group is in the middle of a strategic and structural review of its businesses that is being led by Skou, and this has seen ratings agency Standard & Poor’s place the company on a negative credit watch.

“We understand that the disposal of one or several of Maersk’s main business units could form part of the review’s outcome, and we think that such a split would hurt the group’s business diversification,” S&P noted.

Immediately after it was announced that Andersen had been replaced, reports emerged that the company was considering splitting up its five core business areas in addition to container transport. These include oil tankers, drilling, terminals and logistics and marine services.

Maersk Group Chairman Michael Pram Rasmussen told Danish media that the board was considering whether it made sense to break apart the five businesses.