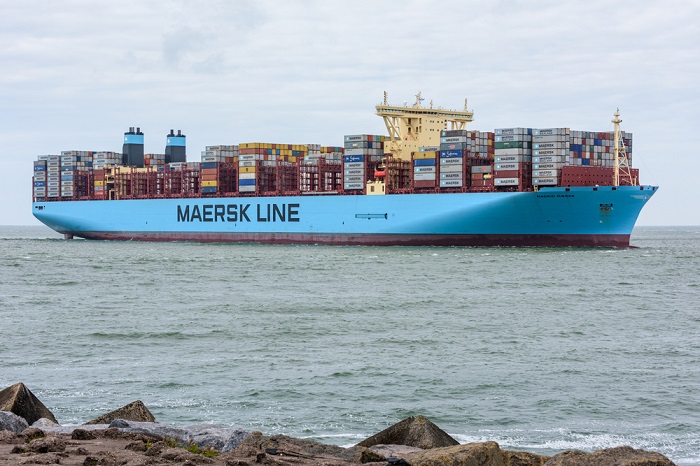 Maersk Group reported a profitable quarter at $191 million, although the July-September result was a loss of $114 million as unit costs were pushed up by a 47 percent increase in bunker prices compared with the third quarter of 2017. Photo credit: Shutterstock.com.

The third-quarter earnings of Maersk and HMM, released Wednesday, send a warning to the container shipping industry of the challenge in recouping higher bunker fuel costs that will only go up further when the global low-sulfur fuel rule takes effect.

Maersk Group reported a profitable quarter at $191 million, but unit costs were pushed up by a 47 percent increase in bunker prices compared with the third quarter of 2017.

Once continued operations and impairment losses were factored in, Maersk Group recorded a $251 million third-quarter profit, up $100 million from the January through September period. The Maersk Line segment reported earnings before interest, taxes, depreciation, and amortization (EBITDA) of $925 million, an increase of 13.5 percent year over year.

By contrast, HMM crashed to a $147 million net loss in the third quarter that it blamed on high fuel prices and weak rates. The poor result follows a second-quarter loss of $242.7 million.

HMM has 20 mega-ships on order — 12 23,000-TEU and eight 15,000-TEU vessels — and in an indication of its sensitivity to the market after posting the quarterly losses, the South Korean carrier pledged to “put its utmost efforts to stably secure additional cargoes to fill up the newly ordered 20 eco-friendly mega-containerships until delivery.”

Both carriers highlighted the need to prepare for the low-sulfur fuel costs that will be incurred from January 2020 when the International Maritime Organization (IMO) will introduce a 0.5 percent sulfur cap on marine fuel.

HMM said it planned to introduce a new bunker adjustment factor (BAF), while Maersk said its new BAF announced earlier was designed to recover increases in fuel costs estimated to exceed $2 billion a year. The BAF will allow the carriers to try to pass on the costs to customers.

The enormous benefits of the trade mix gained by its Hamburg Sud acquisition were reflected in the third-quarter results of Maersk Line, with a 32 percent increase in revenue driven by a 27 percent rise in volume that even managed to push up the average freight rate by 5.5 percent.

While transported volume on the east-west trades rose by 14.2 percent to just below 1.1 million TEU from July through September, the volume contributed by Hamburg Sud on its north-south routes soared by 24 percent to more than 2.1 million TEU. Volume on the intra-regional trades was up 65 percent, with a 19 percent increase in average rates, and average freight rates on both the east-west and north-south trades increased by 5 percent.

Maersk said that global volumes increased compared with last year, but the demand was weaker than expected. The carrier said Asia-Europe trade disappointed the most because of lower imports from Asia to the UK, Turkey, and the Mediterranean, but lower-than-expected volumes were realized on most trades. In the third quarter, freight rates declined on Asia-North Europe by 3.7 percent, and Asia to the Mediterranean was down by 9.3 percent, while Asia-US West Coast trade was up by 11 percent.

Spot rates on the Hong Kong-Los Angeles route are almost double what they were in Week 46 last year, with the Drewry Container Freight Rate Insight benchmark at $2,652 per FEU. The weekly rate movements are tracked at the JOC Shipping & Logistics Pricing Hub.

But overshadowing all gains in freight rates and volume were bunker fuel costs that reached $1.3 billion in the third quarter compared with $809 in the same period of 2017. Out of the increase in bunker cost, $423 million was due to higher average bunker prices while the remaining increase was due to increased consumption from Hamburg Sud.

Maersk said the emergency bunker surcharge (EBS) that was implemented at the end of the second quarter and a tighter supply-demand balance led to an increase in the global average freight rates in the third quarter compared with the second quarter. However, the carrier noted that while the fuel price was recovered quarter on quarter, the rate development was “not fully reflected in the results” as bunker prices continued to increase through the period.

This inability to fully recoup rising bunker fuel costs is a major concern to a container shipping industry that is trying to find a way to cope with a global rule that will increase the sulfur emission limit on fuel oil from January 2020. The regulation will cost the industry an estimated $13-$15 billion a year.

Maersk believes the ruling could lead to retrofitting of a significant part of the global fleet during a three- to five-year period beginning in 2020. The carrier has committed $80 million to retrofitting exhaust scrubbers in preparation for the regulation, but the carrier said most of its fleet would rely on compliant low-sulfur fuel when the new regulation was implemented.

Asked in an earnings call whether there would be pricing difficulties on Asia-Europe between ships with and without scrubbers, Maersk Line chief commercial officer Vincent Clerc said the carrier had communicated what its BAF was going to look like, and the discussion with customers would be around that formula and not around the cost of scrubbers.

The carrier said forward markets indicated bunker prices would increase by a further 4.9 percent in the fourth quarter compared with the third quarter this year, but after that, forward market pricing pointed to a 20 percent decline in bunker prices by the last quarter of 2019.

Maersk said the anticipated decline was driven by a wider bunker-crude oil spread, which reflected the market’s view of the impact of the IMO 2020 sulfur regulations on demand for high-sulfur bunker fuels.

In their assessment of the container shipping market going into 2019, both Maersk and HMM were subdued in their outlooks. HMM believes there will be continued growth in the Asia-US markets but slow growth on the Europe trades.

“However, a risk of volume decrease attributed to [the] US-[mainland] China trade war also resides in the shipping market,” the South Korean carrier warned.

Maersk also issued a caution for the year ahead. “Uncertainties relating to the strength of container demand in 2019 pose a downside risk to freight rates in general. Alongside [that] the delivery of larger vessels on the Asia-Europe trade poses additional specific risk[s] to the demand supply balance on that route,” the carrier noted.