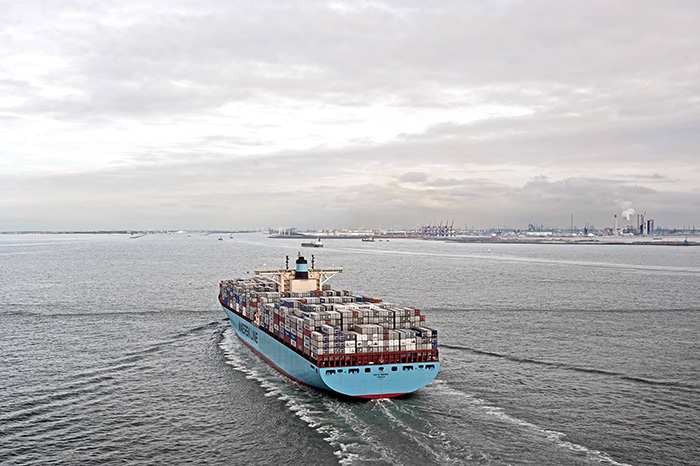 Maersk Line reported an annual loss of $376 million for 2016, while at the same time forecasting that its 2017 profit will be a $1 billion improvement on the negative 2016 results, which were described by CEO Soren Skou as “unsatisfactory.”

Global demand for seaborne container transportation during 2017 was expected to increase by 2 to 4 percent, and the Danish carrier said in its results statement that rising freight rates would drive up Maersk Line’s earnings this year.

"In the fourth quarter, the net addition of nominal capacity went down significantly — much less deliveries and record scrapping led to demand exceeding supply, and it looks like this will continue at least for another few quarters," joint Maersk Group and Maersk Line CEO Soren Skou said in an earnings call with reporters.

"We believe the industry is at an inflection point, and we see encouraging signs for 2017, and that is why we feel comfortable with improving the Maersk Line profits by $1 billion over the 2016 result."

Skou said another reason he was confident in achieving the high profit turnaround was because the Asia-Europe service contracts had closed and they were "significantly higher" than those achieved in 2016. Trans-Pacific service contract negotiations will only be concluded after May, and Skou said he also expected those to close much higher than last year.

Although the rates have improved recently, for most of 2016 freight rates went the other way, leading Maersk Line down the now familiar industry path of rising volume and declining revenue.

“We delivered an underlying profit of $711 million, in line with guidance but clearly unsatisfactory. The main driver of the underlying result was a loss in Maersk Line,” Skou said. That helped drag parent Maersk Group to a $1.9 billion loss for the year, although significant impairments at Maersk Drilling and Maersk Supply Service also contributed.

Revenue for 2016 of $20.7 billion was 13 percent lower than that achieved in 2015, driven by an 18.7 percent decline in average freight rates to $1,795 per 20-foot-equivalent unit, Maersk said in its results statement. Not even a 9.4 percent increase in container volume to 10.4 million TEU could offset the effect of poor rates that fell to record levels in the first quarter of 2016. The weekly rate movements are tracked on JOC.com's Market Data Hub.

Liner shipping companies such as Orient Overseas Container Line and the three Japanese carriers all reported strengthening fourth quarter demand in 2016 and Maersk Line was no different. Maersk said demand growth was low in the first three months of 2016 but improved in the second half, especially in the fourth quarter.

Although this partly reflected the contrast to very weak demand in late 2015, the carrier said it also was an indication of improvements in the global economic environment. Container demand on the east-west trades was decent in 2016, driven by higher US imports supported by the US economic expansion and the strong US dollar. European imports developed more softly and in line with GDP growth in the region.

However, the devastating impact of low freight rates for the carrier could be seen in the trade numbers. On those east-west trades where demand rose in the second half, transported volumes grew 11.4 percent year-over-year to 3.7 million TEU, whereas revenue fell almost 20 percent. Maersk said Asia-North America revenue declined the most because of greater competition and increased backhaul cargo at lower rates.

In its results statement, Maersk Line reiterated that the cooperation between the 2M Alliance partners of Maersk Line and MSC and South Korean carrier Hyundai Merchant Marine (HMM) would be outside the scope of the alliance.

In December 2016, the 2M Alliance partners of Maersk Line and MSC announced a new strategic cooperation on the east-west trades with HMM that is scheduled to begin in April 2017 and is subject to regulatory approval.

HMM will receive access to the 2M network through a combination of slot exchanges and slot purchases. Maersk Line and MSC will charter and operate a number of vessels from HMM.

Regarding its acquisition of Hamburg Süd, expected to be completed by the end of 2017, Maersk said it would enable the liner division to offer an improved value proposition on its north-south trades and in the reefer segment. Hamburg Süd will continue to operate as a separate brand and will keep its local organisations and headquarters in Hamburg.

Maersk highlighted the high inflow of new container vessels in the last part of 2015 and in the early part of 2016 that continued to hurt the container industry. The carrier said this added to the existing excess supply as global container demand remained subdued during the year.

“These supply-demand developments led to significant downwards pressure on freight rates and industry revenues, especially in the first half of the year,” the carrier noted.

Record scrapping of container lines was reported by the end of 2016, but Maersk Line decided in the first quarter of 2017 to recycle 1 percent of its fleet in the form of eight Panamax-class vessels that it said were at the economical end of their lives.

A total of 934,000 TEU (136 vessels) were delivered and 665,000 TEU (201 vessels) were scrapped during 2016, according to industry analyst Alphaliner. Deliveries were dominated by the 10,000-plus TEU vessel segments, and mainly smaller and midsized vessels were scrapped. The average scrapping age continued to decline and was 19 years in 2016, which compares with an average of 30 years in 2008 where the scrapping age was at its highest.

The Maersk Group announced a new strategy in September 2016 that involves separating the transport and logistics and the oil and oil-related businesses into two divisions. The synergy efforts expected to deliver cost savings of around $600 million over the next three years.

Transport & Logistics, which will comprise Maersk Line, APM Terminals, Damco, Spitzer, and Maersk Container Industry, will be led by Skou. The Energy division will consist of Maersk Oil, Maersk Drilling, Maersk Tankers, and Maersk Supply Services and will be headed by Claus Hemmingsen, who is also group vice CEO.

“As communicated at our Capital Markets Day in December, our top priorities for 2017 remain integrating our transport and logistics businesses, taking out cost in APM Terminals and Damco, closing the Hamburg-Süd acquisition, as well as progressing the work on finding structural solutions for each of our oil and oil-related businesses,” Skou said.