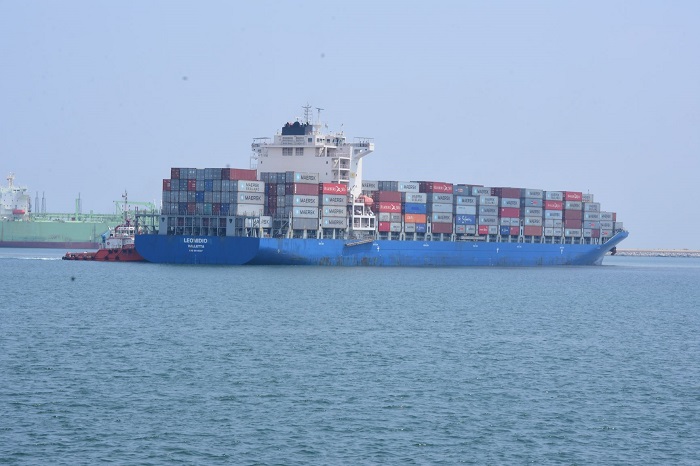 Above: The Maersk Leonidio at the port of Ennore. Photo credit: Maersk India.

Maersk Line (India) is touting the port of call change from Chennai to Ennore on its intra-Asia loop as an effort to achieve greater supply chain efficiency, as freight volume to/from the emerging market economy grows at a healthy rate.

The carrier, which handles roughly 20 percent of India’s container trade, has ended its operations at Chennai, citing congestion and related productivity issues, and has, instead, added Ennore — just 15 miles away — to its weekly Chennai Express Service (CHX). The change took effect with the Maersk Leonidio calling at the Adani Ennore Container Terminal (AECT) on Saturday.

“Port Ennore has the potential to be the new gateway of South India, and we are geared up to support our local customers to move their cargo to and from markets around the world. In addition to no-commodity restrictions at Ennore, Maersk can provide seamless, end-to-end solutions from here,” Steve Felder, Maersk’s managing director for South Asia, told JOC.com.

Felder also said the company is in a position to offer its customers inland transport and other ease-of-doing-business solutions, including end-to-end logistics, reefer handling technology, online payment, and trade finance services.

“The additional port capacity and world class infrastructure of Ennore enable us to offer supply chain benefits for exporters and importers in terms of reduced costs, shorter transit times and faster turnaround cycles,” he added.

The new CHX rotation is as follows: Qingdao and Tianjin, China; Busan, South Korea; Shanghai and Nansha, China; Tanjung Pelepas, Malaysia; Ennore, Krishnapatnam and Visakhapatnam, India; Tanjung Pelepas; Busan, and back to Qingdao.  The weekly service offers a 24-day transit from Ennore to Busan on the eastbound leg and on the westbound direction, it has a 21-day transit from Qingdao to Ennore, Maersk officials stated.

Further, Maersk believes that besides benefiting from sufficient container capacity — 800,000 TEU annually in the first phase — along with a 15-meter (49-foot), deep draft, Ennore’s multi-cargo handling capabilities — particularly for automobile and heavy goods — will support its long-term growth prospects in the region. Illustrating that out-of-gauge cargo interest, Maersk handled a 16-ton shipment of windmill blades on the Maersk Launceston — also deployed in the CHX — when it called Port of Krishnapatnam in August, which the carrier claimed was its heaviest-ever lift from South India.

Prolonged, lackluster demand has been a major problem for ocean carriers with upsized tonnage, and, as such, the aforementioned rebalancing freight mix to include breakbulk/oversize cargo is seen as a strategic “cushion” for vessel space optimization and scalability.

Statistics compiled by JOC.com show Ennore handled 30.4 million metric tonnes (33.5 million tons) of cargo in fiscal 2017-2018, which ended March 31, flat year-over-year.  April-to-September volume surged 20 percent to 16.6 million tonnes from 13.8 million tonnes in the same first fiscal half of 2017, and those strong uptrend signs could prove to be a boon for Maersk, as well as its peers considering introducing a direct call at Ennore.