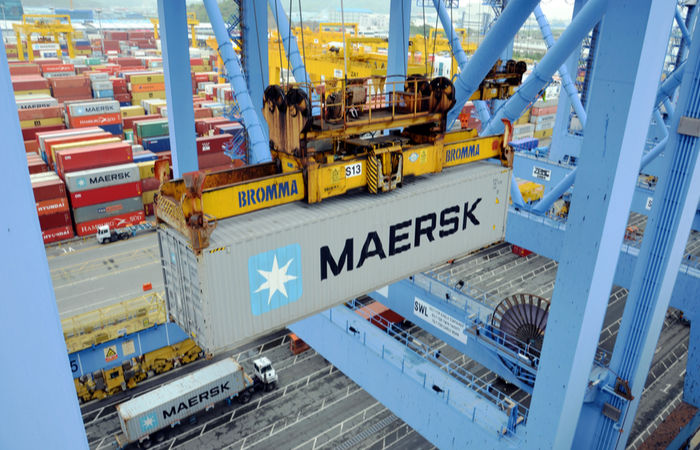 Maersk has reported gains in revenue, rates, and utilization as its march to greater profitability continues. Photo credit: Shutterstock.com.

Maersk Line’s focus on profitability ahead of gaining volume and market share has shown through in its second quarter results. The Copenhagen-based ocean carrier increased average rates, improved its operating margins, trimmed unit costs, and made modest gains in expanding non-ocean revenue as part of its transformation into an integrator.

It was the fourth consecutive quarter of improved profitability, with the ocean segment reporting an earnings before interest, taxes, depreciation, and amortization (EBITDA) margin of 14.9 percent, just ahead of Hapag-Lloyd’s margin of 14.7 percent for the second quarter.

“If you look at what happened in the second quarter, most of the improvement was from factors that we have controlled,” Maersk Group CEO Soren Skou said during a conference call with analysts on Thursday. “Rates went up by 1.5 percent and that is nice, but unit costs came down by 3.5 percent and we got our commercial performance back in line with the market growth.”

Lars Jensen, CEO of SeaIntelligence Maritime Consulting, said the result brought Maersk's profitability back up to the same level of performance as Hapag-Lloyd.

“It is also clear that the result is due to a strong focus on improving profitability on existing business rather than going for volume and market share,” Jensen said in a LinkedIn post.

“Volumes grew only 1.4 percent, which was below global market growth and hence Maersk have once more reduced their global market share slightly. However, this paved the way for a slight freight rate increase in a market where rates otherwise have been under pressure.”

Skou said the 1.5 percent increase in average freight rates was driven by a continued focus on improving margins across all east-west, north-south, and intraregional trades. However, he noted the intraregional trades had the lowest rates, and increasing volume in those lanes had the effect of dragging down the average rate levels.

Maersk is planning for a low-growth market in the short term, with existing and threatened US tariffs potentially lowering global volume by 1 percent in 2020. The largest global container line expects container volume growth to expand 1 to 3 percent this year, warning growth will be on the lower end if US-China trade tensions keep escalating.

In terms of its effort to become an integrator, Maersk pointed to non-ocean revenue rising 2.1 percent year over year to $2.9 billion, excluding the impact of the closure of container production facilities. By comparison, ocean revenue accounted for more than $14 billion in the second quarter, showing the wide gap the company has to close to reach Skou’s goal of an even split between revenue from ocean and landside services.

To strengthen the technology backbone upon which its integrator effort hinges, Maersk said it plans to make a larger share of its approximately 6,000 IT personnel directly employed instead of contracted, as half of the workforce is now.

As other carriers order mega-ships — Evergreen Marine this week committed to ordering and chartering in 11 23,000-TEU ships — the Maersk CEO reiterated the carrier’s plans to avoid growing capacity.

“We maintain that we want to stay around 4 million TEU of deployed capacity,” he said. “We will need some extra tonnage chartered in because we have ships retrofitting scrubbers, and have invested a little more capacity in slow steaming this year. But we want to remain disciplined on capacity and stick to our guidance of 4 million deployed capacity because it helps drive utilization up and unit costs down.”

Another carrier executive with no plans to order new mega-ship capacity is Hapag-Lloyd CEO Rolf Habben Jansen, who denied market rumors that the company was planning to order six new ships of 23,000 TEU.

According to a report from maritime analyst Alphaliner, Habben Jansen said Hapag-Lloyd has “no plan right now to order any vessels, so you should certainly not expect any orders from us in 2019.”

With the International Maritime Organization's (IMO) 2020 low-sulfur fuel mandate looming, Skou said Maersk was determined to further improve fuel efficiency, an effort the carrier had already begun by slow-steaming vessels. From Jan. 1, 2020, the IMO will lower the maximum sulfur cap for marine bunker fuel, a change the container shipping industry has estimated will add $10 to $15 billion to its total annual fuel bill.

“We expect to continue to improve fuel efficiency, and there are a few levers we can pull,” Skou said. “One is improving the speed of the network, and in the past couple of quarters, we have been able to significantly improve reliability. When ships are on time, they have to spend less time speeding up to meet schedules. As 2020 looms, the best thing we can do to mitigate the impact of that is to use less fuel.”

According to SeaIntelligence, Maersk Line improved its global on-time schedule performance by 6.7 percentage points over the first quarter and 8.4 points year over year to 85.5 percent in the second quarter.