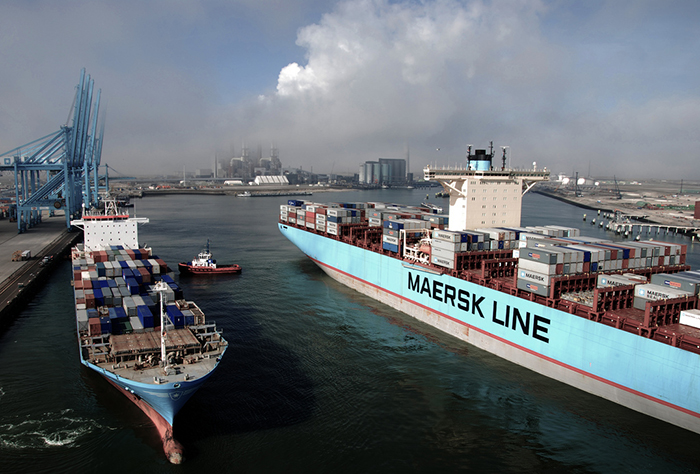 LONG BEACH, California — The impending shakeup of the membership in three of the four alliances among global container shipping lines will be difficult for beneficial cargo owners over the next year or more, but they may benefit from the changes in the long run, a top Maersk executive said here at the JOC’s 16th annual TPM Conference.

“The redesign of networks of the magnitude they are talking about will be disruptive for the customer in the short term because if a carrier moves from one alliance to another both alliances need to redo their networks,” said Vincent Clerc, ‎chief trade and marketing officer at Maersk Line.

“Capacity will vary from week to week for a while and products will change and so on,” he said. “But in the long run, it all depends on the network choices that each of the alliances makes, so it could be good.”

The realignment of three of the four global alliances is being touched off by the merger of the container fleets of Cosco and China Shipping and by CMA CGM’s acquisition of NOL and its container carrier APL. Cosco belongs to the CKYHE Alliance, China Shipping to the Ocean Three Alliance, and APL to the G6 Alliance. As a result, all three of these alliances will undergo some kind of reconfiguration as carriers switch in and out of them over the next year or more.

“It’s a sign that the industry is under a lot of pressure to find cost savings and synergies because the rates are under pressure,” Clerc said. “In an industry where scale benefits are an important component of production costs for a lot of lines, the incentive to pursue mergers and acquisitions has increased and you are seeing this play out now.”

Maersk’s 2M Alliance with Mediterranean Shipping Co, which still has another eight years to run in its 10-year agreement, would remain in place while the other alliances get sorted out. “The 2M is stable and will remain stable and will continue to work when the alliance shakeup is being discussed,” Clerc said.

That would give it a leg up if the other alliances are in the middle of realignment and network redesign. Carriers in the other three alliances can move in and out of them on notice of a year or a year and a half.

Because of its 2M Alliance and its strategy of only deploying capacity in line with global market demand, Maersk Line is enjoying a very high level of vessel utilization. “It’s part of our steamship strategy not to deploy tonnage in excess of what there is demand for because that capacity doesn’t get paid for and it’s not very good business,” Clerc said.

Maersk Line has cut capacity on the Asia-Europe route, on the Pacific and on all global services when demand has fallen. “We don’t control demand; we don’t create demand through our prices; there is not one container more moving because rates are low or one container less because rates are high,” Clerc said. “What we do control is our supply, so we work diligently to make sure our supply is in line with demand so that we have the lowest possible cost.”

Carriers have realized that the global container market will not return to the double-digit annual growth levels they enjoyed prior to the Great Recession of 2008-2009, so they have had to seek cost savings through the synergies provided by consolidation in alliances or through mergers and acquisitions.

“The trend is toward more subdued growth,” Clerc said. “In this world, being able to create synergies and lower costs is actually an imperative to be successful in this industry.”