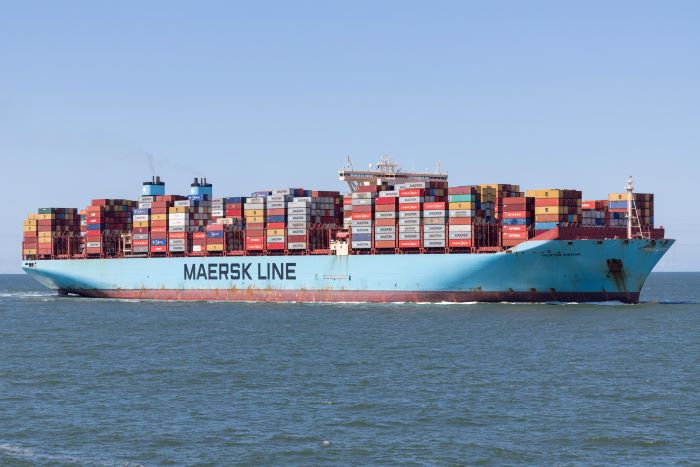 The World Shipping Council, in a July update of its “Containers Lost At Sea” report, said an average of 779 containers were lost annually in the three-year period from 2017 through 2019. Photo credit: Shutterstock.com.

Maersk said Thursday it is investigating the loss of approximately 750 containers after its Maersk Essen encountered heavy seas en route from China to Los Angeles on Saturday. The second major loss of containers on the trans-Pacific trade in approximately two months has sparked questions on lashing practices on larger vessels facing severe storms.

“We view this as a very serious situation, which will be investigated promptly and thoroughly,” the carrier said in a statement. “Operations and vessel safety are our highest priority and we will be taking any necessary steps to minimize the risk of similar incidents occurring in the future.”

The 13,100 TEU, Danish-flagged Maersk Essen was en route from Xiamen, China, to Los Angeles when the incident occurred. “All crewmembers are safe and a detailed cargo assessment is ongoing while the vessel continues on her journey,” Maersk said. “The US Coast Guard, flag state, and relevant authorities have been notified.”

Maersk said in a subsequent statement that the vessel will call APM Terminals in Lazaro Cardenas, Mexico, on January 29 “for cargo survey, port operations and initial repair.”

The incident comes less than two months after violent weather caused more than 1,900 containers to be lost or damaged while ONE Apus was en route to Long Beach, California, from Yantian, China, the largest loss of containers at sea in more than seven years.

Lars Jensen, CEO of SeaIntelligence Consulting and a JOC analyst, questioned whether the industry might have a structural problem with stowage on larger ships. In a Thursday LinkedIn post, Jensen noted that most container losses, as reported by the World Shipping Council (WSC), were modest, and when there had been major losses, the accidents were due to larger issues than rough weather. For example, MOL Comfort broke in two off the coast of Yemen in 2013, losing 4,300 containers, and MV Rena lost 900 containers after running aground off New Zealand, Jensen said.

“Now Maersk Essen has lost 750 containers overboard — also in a Pacific storm,” Jensen wrote. “Hence the question — is this a fluke twice in a row — or a sign that we might actually have a structural problem with stowage when vessels are consistently filled to brim?”

WSC, in a July update of its “Containers Lost At Sea” report, said an average of 779 containers were lost annually in the three-year period from 2017 through 2019.

How to Improve OTIF: 15 Tips for On Time and In Full Delivery
END_OF_DOCUMENT_TOKEN_TO_BE_REPLACED