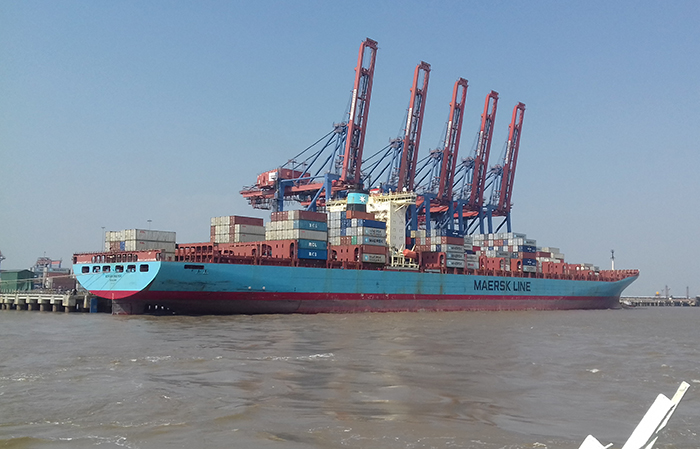 Container trade to and from India grew 6 percent year over year in the fourth quarter of 2018, with exports up 3 percent and imports up 9 percent, according to a recent Maersk Line report. Photo credit: Maersk Group (India).

Large-scale infrastructure upgrades, digitization, and various pro-trade reform efforts are combining to make India one of the “top trading destinations” in the world, according to Maersk Line, which currently transports roughly 20 percent of containerized freight moving to and from the emerging market economy.

According to the world’s largest ocean carrier, container trade to and from the emerging Asian nation grew 6 percent year over year in the fourth quarter of 2018. India’s containerized exports increased 3 percent during the period, while containerized imports swelled 9 percent, driven by a substantial inflow of metal and waste products.

“We witnessed a stable trade environment in the last quarter of 2018, due to base effects, weakening demand of goods in China, overall contraction in manufacturing around the world, and the global trade tensions between major economies,” Felder said.

Felder said the steady growth is also a clear indication that the disruptive impacts of India's recent big-ticket regulatory reforms — most notably demonetization in November 2016 and the nationwide Goods and Services Tax (GST) rollout in July 2017 — have faded.

He said India’s improved trade relations with China — at the same time Beijing was entering into a tit-for-tat tariff battle with the US — also played a role in the fourth-quarter trade performance. “India benefited from China’s decision to reduce import tariffs for several product categories from the country as it tried to minimize the impact of its decision to increase barriers to US imports into China,” said Felder.

However, trade relations between India and the US are also under strain after the Trump administration earlier this week announced an abrupt plan to withdraw zero-duty benefits long enjoyed by New Delhi under the generalized system of preferences (GSP). This action, seemingly triggered by the Narendra Modi-led government’s reluctance to provide US companies with greater market access, could adversely impact about $5.6 billion in Indian exports to the US. What’s more, the setback comes at a time when India has intensified efforts to expand its exports for a larger share in world trade, currently estimated at 1.7 percent.

Maersk said fourth-quarter export growth was primarily led by refrigerated goods and agricultural products to China, the United Arab Emirates, the US, the Netherlands, and to some extent, Algeria. At the same time, dry cargo exports remained relatively flat, save for a double-digit increase in Indian-made automobile shipments. Growth in Indian imports was driven by recyclable paper, metals, and white goods, according to the carrier’s quarterly regional market study.

“China inked a protocol with India in Q4 [the fourth quarter] to import fish meal and fish oil from the country, making it one of the key export markets for refrigerated cargo,” the report said. “It also became one of the highest contributors to the country’s export basket in Q4 with a 71 percent year-over-year increase, a trend that is expected to continue given the recent agreement that enabled ease of access for exports of various farm products, further improving the trade relations between the two nations.”

The analysis found that the country’s northwestern region dominated the growth in export-import trade. Maersk also said demand for Indian seafood from markets in China and the US has dramatically increased. “Considering the continuing trade opportunity with China, with the recent developments that opened doors for the export of fish and fish oil, refrigerated cargo has witnessed an upward trend. The category will continue to see growth in the following quarters, as a consequence of the ‘Agriculture Export Policy 2018’ introduced by the government, which is aimed at promoting organic and home-grown products,” the carrier said.

According to Maersk, surging demand from the US for Indian pharmaceutical products, which saw a 74 percent year-over-year jump in the fourth quarter, also aided the fourth-quarter overall trade growth.

Felder said the May 2018 relaxation of Indian cabotage laws, a move designed to encourage direct cargo movement instead of foreign transshipment, is a step in the right direction and that since the rule change in May 2018, New Delhi has been working harder than ever to push up transshipment handling at Indian ports. “The government recently also inaugurated an upgraded portal [named the port community system (PCS)] for the maritime sector, which will further enhance ease of doing business,” he said.

Felder added that the launching of an inland waterway route for container transportation — an 864-mile stretch between Haldia, near Kolkata, and Varanasi in Uttar Pradesh state via the Ganges River — is another testimony to the government’s committed efforts to shore up supply chain efficiency, as well as to facilitate coastal trade connectivity between India and Bangladesh. “With all these major policy reforms, and trade focused infrastructure developments like Dedicated Freight Corridor (DFC) and Delhi-Mumbai Industrial Corridor (DMIC), India is on the right track to enhance global trade as the economy is set for higher growth in 2019-20.”

“Unlike professional and large-scale farming observed in western countries, a majority of India’s agricultural produce comes from small, rural producers based in the hinterlands,” he said. “One of the most crucial challenges faced by the country’s agriculture sector is food wastage, costing the industry billions of dollars every year. An efficient ‘farm-to-fork’ cold chain network managed by skilled workforce with refrigerated containers [and] temperature-controlled warehouses along the service trail will help curtail this loss.”

For its part, Maersk said it believes it has a clear edge over rival carriers in perishable goods-handling on the strength of its specialized logistics solutions, more particularly a remote container management system for reefer operations. Anticipating solid growth, the carrier has considerably beefed up its end-to-end cold chain offerings to and from India, with Maersk (India) handling a spate of tailor-made, specialized temperature-controlled consignments for domestic exporters and importers in recent months.

In addition, the group has invested in new cold chain logistics infrastructure in the country, including the opening of a large inland container depot (ICD) in Pune, about 90 miles from Mumbai, and adding perishable goods handling services to an existing container freight station (CFS) center at Ponneri, on the outskirts of Chennai in South India.

Looking ahead, APM Terminals, a Maersk Group subsidiary, believes that with reefer trade on the rise, the establishment of “multi-commodity” perishable goods storage capabilities will be a more commercially-viable and sustainable business model. “A combination of exim [export-import] and domestic cold storage businesses will allow APMT to grow to a substantial scale, become a cold chain specialist, and build an end-to-end presence in customers' value chain,” the company told JOC.com.

The liner giant has also been quite bullish on the growth outlook for India’s breakbulk and project cargo trade. In a previous interview with JOC.com, Maersk (India) officials said the heavy-lift segment currently accounts for about 130,000 TEU but is growing at a compound annual growth rate (CAGR) of 9 percent. The carrier has been handling more oversized cargo loadings, often involving complex landside and quayside operations, at Jawaharlal Nehru Port Trust (JNPT) and other ports.

“By all indications, and depending on the demand for projects — particularly in emerging markets, this growth [of breakbulk and other project and heavy-lift cargo shipments] is set to continue,” Felder said.

As India’s container trade grows at a healthy pace — pegged at 8 percent in the first 11 months of fiscal 2018-2019 (April-February) at major public ports — the government and other stakeholders have also been working to modernize and expand port capacity and inland connectivity infrastructure to keep pace with market demands. The mammoth Sagar Mala program, which involves an estimated $180 billion investment, is a long-term effort toward that goal.