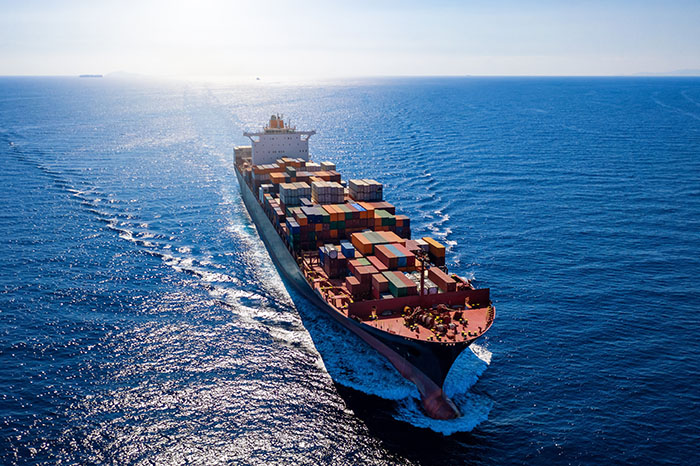 Low utilization rates could force carriers to cut container freight rates 5 to 10 percent — or to give breaks on low-sulfur surcharges — in order to fill up ships. Photo credit: Shutterstock.com.

The pressure is on container lines over the next two months to calibrate capacity amid slowing volume growth, and to get it done ahead of the global low-sulfur fuel mandate to avoid being tempted to accept lower rates when ship utilization rates drop.

At the same time, the wide range of fuel surcharge levels for which carriers are telling cargo owners to prepare suggests that fuel cost will become a competitive battleground. Those carriers with larger and newer vessels will enjoy the advantages of greater economies of scale. And those with scrubbers will be able to burn cheaper fuel and speed up vessels, according to maritime shipping analyst Alphaliner.

In private conversations with JOC.com this month, container line executives said the temptation to cut freight rates will likely increase when ship utilization levels fall below 90 percent. That’s focusing their attention on adjusting capacity, most recently manifested in the blanking of at least 37 eastbound trans-Pacific sailings in October and November, as well as the cancellation of a regular service to the US East Coast. On the Asia-Europe trade lane, carriers are blanking more than dozen sailings over the next three months.

While carriers have insisted they have no choice but to pass on the higher operating costs tied to the IMO 2020 rule, the head of one of the 10 largest lines and two executives from other carriers said they may have no choice but to be flexible on either freight rates or fuel cost pass-throughs. The executives told JOC.com low utilization rates might force them to cut cargo rates 5 to 10 percent — or to give breaks on low-sulfur surcharges — in order to fill up ships. Their hands will be forced if the supply-demand ratio weakens on the trans-Pacific and Asia-Europe lanes.

Globally, thanks to restraint in new orders, container capacity is coming into better line with demand. According to Alphaliner, global capacity next year will expand 3.3 percent, while demand will grow 3.1 percent, compared with capacity rising 3.6 percent and volume growing just 2.4 percent this year.

How demand matches up to capacity on the trans-Pacific and Asia-Europe trades is less clear, and blank sailings and the pulling out of ships to install scrubbers ahead of the low-sulfur mandate further complicate the view. Capacity this year would have expanded at a 3.6 percent clip if not for 1.2 percent of capacity being removed for scrubber installation, according to Alphaliner.

Beyond that, the IMO mandate provides “excellent cover” to remove capacity, as one carrier executive noted. Not only have container lines in the last 18 months exercised more blank sailings than in years past, but they have become more surgical in matching capacity with demand, creating a dizzying mix of cancelled sailings and extra-loaders. Although eastbound spot rates on the trade are down approximately 30 percent and 50 percent to the East and West coasts, respectively, from a year ago, the spot rates are in line with past peak seasons, excluding last year’s, according to a Sea-Intelligence Maritime Consulting analysis of the Shanghai Containerized Freight Index (SCFI). The front-loading of US imports last year to beat later-delayed tariff increases allowed some carriers to levy surcharges of up to $1,000 per container during the 2018 peak season.

That carriers have been able to keep trans-Pacific spot rates afloat relative to “normal” seasonal trends bodes well for their ability to maintain utilization rates when low-sulfur fuel surcharges fully kick in. Whether spot rates in December rise or not will reflect whether carriers were able to pass on interim low-sulfur surcharges and give a sense of how they will fare in passing on even higher fuel surcharges -starting Jan. 1, Philip Damas, director of Drewry Supply Chain Advisers, said at the TPM Asia Conference in Shenzhen, China. The temptation for carriers to give freight and fuel surcharge breaks on the Asia-Europe trade is higher, given that westbound rates have fallen to a 2019 low of $581 per TEU, according to the SCFI, down 20 percent from a year ago.

The actual increase in freight transportation cost might be minimal, as joint research by Gemini Shippers Group and consultancy Seabury Maritime forecasts an increase of up to 9 percent in all-in trans-Pacific costs. But the wide range of estimates carriers are giving to shippers on how much their fuel cost will rise per FEU — $165 to $375 to the West Coast and $275 to $625 to the West Coast — shows how carriers operating larger vessels may be able to provide more competitive all-in rates.

In the meantime, carriers are watching low-sulfur bunker fuel prices and eyeing even more scrubbers. By year-end, approximately 2.3 million TEU of capacity, equal to 10 percent of the global container ship fleet, will have scrubbers. That number will more than double to 5 million TEU by 2021, Alphaliner forecasts. Using scrubbers to burn high-sulfur bunker fuel on 35 18,000-TEU-plus vessels will allow the 2M Alliance of Maersk and Mediterranean Shipping Co. to run services at higher speeds, according to Alphaliner.

Scrubbers will increasingly look like a smart move for carriers if the approximately $200 spread between low- and high-sulfur fuels stays in line as it has since the summer.