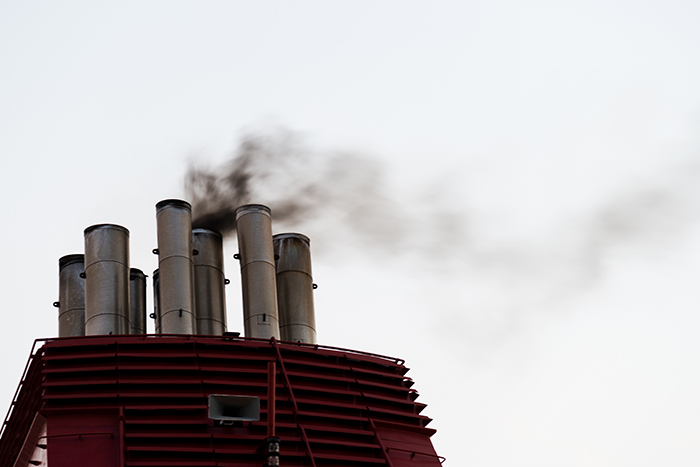 Slower vessel speeds have contributed to lower fuel consumption and an 18 percent reduction in CO2 emissions over the past 10 years, according to the ship broker Clarksons. Photo credit: Shutterstock.com.

Lowering ship speeds is seen as the most viable way to achieve a near-term commitment in the landmark 2018 maritime decarbonization agreement "to peak GHG emissions from international shipping as soon as possible" as a down payment on the long-term commitment to reduce absolute emissions from shipping by 50 percent by 2050, compared to 2008 levels.

Yet last week, in mandating efficiency upgrades for new container and cruise ships, the Marine Environmental Protection Committee of the IMO postponed consideration of short-term measures, such as slow-steaming, and even then it was unclear whether container ships, which have already lowered their speeds significantly, would ever be covered by such a regime.

According to one delegate, governments at the IMO last week did not do enough to take concrete actions to cut emissions from shipping, “meaning we still don’t know how shipping will reach its targets laid out in its plan.”

Mandatory slow-steaming dead in the water?

Though it was agreed to take up speed reduction at a subsequent meeting, the fate of the measure irrespective of ship type was unclear following IMO’s meeting. As an example of the obstacles to any short-term agreement on how to peak greenhouse gas emissions in the near term, no agreement could even be reached on which of several possible short-term measures to discuss first, with Brazil, Saudi Arabia, and the US objecting even to the word “prioritization.”

A tweet from The Wall Street Journal said, “At this point, it’s basically dead,” in reference to speed limits. Others were less certain — according to one close observer of the IMO, “I think it is too soon to definitively rule anything in or out. The discussion will continue.”

One reason for that is the growing pressure to act. The IMO found itself in the unusual position of having protesters outside its headquarters. Overall, shipping is seen by some as having dragged its feet on environmental matters and now is on the defensive.

The idea of imposing speed restrictions has divided the maritime industry, with container carriers staunchly opposed. Even speeds slower than those already implemented would likely require container lines to invest in additional old-technology tonnage to maintain weekly schedules, drawing down limited capital that might be unavailable for more efficient ships later on. No container carriers signed on to an April 30 letter to the IMO calling for speed restrictions; the letter had more than 110 signatures from shipowners, many of them non-operating owners who would bear little of the cost of speed restrictions as compared to charterers.

A recent analysis from SeaIntelligence Consulting found that since 2012, average transit times “have gotten progressively longer” in Asia-Europe and trans-Pacific trades, apart from the Asia-Mediterranean routes, which have seen transit times shorten slightly in recent years. According to figures cited by the Financial Times, large container ship speeds dropped 22 percent to an average speed of 16 kts between 2007 and 2015.

Guy Platten, secretary general of the International Chamber of Shipping (ICS), said in a statement following the conclusion of the MEPC meeting, "Although no final decisions have been taken it was clear that the majority of IMO Member States, including major economies such as China, India, the United States and many South American nations, had little appetite at present for initiatives such as mandatory speed limits, expressing concern that these would reduce the efficiency of maritime transport, in effect increasing the distance between economies and their markets, while acting as a disincentive to the take-up of new CO2 reduction technologies."

Short-term measures needed to peak greenhouse gas emissions from shipping as soon as possible can only come from operational changes, such as speed reductions, which tells many the idea will not go away soon, despite an overall drop in vessel speeds. Over the past decade, slower vessel speeds have contributed to lowering fuel consumption and CO2 emissions by 18 percent, according to the ship broker Clarksons. But in ensuring that the near-term commitment of the IMO to peak greenhouse gas emissions is achieved, mandatory speed restrictions are still seen as necessary.

Speed restrictions are “the only way to comply with the environmental regulations imposed on us in the future,” Philippe Louis-Dreyfus, chairman of Louis-Dreyfus Armateurs, a shipping company involved commodities transportation, port logistics, and specialized shipping, told JOC.com.

“An action on speed is the only way forward under the circumstances to reduce polluting emissions of shipping. I don’t see any technical argument good enough and relevant enough to oppose that idea,” said Louis-Dreyfus, who is also the former president of the Baltic and International Maritime Council (BIMCO) and the European Shipowners Association.

“I am quite confident that something of the kind will come out in a not-too-far future,” he added.

“On the one hand, as mentioned, it is, to my eyes, the only way to efficiently deal quickly with emissions, and on the other hand, it is a political message to the public.”

Despite the limited progress and fears from proponents it could be removed from the agenda entirely, speed reduction remains on the table, the delegate said. Speed reduction and speed optimization was included on the agenda for the next greenhouse gas working group of the IMO in November.

“Nothing has been taken off the table. It will be the task of the next session to prioritize the measures that will have the highest impact on shipping emissions,” said Faig Abbasov, shipping policy manager at the advocacy group Transport & Environment.

The IMO greenhouse gas working group published a timetable showing that short-term CO2 cuts could still be achieved before 2023, as required in the 2018 IMO Initial Strategy. However, according to the delegate, inaction last week “has put this deadline at risk.”

While the byzantine politics of the IMO are complex and difficult to decipher, a path forward on mandatory shipping restrictions was proposed in the runup to the IMO meeting by the delegation of France, the torchbearer for the 2016 Paris Climate agreement where countries agreed to limit global warming to 1.5 degrees Celsius above pre-industrial levels. The 2018 IMO Initial Strategy in reducing CO2 emissions is meant to commit the maritime industry to achieving that goal.

France suggested a slow-steaming regime that omitted container ships, given how much they have already slowed down, but focused on bulk and dry bulk ships. In noting that the necessary short-term measures under the 2018 strategy need to be in effect by 2023 and cover the existing fleet, France said speed limits are “the only measure that requires little or no technical adaptation of the ships, and several existing technological and legal means enable authorities to enforce [a] ship’s continuous or average speed.”

Louis-Dreyfus said, “I am quite happy if container shipping is excluded. Addressing tramp shipping — dry and wet — which accounts for 60 to 65 percent of the world fleet, is good enough for me at this stage.”