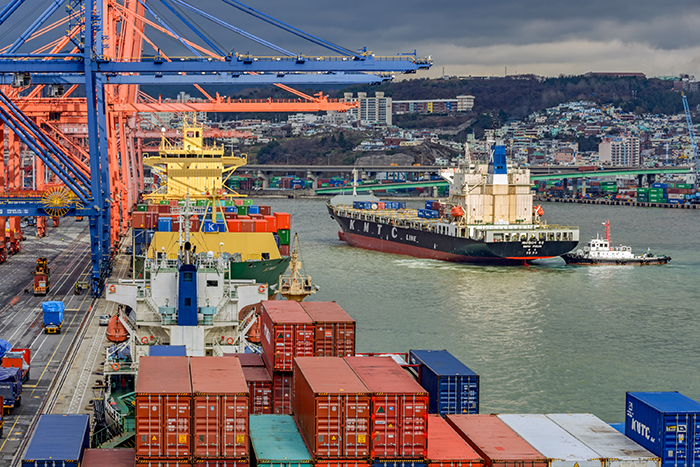 Schedule reliability for niche intra-Asia carriers ranged from 75 percent to 90 percent in July, according to data from Sea-Intelligence. Photo credit: Igor Grochev/Shutterstock.com.

Bad weather, port congestion, strikes, and shifting service demand are major disruptors of carrier service schedules in Asia, where typhoons, fog, and lackluster infrastructure are common. Those factors, along with the cascading of larger vessels from other trades, are making it difficult for smaller short-sea and feeder carriers to turn a profit.

Jeremy Nixon, chief executive officer of Ocean Network Express (ONE) said the Port of Shanghai — the largest container gateway in the world — was closed for a total of 28 days between April and August last year due to frequent typhoons, while Ningbo was also affected. He said climate change is making bad weather events more frequent, while the routing of storms appears to have moved further north to affect eastern and northern China, Korea, and Japan.

Fog and strong winds in Shanghai last year led intra-Asian carrier Gold Star Line to drop the port from some services to maintain reliability and sailing schedules. Cargo was picked up later and transshipped elsewhere by a dedicated vessel.

While the disruption is felt by carriers who struggle to recover finely tuned schedules, shippers bear the brunt of the delays as just-in-time delivery becomes spoiled cargo or canceled orders.

“Intra-Asia operators typically run services linking southeast Asia ports to north Asia including China, Korea, Taiwan, and Japan. As we know, the area is prone to bad weather with its fair share of tropical storms and typhoons; that causes delays and forces carriers to omit ports to recover their schedules,” said the head of one Southeast Asia-based feeder operator.

These carriers are putting the squeeze on regional and feeder operators by deploying bigger ships and launching new services even as trade volumes continue to grow, carrier executives told JOC.com. The vast majority of newly built vessels coming online are deployed in the major east-west trades, but these moves have a trickle-down effect on smaller trades. Also referred to as “cascading,” when new vessels are introduced on any trade, they displace older ships, which are then deployed in other lanes. This displaces the current fleet in those trades, and so on, until they reach the smaller north-south and intra-regional trades.

“To be honest, we don't know how intra-Asia and feeder operators can make money,” said the head of one intra-Asia carrier. “If you have a big enough network, with some sectors making money while some are not, then hopefully you can still stay above water. But when more and bigger tonnage continues to be deployed in the region, it will be very tough for everyone — intra-Asia operators and common feeders alike.”

In addition to cascading vessels from other trades, global carriers are launching new loops with intra-Asia components. Hapag-Lloyd, Maersk, ONE, and CMA CGM subsidiary ANL, for example, will commence two new services linking Singapore, Malaysia, Thailand, and Australia in October. The carriers will deploy seven 8,500-TEU and six 5,700-TEU ships, respectively, on the South East Asia Australia Loop 2 and 3 services.

APL is also launching its Philippines Taiwan Express (PTX) service from Sept. 19, offering transshipment in Kaohsiung for other destinations including Japan and Vietnam.

He said ACL is cooperating with partners on Sihanoukville, Semarang, Surabaya and Philippines services. “By pooling volumes, feeders can attain economies of scale and better cost management,” Lim told JOC.com.

Pointing to the impact of bad weather and other disruptions on schedule reliability, Bruce Abbe, strategic advisor for trade and transportation at the Minnesota-based trade association the Specialty Soya and Grains Alliance, said some United States soy and grain exporters suffered delays of up to 30 days to cargo shipments in March and April. This occurred as carriers rejigged services in response to volume surges caused by shippers looking to get cargo in or out of China and the United States ahead of escalating import tariffs, increasing demand for transshipment between Asian countries.

“The major issue this year has been due to beat-the-tariffs​ surge congestion, which seems to have impacted transshipment delivery times overseas as well as domestic rail service here,” said Abbe, who is past president and chief executive of the Midwest Shippers Association. “After the imposition of China tariffs, there has been a stronger focus on diversifying into other markets, but it’s not exactly something that can be done immediately.”

US soybean and grain producers in particular have been further developing the “steady and growing Asian market, including moving into other countries such as Bangladesh, Cambodia, and Myanmar,” he said. “Transshipments in Asia may be a more prevalent need in some of these developing trade lanes.”

Caroline Becquart, senior vice president and head of Asia network and vessel sharing agreements at Mediterranean Shipping Co. (MSC), said the prolonged US-China trade war is reshaping the flow of goods in Asia. Citing figures from China’s General Administration of Customs, Becquart said Southeast Asian countries saw imports of Chinese furniture imports surge 30 percent year over year to $1 billion in the first five months of 2019 after the US levied a 10 percent tariff on Chinese exports a year ago. US imports of Chinese furniture, meanwhile, dropped 11 percent to $3.7 billion during the same period.

Conversely, Vietnam, Taiwan, Thailand, and Malaysia saw containerized exports to the US surge 15 to 21 percent year over year through July 2019, according to data from Denmark-based analyst Sea-Intelligence Maritime Consulting.

Nelson Sequeira, director of regional specialist X-Press Feeders, said this reflected the transfer of manufacturing out of China to other Asian countries as firms looked to avoid paying US tariffs.

​The shift to these other markets has highlighted issues with service and schedule reliability among mainline and feeder carriers operating intra-Asian services, as well as a lack of accurate data with which to assess carrier performance.

According to data from Sea-Intelligence, niche carriers serving the intra-Asia trade, such as Bengal Tiger Line, KMTC, Samudera, and Regional Container Line, had schedule reliability of between 75 and 90 percent in July. By comparison, on-time performance among the top 10 global carriers, including Maersk Line, MSC, CMA CGM, Hapag-Lloyd, Cosco Shipping, and ONE, was approximately 80 to 90 percent during the same month. It is important to note, however, that the latter figure covers all deep-sea trades with an Asia segment, including Asia-Europe, trans-Pacific, Middle East and India, and Oceania services.

With a three-day transit for a direct service between Hong Kong and Singapore and shorter transits between ports in southeast Asia including Singapore, Malaysia, Thailand, and Vietnam, regional and feeder operators can be disproportionately impacted by delays.

“Add to that, many — if not most — feeder services operate more in a tramp-like manner rather than liner, often tied to match certain mother vessels, and you can't really measure intra-regional reliability. Making things even more complicated is the large number of operators in Asia, with many of them not even publishing schedules,” he said.

All of this adds up to a market where shippers have a hard time choosing between cheaper, dedicated intra-Asia operators and intra-Asia service provided by mainline carriers on services that sail to other regions outside of Asia, Murphy said.

“In terms of hub and spoke connectivity, feeders have the best frequency and reliability,” Sequeira told JOC.com. “Shippers using foreign feeders and short-sea services will have better schedule reliability because they have multiple sailings, while mainline operators usually offer one sailing a week and will likely hold cargo for their own sailings.”

Sequeira also noted that some regional subsidies of mainline operators do not cover the entire Asia region. “Maersk has been covering the intra-Asia trade via its MCC-Sealand subsidiary but limits its participation between north Asia and southeast Asia and anything east of the Indian sub-continent. But MCC is not involved in the India subcontinent trade,” he said.