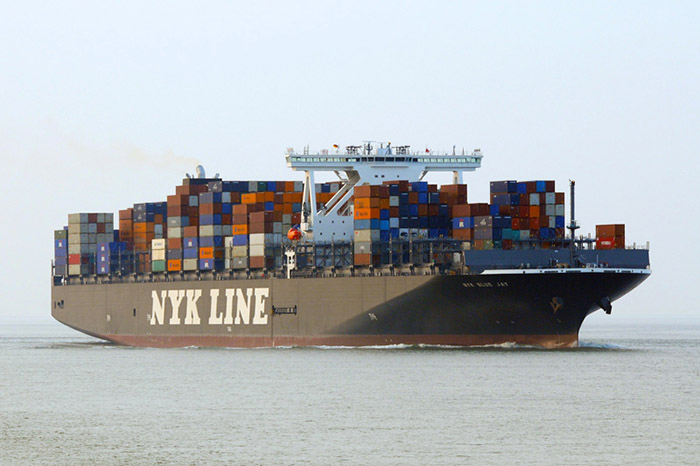 All three Japanese carriers are members of THE Alliance, which begins operation on April 1, 2017, and the liners said was a factor in their decision to merge.

The wave of consolidation sweeping through the liner industry broke over the Japanese ocean carriers this morning as NYK Line, “K” Line, and MOL announced they are merging their container shipping businesses.

In a joint statement, Kawasaki Kisen Kaisha, Mitsui O.S.K. Lines, and Nippon Yusen Kabushiki Kaisha said they had signed a contract agreeing on the establishment of a joint venture company to integrate their container shipping business and the terminal operating segment, excluding Japan.

The joint venture company will be established by July 1, 2017, with the planned starting date for the new operation April 1, 2018.

The announcement was made the same day that Japan's three biggest carriers recorded a collective half-year operating loss of $484 million, led by "K" Line and highlighting the dire predicament faced by the container lines. Merging their container businesses would generate scale and operational efficiency benefits allowing the lines to save $1 billion a year.

“By strengthening the global organization and enhancing the liner network, we will be able to provide higher quality services and unlock new value in order to exceed our clients’ expectations,” the statement said.

“The three companies have been cooperating in products and services through vessel-sharing agreements and the alliance scheme. Further, they are similar in size, have common corporate cultures, and believe the JV (joint venture) can leverage the strength of each individual company to create stronger competitor overall.”

Container shipping has struggled in recent years owing to a decline in the container growth rate and the rapid influx of newly built vessels, with low oil-prices, sluggish cargo demand, and oversupply of trade capacity, meaning almost all container shipping companies were making a loss, the carriers said.

“The three Japanese companies have made efforts to cut cost and restructure their business, but there are limits to what can be accomplished individually,” the statement said. “Also, in order to keep a membership of a global alliance continuously, it would be necessary to have above a certain business scale level.

“Under such circumstances, we have decided to integrate our container shipping business so that we can continue to deliver stably high quality and customer-focused products to the marketplace. Furthermore, the decision to cooperate in the east-west trades made in May 2016 by the creation of THE Alliance was also a factor.”

All three Japanese carriers are members of THE Alliance that begins operation on April 1, 2017. However, with the start of the new merged entity planned for April 1, 2018, it is not clear whether there will be any impact to alliance services.

The joint container fleet of 256 vessels will have a capacity of 1.4 million 20-foot-equivlent units, excluding the order book of 360,000 TEUs, making it the sixth-largest liner in the world with a 7 percent global market share. A total of $2.9 billion will be invested in the new operation, which includes the fleet and terminals, and the shareholding structure will be NYK 38 percent, and MOL and “K” Line 31 percent each.

The merger comes as the container shipping industry undergoes a radical restructuring that this year has seen three huge merger and acquisitions deals — CMA CGM acquired NOL and its liner unit APL, Cosco merged with China Shipping, and Hapag-Lloyd merged with UASC — and one liner bankruptcy with the collapse of Hanjin Shipping.

An ongoing period of weak demand and soaring capacity levels have seen freight rates hitting record lows this year, stripping profitability out of carriers. Even though rates have been trending upward since mid-March, Drewry is predicting collective industry losses will top $5 billion this year.

The weak demand and surplus capacity is expected to improve in the next couple of years, but freight rates will remain under pressure until supply-demand is more in sync, which is unlikely to be before 2018 and 2019. It is this expectation of protracted low rates, little profitability and no sign of a recovery that is rattling investor confidence in the liner shipping industry and leading to the unprecedented levels of consolidation.

Permalink Submitted by ferrullig@minds... on Oct 31, 2016 1:05PM EDT
Not much choice. Independently they were minor players at 11,12 and 15 in the world. Combined they are right behind the "new" Hapag Lloyd at 6th in the world. The synergies and the scale should give them a cost base that is relatively competitive, but the transition will be very difficult with three very distinct cultures. The timing reflects what they think of it. Getting closer to only ten who have 90% of the capacity and cargo.

Wonder what the new entity