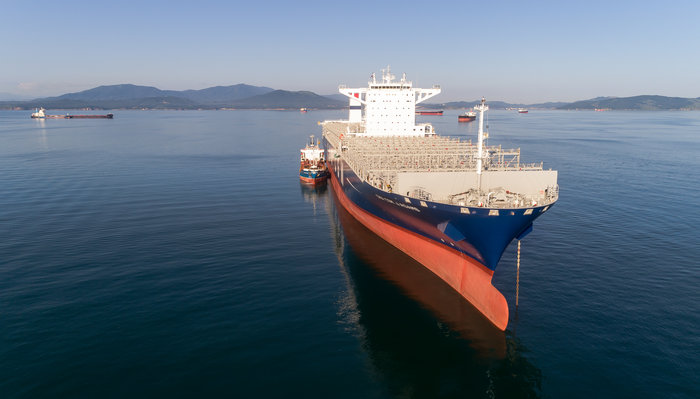 Fresh tonnage could upset the still-fragile balance of supply and demand in global container shipping.

The orders threaten the industry’s fragile return to profitability, warns Drewry Shipping Consultants, which currently expects $5 billion in industry profits for 2017, while the make-up of the order book of Cosco and Evergreen Line leaves them little choice but to pursue cargo to keep ships employed, according to SeaIntel.

The CMA CGM orders would be the first order of ships between 10,000 and 25,000 TEU in 2017, according to IHS Markit, but 20 ships of that size had been delivered as of June, and such ships are entering the Asia-Europe trade at a pace of once per week. There 58 ships in the 10,000 to 25,000 TEU range under construction this year, with that figure to jump to 73 next year, IHS Markit data show. The uptick follows the lowest annual container ship fleet capacity growth ever recorded as ship scrapping spiked, making 2016 the first year that more vessels left service than entered it.

“Even if a positive view of demand is adopted assuming stronger growth on the head haul east-west trades, it is exceedingly unlikely that this is sufficient to match the capacity injection by Ocean Alliance, especially if the new CMA CGM order of nine 22,000-TEU vessels is confirmed,” said SeaIntel CEO Alan Murphy. The global container trade will expand just short of 4 percent this year, according to IHS Markit forecasts.

The French carrier is said to be close to signing a deal for the 22,000-TEU container ships, overtaking the current largest vessel afloat, the 21,413-TEU OOCL Hong Kong, which is to be joined by five sister ships still on order. CMA CGM was not available for comment on the order said to be valued at $1.4 billion, either with Korea’s Hyundai Heavy Industries or China’s Shanghai Waigaoqiao Shipbuilding.

“Despite a long period of sobriety it appears that carriers’ addiction to big ships still remains in the blood stream,” Drewry said. “Given the chronic — and ongoing — overcapacity problem that has blighted carriers’ profits in recent years what could have tempted CMA CGM to risk undermining the still very fragile recovery?”

CMA CGM faces being demoted to fourth in the ranking of the world’s container lines following the merger of China’s Cosco and Hong Kong-based OOCL, while it also lacks “top-end” ships compared with its closest rivals.

“From an industry perspective there is simply no good reason to add these ships to already overcrowded oceans,” the London-based consultancy said.

Carriers make decisions and investments in their own interest with the potential impact on the wider industry a secondary consideration, “if at all.”

With order-hungry shipyards probably offering sizeable discounts, it is easy to see how the French carrier was convinced “to make the splash.”

“In some ways this deal is all about the company playing catch-up,” Drewry said.

CMA CGM’s largest ships are six units of between 17,772 and 17,859 TEU, while the biggest vessels on order are three 20,600-TEU units originally due to be delivered this year but deferred to 2018, compared with top-ranked Maersk Line, which has 31 ships above 18,000 TEU either operating or on order.

Adding nine 22,000-TEU ships would almost double CMA CGM’s current order book to around 423,000 TEU and close the gap with its nearest competitors, but would not reclaim its ranking as the world’s third-largest ocean carrier.

The industry’s current order book is already close to 3 million TEU due by the end of 2020 to add to the current fleet that recently topped 20 million TEU.

The bulk of deliveries are due before 2019 and are “heavily skewed” at the top end of the range with 18,000-plus-TEU ships that have very limited deployment options, accounting for around 40 percent of the orders. Seventeen vessels amounting to 350,000 TEU are set to be delivered this year, and another 22 mega-ships are scheduled for delivery in 2018, according to IHS Markit data.

“Adding even more ships to the top-heavy pool will make the task of deployment and cascading harder than it already is,” Drewry cautioned.

While CMA CGM’s mega-ships will not significantly alter the supply-demand dynamics, it will become more of a problem for the industry if “herd mentality kicks in” and other carriers follow with orders for similar-sized ships, Drewry said.

CMA CGM’s unconfirmed order suggests that for some carriers at least “growing market share remains their driving principle, when the recent trend has been to pay off debt.”

At the same time, the constitution of the fleets of Cosco and Evergreen Line leave them little choice but to pursue market share, said SeaIntel.

This is because the order books of Cosco and Evergreen range from between 40 to more than 60 percent, respectively, of their chartered capacity, according to SeaIntel.

This means that if demand growth falters these, two carriers cannot match their supply and demand through the absorption of new tonnage on the order book by returning tonnage on charter to ship owners, which would create a commercial imperative for the carriers to chase cargo at any price in order to keep their vessels filled.

Evergreen and Cosco could sell assets to keep their excess supply in check, but SeaIntel said this is unlikely because to have any impact on the capacity overhang they would have to sell their largest ships.

The merged fleets of Japan’s top three carriers in the ONE joint venture would also struggle to fill its ships given organic market growth trends, as their combined order book as a share of their charter fleet comes to 30 percent.