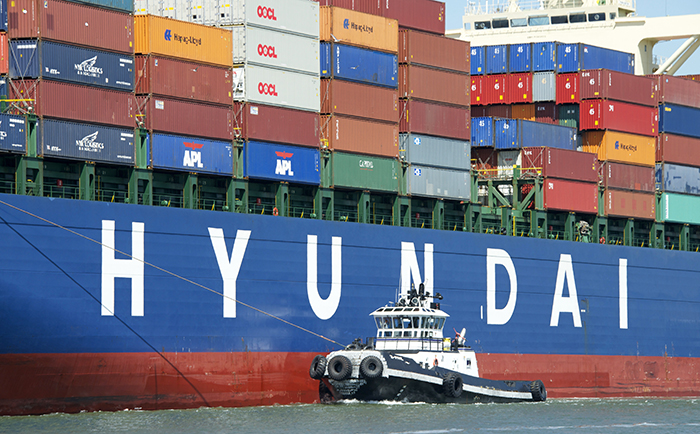 HMM reported a full-year operating loss of $74 million in 2018, a 42 percent improvement over 2017. Photo credit: Shutterstock.com.

Facing pressure from its top investor and uncertainty on its future in a major alliance, the new leader of HMM, which hasn’t turned a quarterly profit since 2012, is doubling down on providing a higher level of service to its customers.

The Seoul-based container carrier on Wednesday named Jae-hoon Bae, who has previously served as president of electronic producer LG Semicon Americas Inc., vice president of LG Electronics, and most recently CEO of Pantos Logistics, president and CEO. But it’s still unclear whether HMM, under Bae’s leadership, will take a route similar to Hapag-Lloyd in focusing on core container services, follow CMA CGM and Maersk in building supply chain management capabilities, or forge an entirely new path.

The company said in a statement its new CEO would “focus on a customer’s view on handling HMM’s current issues in order to lead managerial innovation and strengthen its sales competitiveness.”

Bae replaces Chang Keun Yoo, who announced his resignation earlier this year amid speculation that his struggle to return the carrier to profitability and pressure from shareholders forced him to step down. Yoo has been president and CEO of HMM since 2013.

State-owned Korea Development Bank (KDB), HMM’s primary shareholder and lender, late last year hardened its attitude towards the carrier, threatening to fire non-performing staff after 14 consecutive loss-making quarters. The company continues to operate at a loss but has been slowly gaining ground by reducing debt levels while increasing revenue. The $74 million full-year operating loss reported in 2018 was a 42 percent improvement over 2017.

In the fourth quarter, HMM posted an earnings before interest and taxes (EBIT) loss of $59 million compared with a $111 million EBIT loss in the same quarter a year ago. According to SeaIntelligence Consulting, HMM’s 16.8 percent year-over-year revenue growth rate was the third highest among carriers during the quarter, better than that of both CMA CGM and Hapag-Lloyd. It was still a loss, however, and SeaIntelligence noted HMM has not had a profitable fourth quarter since 2012.

For any carrier to turn a profit, it must fill its vessels, something that in the age of mega-ships has become nearly impossible without cooperative vessel-sharing agreements. HMM’s three-year strategic partnership with the 2M Alliance of Maersk Line and Mediterranean Shipping Co. expires in April 2020, and the company said in December it had not ruled out a renewal but added that it was still reviewing the agreement and “nothing has been decided.”

HMM’s decision to place more focus on its customers takes the carrier in a similar direction to that being followed by their larger and more profitable peers as they try to improve their value proposition beyond pure ocean transport. The paths those carriers are following to get there, however, are clearly diverging, with one group expanding their service offerings into what would traditionally be considered 3PL services like warehousing and customs clearance and the other focusing solely on improving their core ocean transport offering and customer service quality.

The former group includes Maersk Group, which is taking more control over landside operations in an effort to transform itself into an integrated logistics provider; CMA CGM, which is adding CEVA Logistics to a portfolio that includes a significant container terminal footprint; MSC, which is investing in inland assets like warehouses, trucks, locomotives, and barges under its Medlog brand; and Chinese state-run carrier COSCO Shipping. One of the primary enablers of this end-to-end approach to container transportation is digitization, which Maersk CEO Soren Skou said has provided greater supply chain visibility, enabling logistics providers to take a more integrated approach.

In addition to HMM, the second group includes carriers like Hapag-Lloyd, which recently raised its earnings projections for 2019 on the back of a new customer-focused, value-adding strategy and an improving market, and Japan's Ocean Network Express (ONE), which has said on numerous occasions it would eschew the integrated serviec model in favor of a focus on traditional ocean transport and customer service.

Whether Bae will be able to return HMM to profitability remains to be seen, but the carrier didn’t offer much hope considering its gloomy 2019 outlook.

“Uncertainty over the cargo volumes in 2019 will continue due to the concerns of a global economic slowdown, Brexit, and the US-China trade conflict,” HMM said in a statement. “The liners’ burden of high fuel costs will increase due to the US sanctions against Iran, OPEC agreeing to cut oil production, and increase in demand for low sulfur fuel oil in preparation for IMO 2020.”

HMM in late 2018 secured financial liquidity through a bond issuance of $890 million and ordered 20 mega-ships for delivery from the second quarter of 2020 that it maintains it will be able to fill.

After the demise of Hanjin Shipping, HMM renegotiated long-term charter agreements and secured banks’ support, resulting in KDB becoming the carrier’s single largest shareholder. HMM and SM Line are now the only two South Korean lines offering long-haul routes, although SM Line operates just two long-haul services, both of which are on the trans-Pacific trade.

However, SM Line CEO Kim Chil-Bong told JOC.com in November there were no plans to merge the carrier with HMM, nor was there a clear path to create a larger national carrier, as has been discussed in government circles.

“There is no will or reason to merge the two companies. SM Line will continue to build its own business models, and we will do our part to survive in the market independently,” Kim said during an interview at the company’s headquarters in Seoul.