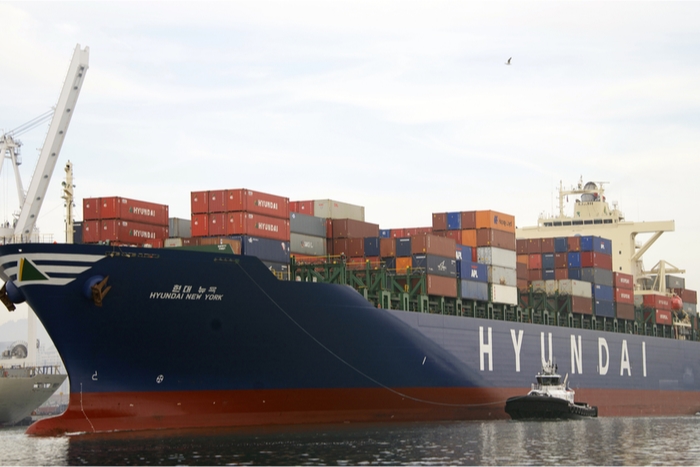 Slowing economies, weakening global trade, and the impact of the coronavirus on demand in the first half are weighing on HMM that, along with its new THE Alliance partners, will have 12 additional mega-ships to fill on the Asia-Europe trade. Photo credit: Shutterstock.com.

HMM is facing an uncertain 2020, with the expected benefits of membership in THE Alliance and the delivery of a dozen mega-ships tempered by macroeconomic and geopolitical headwinds.

In its 2019 financial results, the carrier highlighted concerns over the spreading impact of the coronavirus, a potential global economic downturn, and ongoing United States-China trade issues, warning in its outlook for this year they were “weakening the prospects for rises in trade volume.”

Forwarders are predicting that delays in resuming China’s factory production and inland transportation supply chains due to the coronavirus will push the return of normal post-Lunar New Year trans-Pacific cargo flows to late February or early March. A similar delay in shipments to Europe is expected, along with a vessel capacity crunch in the rush for space at the end of February once factories resume full production.

Despite a weak container shipping market in the fourth quarter of 2019, HMM’s full-year revenue increased 5.6 percent to $4.7 billion, and operating losses for the year improved from $479 million to $261 million. Average spot rates declined 9 percent from October through December, according to the Shanghai Shipping Exchange’s Shanghai Containerized Freight Index (SCFI), tracked weekly at the JOC Shipping & Logistics Pricing Hub. HMM did not give volume figures in its 2019 earnings statement.

The outlook for 2020 remains uncertain, with the first-half demand affected by the coronavirus, and the second-half supply boosted by scrubber-fitted ships returning to service and new ship capacity being delivered. With 12 ships of 23,000 TEU coming online and needing to be filled during 2020, this is not good news for HMM.

Nariman Behravesh, chief economist at IHS Markit, parent company of JOC.com, said in a market update this week that the sheer scale of China’s economy means the coronavirus epidemic could have a larger negative effect on the global economy than the SARS outbreak in 2003.

“On the other hand, if confinement measures begin to be lifted earlier in February, the impact on global GDP will be more limited, resulting in a 0.1 percent reduction in global GDP growth in 2020, with a correspondingly smaller rebound,” he said. “This is our current base case.”

The slowing economic growth in 2020 will be accompanied by an increase in container shipping capacity. Alphaliner noted that the active fleet would grow over 5 percent in the second half of the year, driven by new ship deliveries and the return of the retrofitted ships at a rate of 50 per month in the first half.

This makes the inclusion of HMM vessels in THE Alliance’s 2020 service network from April all that more important. HMM will join THE Alliance as a full member in a 10-year agreement, teaming up with Hapag-Lloyd, Yang Ming Marine Transport, and Ocean Network Express (ONE) when the carrier exits its strategic partnership with the 2M Alliance of Maersk Line and Mediterranean Shipping Co.

HMM, after announcing its alliance membership in mid-2019, said the vessel-sharing agreement would give the carrier “the best opportunity to maximize its competitiveness” as the 12 mega-ships are delivered, and also improve its environmental performance.

According to Sea-Intelligence Maritime Consulting, bringing HMM into THE Alliance has allowed Hapag-Lloyd and ONE to avoid ordering mega-ships while still enjoying the slot-cost advantage of the HMM vessels on which they will be selling space.

Reports this week that Hapag-Lloyd was planning to order six 23,000 TEU vessels were dismissed by the carrier, which told JOC.com no decision has been taken yet on whether to order new ships, or whether they would be liquefied natural gas (LNG)-driven.