Hapag-Lloyd in profit as UASC merger ramps up volume

Hapag-Lloyd in profit as UASC merger ramps up volume 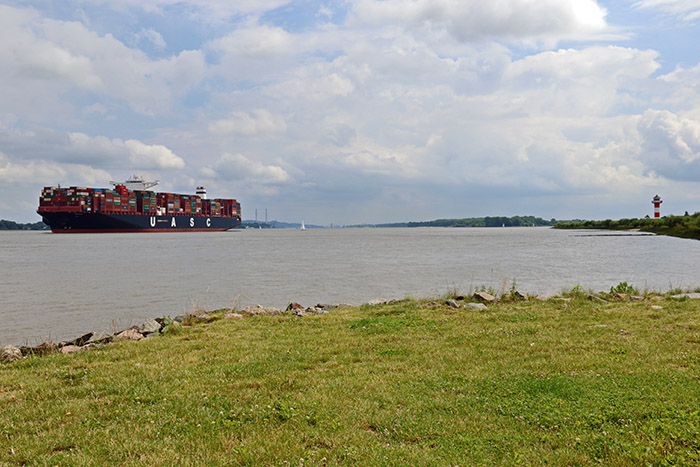 German carrier Hapag-Lloyd reported a solid set of results thanks in part to its merger with UASC. Photo credit: Shutterstock

Hapag-Lloyd container volume surged by 24.4 percent in the first nine months of the year, boosted by stronger demand and the integration of United Arab Shipping Company (UASC) that was acquired earlier this year.

The Hamburg-based carrier closed the third quarter of 2017 with a group net profit of $63.92 million (54.83 million euros) compared with $9.6 million in the same three months of last year and an improved operating result.

Hapag-Lloyd said in its earnings statement that the integration with UASC was almost completed and on schedule to be finalized by the end of the year.

“The good operating result that we have achieved after three quarters is not only due to the positive development of the global economy and the increasing global container transportation volume,” said Rolf Habben Jansen, CEO of Hapag-Lloyd.

“The quick and smooth integration of UASC into the Hapag-Lloyd Group has also played a crucial role. We have already been able to realize the first synergies resulting from the merger, which will help us to further solidify our position in the sector.”

Hapag-Lloyd handled 7 million TEU in the first nine months that generated revenue of $8.6 billion and an earnings before interest and taxes of $315 million.

The addition of UASC’s 58 vessels will create one of the industry’s youngest fleets, with an average ship age of just 7.2 years.

Hapag-Lloyd is targeting annual synergies of $435 million from the merger, of which a significant share should be realized through 2018, with the remainder achieved in the following year. The carrier also said it will not be necessary to make sizeable investments in new ships over the next few years.

In September, CMA CGM ordered nine 22,000 TEU vessels and Mediterranean Shipping Co. ordered 11 of the mega-ships. Earlier this month Cosco Shipping said 11 of the ships it was building in China were greater than 20,000 TEU.

Although these orders will only be delivered in two years, many vessels will be flooding online a lot earlier, which is set to pull down rates at least until the Chinese New Year peak in early 2018. Analysts have been highlighting the large amount of capacity coming online and the lack of canceled sailings on Asia-Europe.

In its latest newsletter, Alphaliner said it was unclear whether demand would be sufficient to support the high amount of capacity on offer and warned that the carriers’ failure to curb overall capacity growth could put pressure on rates in the coming weeks.

“Total capacity on the Asia-North Europe route will increase by 11 percent in the fourth quarter, with no service withdrawals and only a limited number of blanked sailings planned for the winter slack season,” Alphaliner noted.