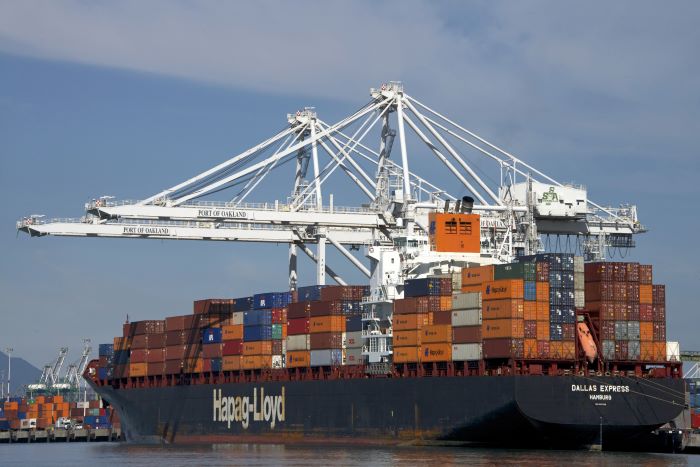 The new vessels ordered by Hapag-Lloyd will be fitted with a dual-fuel engine that will operate on LNG, but has sufficient tank capacity to run on conventional bunker fuels. Photo credit: Shutterstock.com.

Hapag-Lloyd Wednesday said it will spend about $1 billion to build six ultra-large container ships that will run on liquefied natural gas (LNG), a signal that carriers may not be content to wait for new, carbon-neutral fuels to be developed to add fleet capacity.

Volumes on the major east-west trades outstripped available vessel capacity for much of the second half of 2020, but unlike during previous demand booms, carriers have been reluctant to order new vessels that may not meet future emissions-reduction goals.

The new 23,500 TEU-plus vessels will be deployed on Hapag-Lloyd’s Europe–Far East routes as part of THE Alliance, the carrier said in a statement. The ships will be built by Daewoo Shipbuilding & Marine Engineering in South Korea and will be delivered between April and December 2023.

“With the investment in six ultra-large container vessels, we will not only be able to reduce slot costs and improve our competitiveness on the Europe–Far East trade, but also take a significant step forward in modernizing our fleet,” Hapag-Lloyd CEO Rolf Habben Jansen said in the statement. “Additionally, we will further reduce our environmental impact.”

The vessels will be fitted with a dual-fuel engine that will be powered primarily by LNG, but has sufficient tank capacity to run on conventional bunker fuels, the carrier said.

Hapag-Lloyd’s order for LNG-powered vessels comes as carriers and shippers are placing greater emphasis on decarbonization measures as the debate intensifies over how best to meet the International Maritime Organization’s 2050 deadline for reducing total emissions from international shipping by at least 50 percent compared with 2008 levels.

CMA CGM last week said it would increase its capacity on the Asia–Europe trade 10 percent in the first quarter of 2021, with the new capacity coming from the six remaining LNG-powered 23,000 TEU ships from a nine-vessel order. The first three mega-ships from the order were delivered over the past three months.

In mid-November, CMA CGM launched a new slate of more environmentally friendly offerings it calls ACT with CMA CGM+. According to the Marseille-based carrier, shippers and non-vessel-operating common carriers (NVOs) using ACT will be able to choose services in which their cargo is moved via its LNG and biofuel-powered vessels, allowing them to reduce emissions produced through shipping their goods by anywhere from 15 percent to 85 percent.

Maersk also offers a biofuel transport option, and most major carriers offer some type of carbon calculator, which allow shippers to track the emissions of given services and select accordingly.

Hapag-Lloyd’s order also comes as carriers are walking a fine line on strategic capacity planning. Without a clear understanding of the technology that will be used to propel ships over the next decade-plus, container lines are pulling back on ordering new ships at a time when vessel space is reportedly maxed out in the major east-west trades.

That makes it less likely that overcapacity, which plagued the industry for the better part of the last decade, will return to the sector in coming years given that research into viable new fuel types is still in the early stages.

How to Improve OTIF: 15 Tips for On Time and In Full Delivery
END_OF_DOCUMENT_TOKEN_TO_BE_REPLACED