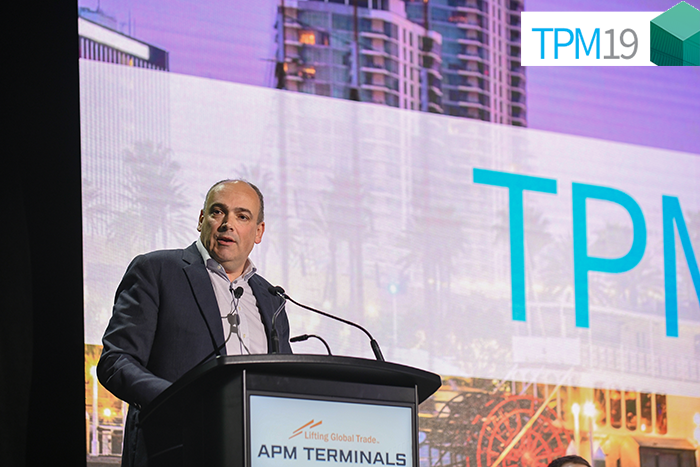 LONG BEACH, California — Responding to shipper complaints that carrier pricing of low-sulfur fuel costs kicking in later this year aren’t transparent enough, the CEO of Hapag-Lloyd, Rolf Habben Jansen, said Tuesday the formula is quite simple: it's the cost of the fuel burned in the round-trip voyage divided by the number of TEU carried.

In the trans-Pacific, the factors included in an equitable bunker adjustment factor (BAF) for the higher-priced low-sulfur fuel required starting Jan. 1, 2020, would include the number of days in transit between Asia and the US, the amount of fuel consumed, and the cost per metric ton of the fuel, Habben Jansen told the JOC’s TPM 2019 conference in Long Beach.

Cost sharing not an option

As for the possibility of the carrier and its customers sharing the additional cost, which he estimates will be about $100 per TEU, Habben Jansen was equally direct. “The additional cost is so substantial that it will not be an option to not pass on that cost,” he said.

This view was reinforced Wednesday by Lars Jensen, CEO and partner at SeaIntellingence Consulting. “This is not a give and take. The bill will be paid by the BCO [beneficial cargo owner]. There is no one else to pay it,” he said. Jensen estimates the additional costs that the liner industry will incur because of the International Maritime Organization (IMO) requirement will be $10-15 billion a year. To put that figure in perspective, the entire industry recorded a total profit of $8 billion over the past seven years, he said.

There has also been a good deal of confusion over the path that the global liner companies will take to comply with the IMO mandate. Under the rule, carriers can burn low-sulfur fuel with a sulfur content of 0.5 percent, or they can install scrubbers and continue to run their vessels on today’s heavy bunker fuel with a sulfur content of 3.5 percent. A small percentage of the fleet in certain trade lanes will opt for liquified natural gas (LNG), which is compliant and less costly than low-sulfur bunker fuel.

Habben Jansen said that by 2020, it is estimated only 200 of the 5,000 container ships operating worldwide will have scrubbers. The remaining 96-97 percent of the global liner fleet will burn low-sulfur fuel or LNG, he said.

While each carrier is expected to handle pricing in its own way, Habben Jansen said he expects Hapag-Lloyd will quote a “floating” BAF that changes every three months. Clarity and transparency will be ensured because the underlying data that the carrier will use in formulating its BAF are publicly available, Habben Jansen said.

Maersk Line, meanwhile, plans to implement a BAF that adjusts even more frequently. In an interview with JOC.com, Maersk CEO Soren Skou said the carrier is asking shippers to agree to contractual language that will allow it to adjust the floating mechanism for changes in fuel prices relatively quickly. “The way our new fuel surcharge is constructed, it adjusts faster,” he said. “The old one had a three-month period during which the price would go up and down.”

Noting that Maersk vessels use about 0.9 tons of fuel per container carried, Skou said if the price of fuel goes up by $300 per ton, the carrier incurs a cost increase of $270 per container. “That can often be 10-15 percent of the freight and [would] cause an enormous fluctuation in an industry that doesn’t make any money,” Skou said.

Some BCOs that do not accept the carriers’ BAF formulas have developed their own. “The real challenge is understanding the underlying data. We have customer BAFs because of a lack of clarity of the old formulas,” said Matt Muenster, senior manager, applied knowledge, at Breakthrough Fuel.

The IMO’s low-sulfur fuel mandate is expected to have a disruptive effect on the global shipping market because it applies to the maritime trade of all nations, it takes effect everywhere on Jan. 1, the enforcement regime in some countries has not been clearly defined, and there could be shortages of supply in some markets, said Stephen Jew, associate director, oil markets, midstream, downstream, and chemical, at IHS Markit.

Habben Jansen said he anticipates there will be sufficient supply come Jan. 1 in high-volume trade lanes such as the trans-Pacific but that the same might not be true for the “lesser” north-south trades.

Another complicating factor is the lengthy, complex process involved in the transition from heavy bunker fuel to low-sulfur fuel and the possibility of engine damage if the switchover is not handled professionally. In order to account for this and have enough time for proper testing, Hapag-Lloyd will begin the transition for its vessels in the fourth quarter of this year, Habben Jansen said.