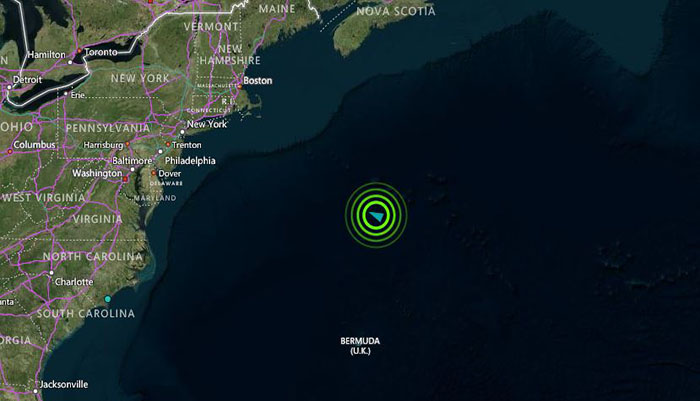 The Hanjin Switzerland, circled in green rings, makes it way to the Port of New York and New Jersey in this screen capture from AISLive.

NEWARK, New Jersey — The Hanjin Switzerland, the second Hanjin Shipping vessel to stop at the Port of New York and New Jersey since the world’s seventh-largest container line filed for bankruptcy, will dock Wednesday at the Global Container Terminal in Bayonne.

By docking at that terminal, rather than the scheduled point of arrival at Maher Terminals, the 9,030-twenty-foot-equivalent-unit vessel will avoid any possible difficulty passing under the Bayonne Bridge, the Port Authority of New York and New Jersey said Tuesday.

The vessel’s cargo will be loaded onto a barge and taken to Maher Terminals and sent onward to its final destination, the port authority said.

The ship’s arrival in New York is the latest sign that a slowly growing portion of the troubled liner’s fleet is finally reaching its destination, releasing cargo that has been locked up since the ocean carrier filed for bankruptcy in a South Korean court on Aug. 31.

The arrival comes just over two two weeks after the departure of the 7,500-TEU Hanjin Miami, which docked at Maher Terminals on Sept. 22. Prior to its arrival, the vessel sat a few miles out of the port in Ambrose Anchorage for two weeks, waiting for the company to pay the terminal and other charges for unloading the cargo.

The Miami Hanjin departed carrying empty containers from other members of the CYKHE Alliance so that it could fit under the Bayonne Bridge without worry.

Ships docking at Global Container Terminal do not need to pass under the Bayonne Bridge. By stopping there the significantly larger Hanjin Switzerland avoids any problem that might arise if it is too high in the water on its way out of the port.

Announcing the ship’s pending arrival, the Port Authority of New York and New Jersey said “there will not be export containers loaded back onto the Hanjin Switzerland. All bookings have been cancelled.”

Also scheduled to stop the Port of New York and New Jersey is the Hanjin Chongqing, a 6,655-TEU vessel, which is expected to arrive on Oct. 27, also at Global Container Terminal.

Two other ships scheduled to stop at the port, Hanjin Baltimore and Hanjin Bremerhaven, are under arrest, and it is not clear when they will be released and allowed to make their way to the United States from Panamanian waters.