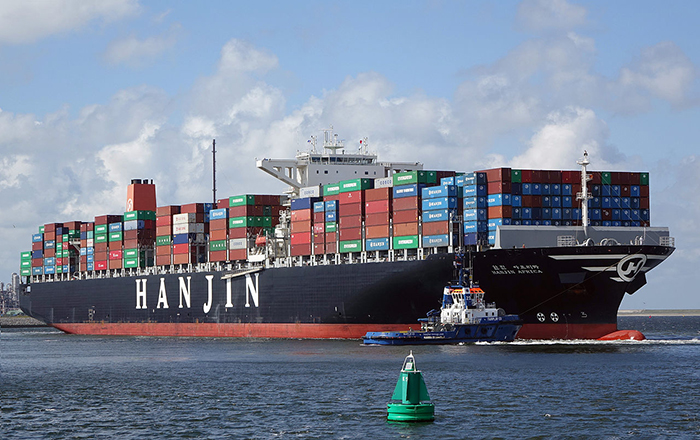 More than two-thirds of failed Hanjin Shipping’s fleet is still looking for employment, according to Drewry Shipping Consultants.

The lag in finding homes for former Hanjin ships could help explain the strength of trans-Pacific and Asia-Europe spot market rates through the fourth quarter and into 2017, however, with the pre-Lunar New Year rush now over, a clearer picture of global container shipping supply and demand should emerge.

“It clearly takes more than a few months to strip the carcass of a dead shipping line, and we expect many of the former Hanjin ships to occupy the idle fleet for some time to come,” Drewry said.

Maersk Line has led in picking the bones, chartering 11 of the 98 former Hanjin ships, with those 11 having a total capacity of 77,000 twenty-foot-equivalent units. The largest are a couple of 13,092-TEU vessels — the four-year-old Hanjin Africa and Hanjin Harmony — that were sold at auction to unnamed buyers for around $131 million each in December.

Maersk is deploying the two ships — renamed Maersk Emerald and Maersk Ensenada — in the 2M alliance with Mediterranean Shipping Co. on the Asia-Europe network.

The other leading operators of former Hanjin vessels are Yang Ming Line, Pacific International Lines, and CMA CGM, but they are far behind Maersk, with each of their fleets acquired from Hanjin below 10,000 TEUs.

Non-operating owners that chartered ships to Hanjin, which collapsed at the end of August, including Danaos, Seapsan, and Kmarin, have managed to find replacement lessors for 30 ships so far, probably at considerably lower daily rates than the South Korean line was paying.

Around 63 former Hanjin ships with close to 460,000 TEUs of capacity are still idle, including the Hanjin Europe, one of the trio of 13,092-TEU vessels that were sold by Germany’s Peter Döhle Schiffahrts-KG for $131 million each in December.

Another six sister ships with “similarly opaque” ownership will be auctioned off next month, boosting the $460 million raised so far in auctions of Hanjin-owned vessels.

At least eight more Hanjin-owned ships should be trading again fairly quickly following a recent spate of sales. Korea Marine Transport Company paid $5.3 million apiece in December for four 4,274-TEUs units, and Korea’s Samra Midas acquired five 6,655-TEU ships in a $23 million deal that are to be deployed on the trans-Pacific trade.

Seaspan Corporation has paid $21 million for four 4,275-TEU units previously owned by Hanjin that are yet to be chartered.

Drewry estimates there remain up to as much as 150,000 TEUs of Hanjin-owned ships looking for buyers, and given the current glut of capacity and limited demand growth it is questionable how big a market they can attract even at basement prices. “The biggest and youngest ships are likely to have the biggest pull.”

How to Improve OTIF: 15 Tips for On Time and In Full Delivery
END_OF_DOCUMENT_TOKEN_TO_BE_REPLACED