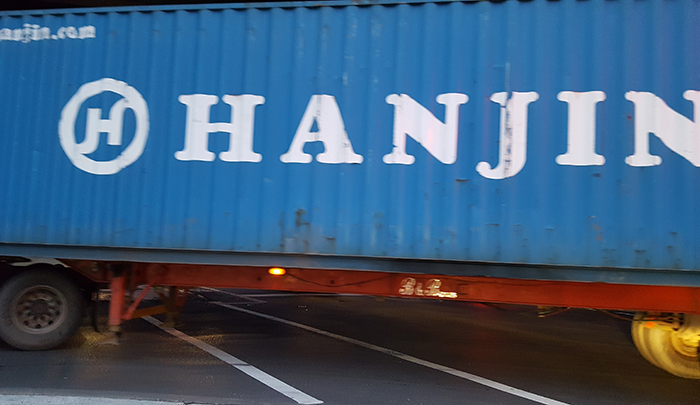 The inability to get Hanjin Shipping boxes back into circulation has been fingered as a factor in a possible container shortage.

The largest terminal in the Port of New York and New Jersey has filed a claim in the Hanjin Shipping bankruptcy case seeking permission to sell Hanjin containers stockpiled in its yards, citing their role taking up yard space.

The legal salvo is the latest sign of how Hanjin containers continue to disrupt the global container shipping market as terminals, container companies, warehouses, and others seek to dispose and put back in service containers that are dotted across the country from New Jersey to California. Some have warned of a brewing container shortage as a result.

“Maher has been and continues to be significantly harmed, as the containers are taking up extremely valuable space at the Maher facility with no corresponding benefit to Maher,” said Maher Terminals, in papers filed Thursday in US District Bankruptcy Court in New Jersey.

The claim says that the containers are clogging up the terminal, which has reached out to the carrier for resolution with no response. Hanjin owes the terminal $3.1 million and Maher believes it can recoup some of those losses by selling or leasing 256 of the containers that have been left in the terminal.

A bankruptcy court in Seoul Central District Court on Friday declared Hanjin Shipping bankrupt, just under six months after it filed for bankruptcy and sought reorganization. A judge in the New Jersey bankruptcy court in December granted the container line Chapter 15 status, recognizing the South Korean case and enabling the court to handle certain issues and hear some claims from creditors.

Several container lessors have expressed concern that the number of Hanjin containers out of service could contribute to a container shortage. Analysts said an estimated 30 percent to 40 percent of the 500,000 containers leased by Hanjin have not yet been recovered by leasing companies. That may be preventing lessors from ordering new containers until they see if they can recover those leased to Hanjin.

“Given the tightness in the market, a container shortage is possible,” Textainer CEO Philip Brewer told JOC.com Thursday, after telling an earnings call that the price of a new container has risen by 80 percent, and the value of used containers has gone up 15 percent to 25 percent. He said that the company has recovered about 80 percent of the containers it leased to Hanjin, and hopes to eventually recover 90 percent of the Hanjin containers.

The terminal since October has had up to 1,700 containers, and although some were removed, 256 now remain, according to a statement in the case by Bradley Sherwin, senior manager of credit/collections for Maher.

Hanjin hasn’t paid any storage charges — which range from $60 a day to $180 a day depending on how big the container is and how long it has been there — since the carrier filed for bankruptcy, the terminal said. Although the terminal has “statutory possession” of the containers under New Jersey law, the outstanding charges likely exceed the value of the containers.

Maher wants relief from a court order, granted when the court gave Hanjin Chapter 15 status in December that stops creditors from “executing against Hanjin Assets” or enforcing a lien against Hanjin assets, or “transferring, relinquishing, or disposing of them.” The court papers say that if allowed to sell the containers, the terminal could get $1,000 for each container, raising $256,000 from the sale of all of them.

The containers at Maher Terminals are some of many across the United States that sit idle, even as as box shortage looms.

In New Jersey, Central Jersey Truck & Rigging in Somerset said it still has about 800 Hanjin boxes at a yard set up by the carrier at the end of September. The yard about 30 miles from the Port of New York and New Jersey had about 1,000 containers at its peak, but owners are slowly taking them away, said Robert Jelinsky, the company’s vice president. He expects any left on the site after Hanjin’s contract expires in March to be sold.

“There will be a lot left over,” he said, adding, “either someone will sell them, [or take them to a] scrap yard. I’m not sure.”

“People want to buy them, but we have to wait until March,” he said, and joked that maybe they could “build houses” with them.

In California, the municipality of Ontario has filed lawsuits against several companies that are allegedly storing containers owned by Hanjin and others in violation of local zoning laws, sometimes up to four containers high.

It’s unclear why the Hanjin build-up occurred in the rural area about 50 miles from the ports of Los Angeles and Long Beach. But in September, a Southern California warehouse owner said he was opening a yard on a 100-acre facility in Ontario, in a move that would help ease a chassis shortage that occurred at that time due to the number of Hanjin boxes sitting unused on wheels.

The warehouse owner, however, is not among those facing a lawsuit filed by the municipality, which target sites that were open even before the carrier’s bankruptcy but now have numerous Hanjin containers. One of the suits accuses two companies of causing a public nuisance and operating a truck stop and/or truck trailer and container storage facility in violation of zoning codes.

Local press reports say there are hundreds of containers on the Ontario sites, and they began piling up after Hanjin filed for bankruptcy.