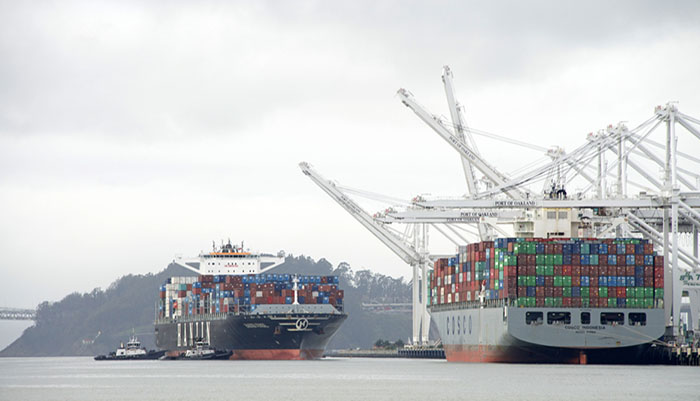 A game of "hardball" related to the Hanjin Shipping collapse is playing out in US federal court.

NEWARK, New Jersey — A federal judge on Friday ordered Hanjin Shipping to reveal when vessels it operates go off charter, opening them up to arrest should they enter US waters without paying off liens held against them, and granting a potentially useful source of information to creditors trying to obtain compensation for unpaid liens.

Judge John K. Sherwood, sitting in US District Bankruptcy Court in New Jersey, made the ruling in a sometimes contentious hearing at the request of OceanConnect Marine Co., which is trying to obtain $837,338 owed by the Seaspan Efficiency for fuel provided at sea. But Sherwood stopped short of requiring the carrier to give advanced warning of when a ship would soon come off charter, accepting the argument by the carrier’s attorneys that such information was in many cases unknown.

The issue is key because Sherwood last month granted protection from arrest to ships chartered by Hanjin in an effort to boost the flow of cargo from the liner’s ships by removing the fear that they would be seized if they came into a US port. The ships lose that protection once they are no longer under charter to Hanjin, and can be arrested at the request of lien-holders provided the vessel is in US waters, or those in Panama and Canada, which also recognize the liens.

Sherwood also ruled Friday that Hanjin should disclose information about the whereabouts of containers and chassis, so that their owners could secure them and prevent them from accruing storage fees.

Sherwood’s rulings came in a nearly three-hour-long hearing marked by clashes between attorneys for Hanjin and several beneficial cargo owners and creditors over whether the company could hold up cargo in order to extract freight payments in certain circumstances, and whether BCOs could withhold payment if Hanjin failed to fulfill all its contractual obligations.

Sherwood at one point suggested Hanjin was playing “hardball” with clients by refusing to give up cargo for which a BCO had paid freight charges in an effort to force the client to pay other bills it owed.

“You are trying to collect on all of your claim without giving any leeway to the claim that BCOs may have against Hanjin,” Sherwood said. “It just seems like you are really playing hardball and using leverage against these people.”

Hanjin attorneys, however, said the company had done nothing that was not allowed under their freight contracts, and were merely trying to secure funds needed to keep the company going. Edward Kiel, a New Jersey attorney for Hanjin, said the company is struggling under the weight of $80 million owed in accounts receivable, including $40 million by its top 40 creditors.

Hanjin is seeking Chapter 15 status in US District Bankruptcy Court, meaning that it would recognize the Aug. 31 bankruptcy filed by the liner in a South Korean court. Approval of Chapter 15 status would enable Hanjin attorneys to take certain measures in the United States to obtain money owed to the world’s seventh-largest container line and move the bankruptcy forward.

Sherwood, who granted the protection of vessel arrest at the start of September, has since spent several hearings ruling on arguments filed by creditors, BCOs, and others seeking to secure payment or access to cargo whose delivery was disrupted by the bankruptcy. Concerned parties are also seeking information about the thousands of containers and chassis that have gone astray amid the carrier’s collapse.

The disclosure of when a vessel comes off charter is particularly important to the case of the Seaspan Efficiency, which is currently waiting to berth at Savannah, Georgia, where it could be seized if it was no longer chartered. The vessel, however, will pick up export containers to be delivered elsewhere, and will be under charter until that is completed, Hanjin’s attorneys said.

“If we can’t arrest it here, we want to arrest it where it goes,” said J. Stephen Simms, a Maryland attorney for OceanConnect Marine, urging the judge to allow him to depose Hanjin officials about the future plans for the vessel, which the judge denied.

OceanConnect Marine fears that the vessel, once it comes off charter, will be shipped to India and broken up — at which point, creditors are unlikely to be able to collect on their lien.

Sherwood also left unresolved several issues revolving around payment and the release of cargo. He scheduled a hearing on Oct. 20 to work toward a resolution on those matters.

Sherwood also made no ruling on whether Hanjin can hold on to cargo even after a particular freight bill had been paid in order to secure payment of other freight bills owed by the same company.

SchenkerOcean, part of third-party logistics provider DB Schenker, is asking Sherwood to force Hanjin Shipping to release 46 containers of goods shipped on the Hanjin Marine in line with its contract. The provider says that it has paid the $55,206 required in the contract, but Hanjin refuses to release the containers until the provider has paid another $970,964 owed for other shipments, some of them made by a Schenker subsidiary, according to court papers filed by the provider.