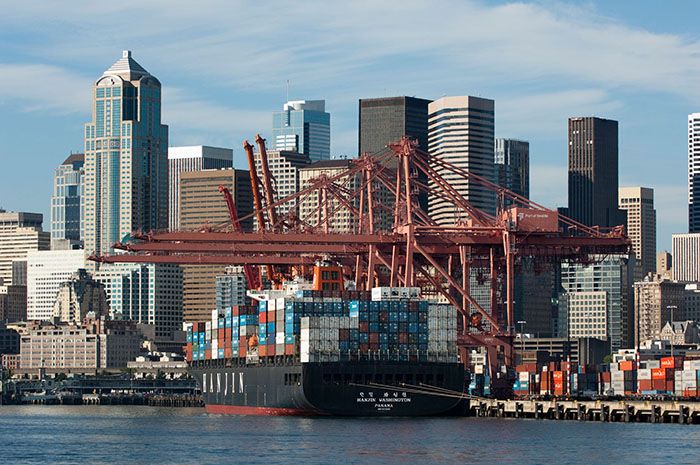 Hanjin Shipping must pick up its containers to free up critical yard space and chassis at ports around the world, including Seattle, pictured.

The anticipated arrival of the Hanjin Seattle at the Northwest Seaport Alliance of Seattle and Tacoma on Oct. 13 could reduce somewhat the empty Hanjin Shipping containers that have accumulated in the Pacific Northwest because the vessel will reportedly take on about 1,000 empties, according to the port authority.

Spokesperson Tara Mattina said the vessel is scheduled to arrive at Hanjin’s terminal, T-46, and the empty containers will reportedly be loaded onto the ship. No further details are available. Spokespeople at the ports of Oakland and Long Beach said the Hanjin ship is supposed to call there after leaving Seattle, but no further details such as whether the vessel will take on empty containers were available from those ports, either.

Definitive reports on the status of Hanjin vessels and containers have been sporadic since the carrier filed for bankruptcy protection in South Korea on Aug. 31. Hanjin also received protection from the US District Bankruptcy Court in Newark on Sept. 6.

Meanwhile, empty Hanjin containers have accumulated up and down the West Coast, many of them sitting on chassis at warehouses and city streets, thereby idling the equipment and contributing to chassis shortages.

In Oakland, however, SSA Marine designated a storage facility where truckers can deliver the Hanjin empties and then pull away with the bare chassis. Port spokesperson Mike Zampa said containers are being delivered to the site, known as the Roundhouse.

A warehouse operator in Southern California told JOC.com last week he expected soon to begin receiving Hanjin empties at his facility in Ontario, about 50 miles from Los Angeles-Long Beach. However, as of Wednesday the venture has yet to begin receiving the containers. Jonathan Rosenthal, chairman of Saybrook Logistics Acquisitions, said that for financial reasons he will accept only empty containers that Hanjin has leased. He said about 40 percent of the estimated 20,000 Hanjin containers in Southern California are leased.