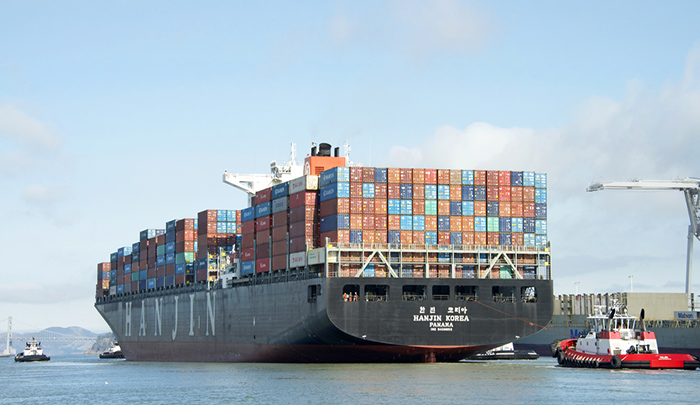 Hanjin Shipping missed a US court deadline to reveal its assets and now must explain its failure in a Wednesday hearing.

Hanjin Shipping’s US liabilities far exceed its US assets of more than $124 million, the company told a New Jersey bankruptcy court Tuesday amid close scrutiny from a host of US creditors hoping to get paid — including one claiming to be owed $22 million.

The troubled container line filed the financial disclosure a day before a US District Bankruptcy Court in New Jersey was scheduled to discuss the ocean carrier’s request to extend a previous Friday deadline to disclose its assets. Hanjin, which filed for bankruptcy in a South Korean court on Aug. 30, missed the Friday deadline and so sought an extension to Jan. 9. But Judge John K. Sherwood scheduled a hearing on the matter for Wednesday.

The hearing comes as Hanjin is seeking to finalize the sale of Total Terminals International, which operates terminals in Long Beach and Seattle and of which Hanjin owns 54 percent. Also Friday, Hanjin filed papers asking the court to recognize and enforce the sale, which has been approved by the South Korean bankruptcy court.

The ocean carrier estimated its interest in the company at $78 million, and property in Paramus, New Jersey, the company’s US offices, at $20.8 million. Hanjin's assets included another $3.3 million for property in Alpharetta, Georgia, accounts receivable of $21.1 million and $1 million in a bank account.

The company estimated liabilities of at least $340 million, including $320 million in bank debt on Total Terminals International, although it was unclear from the papers if that figure was all Hanjin’s liability or also included the share of its partner in the business. The liabilities also included a $20 million mortgage on the Paramus property.

Hanjin said in court papers filed last week that it could not meet the orginal Dec. 23 deadline to disclose its assets because the “myriad aspects of Hanjin’s business and global insolvency proceedings” meant the company has “not had sufficient time to collect and process all the information that is necessary to complete the report.” The company asked for another two weeks to compile the information.

Yet Sherwood, rebuffing the request, ordered the information be filed by Dec. 28, and scheduled a hearing to discuss the matter for the same day. The court will hear Hanjin’s request for approval of the sale on Jan. 12.

Several logistics and other companies who say they are owed money by Hanjin – among them a container company seeking $22 million in compensation – are closely watching the disclosure process, and several have filed court papers in the past to protect their claims.

Two insurance companies, Continental Insurance Company and Continental Casualty Company, immediately filed papers in opposition to Hanjin’s request for a two-week extension, saying that would give it only three days in which to analyze the documents before Sherwood held a Jan. 12 hearing to determine whether the court would approve the sale or not.

“Three business days is simply not enough time for Hanjin’s creditors to review and reasonably evaluate the disclosures,” the insurance companies wrote.

One issue raised in court in the past is whether the proceeds of the sale of Total Terminals International will be available to pay creditors in the United States. The Korean bankruptcy court has approved the sale to Hanjin’s co-owner in the company, Terminal Investment Limited, the terminal operating subsidiary of Mediterranean Shipping Co.

Sherwood ordered Hanjin to disclose elements of its financial position after several companies that have done business with the container line since it filed for bankruptcy urged him to protect their right to claim compensation from Hanjin. Claims accrued after a bankruptcy are treated differently than pre-bankruptcy claims.

Sherwood on Dec. 14 granted Hanjin Chapter 15 status, meaning that US courts recognize the South Korean bankruptcy hearing. That allows the carrier to undertake certain procedures in the United States to move the case along. Sherwood had spent three months ruling on issues raised by shippers, logistics providers, creditors, and others in an effort to help move to their destination some of the estimated 500,000 containers stranded when the company filed for bankruptcy.

The company said in the papers filed Wednesday that since early September it has sent $82 million in accounts receivable collected before and after the bankruptcy petition to South Korea.

The post-bankruptcy creditors have argued that under South Korean law they have a right to make so-called “common benefits” claims anywhere in the world. They pushed Sherwood to ensure that Hanjin’s assets are available to pay such claims, and are not sent straight back to South Korea. But Hanjin attorneys have suggested the place for US creditors to make a claim is in the South Korean bankruptcy court, saying that they will face no prejudice if they file claims there.

Continental Insurance Company and Continental Casualty Company have argued in court papers that their policy holders include companies that provided equipment to Hanjin, who likely will face claims for damage and additional expenses that occurred after Hanjin filed for bankruptcy.

Textainer, the California-based container leasing company, has filed papers to protect potential claims for compensation from Hanjin’s continued use of its containers. TRAC Intermodal, Sea Cube, Home Shopping Network, and OceanConnect Marine have also filed papers in the case.

Earlier this month, auditor Samil PricewaterhouseCoopers, which evaluated the carrier’s financial position at the request of the South Korean court, concluded that it was “highly unrealistic for Hanjin Shipping to be a going concern” once it had sold its assets.

On Friday, Beacon Intermodal Leasing, of Boston, filed papers claiming Hanjin owed it $22 million in a common benefit claim, and asked the judge to recognize the claim.

The papers said that Hanjin, after filing for bankruptcy, terminated a lease agreement it held with Beacon but “refused to return and continued to use and/or possess” Beacon’s containers and equipment “including to conclude voyages and deliver cargo.”

The container company claims it is owed $2.6 million for revenue unpaid by Hanjin, and will incur $6.3 million in “recovery and reposition expenses” for 2016, and another $4.2 million in 2017. The provider is also seeking other expenses, including $5 million for repairs and $1 million in legal fees.

“Hanjin is already subject to litigation involving common benefit claims as a matter of Korean law,” Beacon argues in its court papers. “Beacon simply seeks to ensure that its claim is recognized and that this relief is also available to it here.”