Hanjin bankruptcy preventing empty containers from moving to Asia from US

Hanjin bankruptcy preventing empty containers from moving to Asia from US 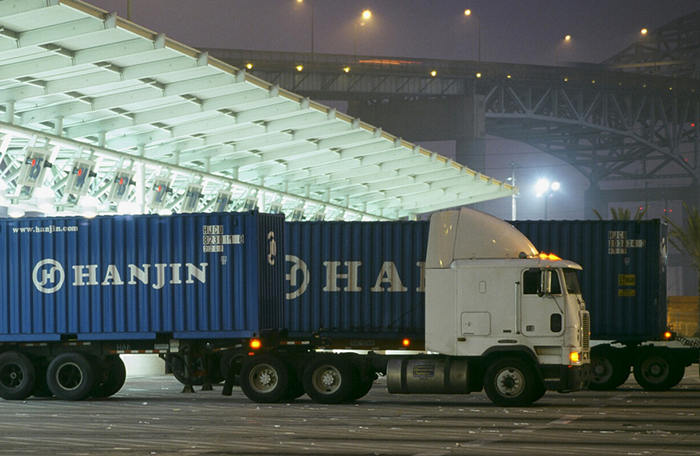 Container manufacturers might actually benefit from the bankruptcy of Hanjin Shipping because shippers are trying to ensure they have adequate container capacity now that the fate of Hanjin boxes is in limbo.

“The big, big problem is you have a ton of containers either on the water or stuck at ports and inland container yards, and that’s going to create a massive lack of containers in Asia,” said Sri Laxmana, director of global ocean services at logistics company C.H. Robinson Worldwide.

In Asia, Laxmana said, orders for containers have “skyrocketed overnight” to compensate for the specific lack of empty Hanjin containers heading back to Asia, as well as the containers of Hanjin partners such as China Cosco Shipping, Yang Ming and Evergreen Line that may be on Hanjin ships.

“Unless there is an extensive plan to address that imbalance, there will be a container problem on the inbound side, at least for the foreseeable future,” said Laxmana. Most US railroads, he said, are refusing to accept empty Hanjin containers heading to ports for return to Asia.

“You’ve got a problem on the front end and the back end,” Laxmana said. “At the end of the day, even if we have access to the containers and solutions to move them inland, the empties remain a question mark.” Repositioning containers may require more long-haul drayage, he said.

Before they become empties, loaded Hanjin containers have to make their way inland and Laxmana sees problems surfacing there too. “We could possibly pick the containers up, but I’m hearing that some of the chassis providers are declining to take Hanjin containers,” he said.

“The bigger problem is that everything is going to come at once,” he said. “You’ve got Hanjin vessels bunching at ports. All those containers are going to be unloaded at once.” That will lead to port congestion, and difficulty moving boxes to import warehouses for deconsolidation.

There shouldn’t be much of a problem on the inbound truckload side, thanks to excess capacity in that sector. “From a truckload perspective I think, a lot of companies will have the ability to adapt by shifting capacity around,” he said. “In this environment, that is an option.”

Shippers are likely to turn to expedited air freight, and C.H. Robinson Worldwide does offer air freight forwarding as well as ocean services, he pointed out. At many retailers, “you will naturally see expedited movements to fulfill the delivery dates that have been committed,” he said.

But the disruption caused by the sudden bankruptcy won’t dissipate quickly. “There’s many moving parts of this,” Laxmana said. In 16 years with C.H. Robinson, “I’ve not seen a global ocean carrier flat go out of business. We’ve never seen something of this magnitude.”