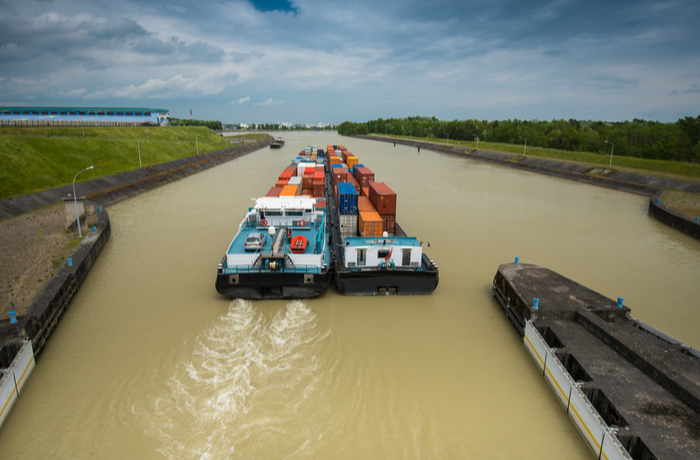 The Maritime Administration has given out $33.8 million in grants to so-called Marine Highway projects over the last four years. Photo Credit: Shutterstock.com.

The latest round of grants, which includes another $3.8 million for moving bulk commodities and yard improvements, are part of the US Marine Highway program. The Department of Transportation’s Maritime Administration (MARAD), which runs the program, has given out $33.8 million in grants over the last four years for such projects.

The grants will go to waterborne freight services in Illinois, Indiana, Kentucky, Louisiana, New York, New Jersey, Oregon, Tennessee, Washington, and American Samoa. Tidewater Barge Lines of Vancouver, Washington received the largest of the grants, $3.2 million, to support the expansion of barge services between the Port of Morrow in Boardman, Oregon and Vancouver.

The service, along the Columbia River, aims to take trucks off of a 166-mile (267 km) stretch of Interstate 84, the second-busiest highway in Oregon, according to data from the state’s transportation department. The Port of Morrow itself won a grant from MARAD earlier this year to complete a breakbulk terminal aimed at serving the state’s wind energy projects.

SEACOR AMH, which operates a container-on-barge service, along the Mississippi River, received $778,000 toward boosting capacity on 29 barges that operate between Memphis and Port Allen, Louisiana. Shippers use the service to bring containerized resin to the Port of New Orleans.

Container-on-barge services in the Port of New York and New Jersey will also get a boost through two grants totaling $456,000. Most of that will go to US Coastal Service, which plans to launch a barge service between Kearny Point, New Jersey, and Newtown Creek, straddling the boroughs of Brooklyn and Queens. MARAD said the service will reduce traffic by eliminating up to 6,000 truck-miles weekly.

Another grant will go to the Red Hook Container Terminal in Brooklyn for the purchase of low-emission yard tractors in support of barge operations there.

America’s Central Port, a bulk commodities port on the Mississippi River in Granite City, Illinois, received $1.2 million to buy a 275-tonne crane and a container tilter in support of its container-on-barge service that links New Orleans and Chicago. The Port of Pago Pago will also receive a $943,000 grant aimed at rehabilitating dock fendering, resurfacing the container yard, and buying new yard equipment.

Among other projects receiving funding, Charlotte, North Carolina–based Nucor Steel received the second-biggest award, $2.3 million, which will go toward the construction of a marine terminal to serve its new Brandenburg, Kentucky steel mill. Nucor’s Gallatin steel plant in Ghent, Kentucky, which is also being expanded, will benefit from a $545,000 grant toward the purchase of a new forklift and the construction of a new laydown area at the Port of Indiana-Jeffersonville.