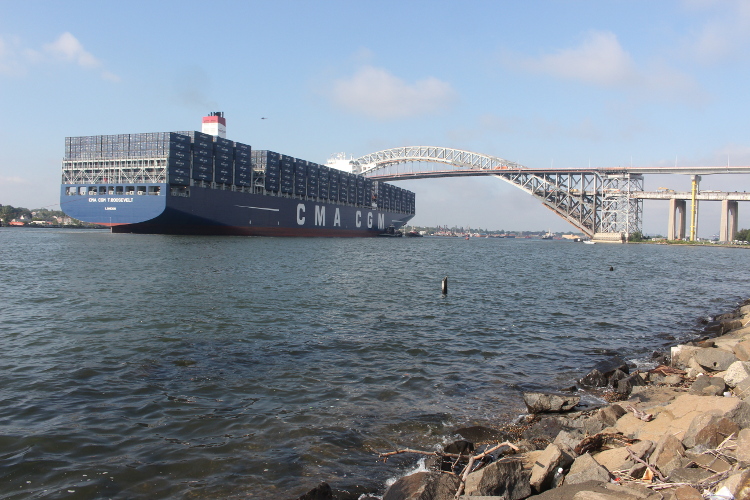 The 14,400-TEU CMA CGM T. Roosevelt approaching the raised Bayonne Bridge in New Jersey in September 2017. The bridge was raised to accommodate the new mega-ships being deployed by ocean carriers to accommodate the growth in global trade in the decade ahead. Photo credit: Hugh R. Morley.

Ocean carriers earned $7 billion in 2017, according to Drewry — the first profitable year after six straight years of losses — and the consensus among shipping decision makers, analysts, and economists at this week’s maritime forum at the New York Metropolitan Club was that the fundamentals are in place for another, substantial increase in container trade in 2018 — provided an absence of human error.

The top human action that has the potential to ruin the world’s first year of 4 percent global growth since the onset of the financial crisis is familiar to shippers. It is, at the nation-level, domestic political issues calling for protectionism and the tariffs and regional/global trade war that could follow. The Trump administration’s abrupt announcement March 1 of a plan to impose a 25 percent tariff on steel and 10 percent on aluminum, and recent Washington chatter of additional US tariffs on China, along with possible retaliation by China, have understandably concerned shippers and others involved in international trade.

However, Howard Finkel, Cosco Shipping Lines North America executive vice president, told attendees of the forum’s container shipping roundtable that even though the Trump administration has implemented tariffs on steel and aluminum, shippers should not assume the developed/developing world is incontrovertibly on the road to a global trade war.

“Will there be retaliation to Trump’s tariffs? Yes there will be, if it continues … and if it occurs it would hurt exports,” Finkel said. “But I see his [Trump’s] action as more of a ‘showmanship policy’ as part of a negotiating tactic. I don’t think he wants to hurt exports.”

“All of the economic projections are indicating 4 to 5 percent container shipping growth,” Finkel said. “We like to be optimists at Cosco, so we’re thinking 4 percent growth.”

Independent survey research is in-line with the aforementioned estimate. IHS Markit predicts that global container trade will increase 4.9 percent in 2018, after a healthy 4.7 percent increase in 2017. The data and intelligence company also forecasts a 5.1 percent container trade rise in 2019.

George Youroukos, founder/managing director of Technomar Shipping Inc., agreed with Finkel but voiced a cautionary observation on the state of international political relations — even as the world’s regional economies and international trade are set to record their best year in a decade.

“I’m not worried that a trade war, and the threat of tariffs, will hurt containers,” Youroukos said. “It won’t get to that point. But if it does, it is going to be horrible, the least of our concerns.”

Yourourkos added that in his interpretation 2016 indicated that container demand was strong — charter rates did not nosedive — and that 2017 “was not really a restocking year.” As a result, Youroukos predicted “a couple good years regarding container demand.”

Indeed, aggregate demand in two major economic regions, the European Union and the United States, supports the argument that international trade is poised for a substantial rise in 2018, after a solid 2017. In the European Union, GDP growth is above trend. The United States, aided by a federal tax cut and an improvement in business confidence, has recorded three consecutive quarters of plus-2.5 percent GDP growth, 3.1 percent, 3.2 percent, and 2.5 percent, in second quarter 2017 through fourth quarter 2017.

IHS Markit forecasts that 2018 global GDP growth will match the 3.2 percent achieved in 2017; the latter was the strongest growth in seven years and a substantial acceleration from the 2.5 percent growth registered in 2016.

Despite the bullish container trade and GDP growth, that does not mean container shipping professionals should end their cost-containment focus, for two reasons, conference attendees said: the arrival of next-generation technology and limitations of even a solid-growth international trade environment.

Columbia Marlow Ship Management CEO Mark O’Neil, speaking at the forum’s maritime industry game-changers panel, said digitization technology made a statement in the shipping industry in 2017; not to move forward on that front would result in failing to harness the technology’s benefits.

O’Neil said that “digitization is a process,” not one act, and that although implementation of the tech will be uneven industry-wide, those ocean carriers that do not optimize will find it harder to compete with those that do, as it will be among the tools carriers use to lower costs.

And at the container shipping panel, Finkel underscored the need to contain and lower costs, particularly slot cost.