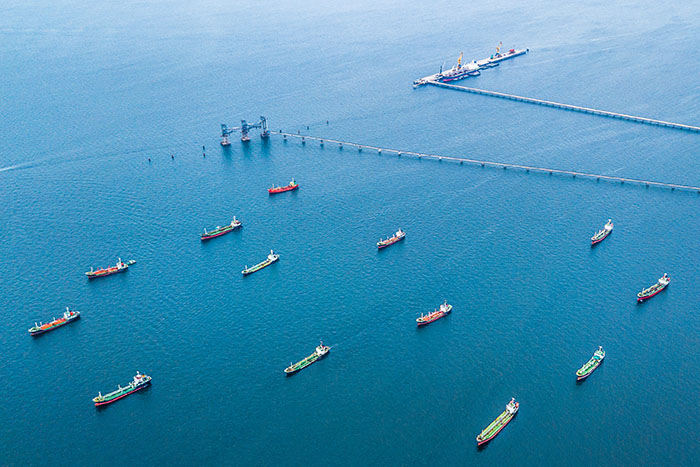 The decarbonization of container shipping will be carried out in two phases: reducing emissions through design and operations of ships that still burn fossil fuels in the short term, and the development of actual zero-emission vessels (ZEVs) in the long term. Photo credit: Shutterstock.com.

Shippers of containerized cargo for years have benefited from carriers’ inability to increase rates, but it’s becoming increasingly difficult to envision a future in which costs won’t increase, possibly by substantial margins.

Signs of a less friendly pricing environment for shippers are already visible due to carrier consolidation, which has reduced the number of major carriers by half over the past four years and improved carriers’ agility in adjusting capacity in response to changes in demand. The International Maritime Organization’s (IMO's) low-sulfur fuel mandate inevitably will lead to somewhat higher overall costs next year that most major shippers already are anticipating, having accepted fuel surcharges in contracts to the evident satisfaction of the carriers.

But there is a bigger bill coming in the form of decarbonization, and although it’s impossible to put a price tag on it now, it’s inconceivable that the accelerating global response to climate change will somehow bypass maritime shipping given the industry’s 2 to 3 percent contribution of global carbon dioxide (CO2) emissions is approximately equivalent to major industrial countries, such as Germany.

The impact on container trade will be felt in essentially two phases, both driven by the IMO’s 2018 initial greenhouse gas (GHG) strategy. The first is the near-term effort to reduce emissions through design and operations of ships that still burn fossil fuels. More ambitious and more difficult to achieve, the second goal is the development of actual zero-emission vessels — so-called ZEVs — that will require a new fuel infrastructure equivalent to today’s bunkering system, one that doesn’t neutralize the positive impact from shipping by being carbon intensive in its production.

For container shipping in particular, the impact of decarbonization could hit home sooner than many realize. A recently announced coalition has set a goal of deploying a zero-carbon vessel by 2030, focusing on assessing the viability of scaling non-carbon fuels out of the several possible options such as ammonia, hydrogen, and biofuels, each of which is far from a perfect solution. The 2030 pledge grew out of Maersk Line’s 2018 commitment to deploy a fully decarbonized fleet by 2050 which, due to the 20- to 25-year lifespan of ships, necessitates the first such vessel be on the water by 2030.

Although the next decade will see a whirlwind of research, debate, and anguish over the viability of alternative power sources for ships, the urgency to take additional action in the short term is growing steadily. For shipping to achieve the goal of a 50 percent absolute reduction in GHG emissions from 2008 levels by 2050, which supports the Paris Climate goal to keep temperatures well below 2°C above pre-industrial levels, actions will have to be taken in the near future to set emissions on a downward trajectory over and above carbon
reductions achieved by shipping over the past decade through voluntary slow steaming to cut costs.

Vessel speeds across bulk, tanker, container, and other ships over the past decade have dropped by 21 percent, according to Clarksons. That’s reduced CO2 emissions and fuel consumption by 18 percent, while ocean borne trade volumes have grown 37 percent. But that progress isn’t allowing the shipping industry to gain an advantage in the global decarbonization debate. If anything, calls for further near-term action are only intensifying. French President Emmanuel Macron has called for mandatory slow steaming, and his government this month endorsed plans for a carbon tax, as first reported by online shipping news outlet Splash 24/7.

Behind that urgency is the troubling reality that “we are nowhere close to meeting the (2°C) climate goals globally,” said Atul Arya, an energy expert with IHS Markit, parent company of JOC.com.

Container carriers have a ready and compelling response to those who would impose speed limits, namely that slower speeds would require more ships that, if built today, would still utilize existing carbon-based fuel technology. That would draw down capital the industry will need to build a new generation of ZEVs once consensus has formed around new technologies. But whether that argument will be enough to hold back a rising tide of climate activism is unclear.

This is especially the case because there are significant doubts about whether potential operational measures, such Port Call Optimization, which focuses on improving port turnaround times so as to allow for greater slow steaming while adhering to schedules, or vessel design changes to improve fuel efficiency, can make a significant enough dent in greenhouse gas emissions from shipping to send overall emissions on a downward trajectory.

In other words, the 2050 goal of a 50 percent absolute reduction in GHG will be rendered unachievable without near-term actions that must occur well before zero-carbon fuels come into existence. And, although we don’t know exactly what those actions will be, we do know they won’t come without a price.