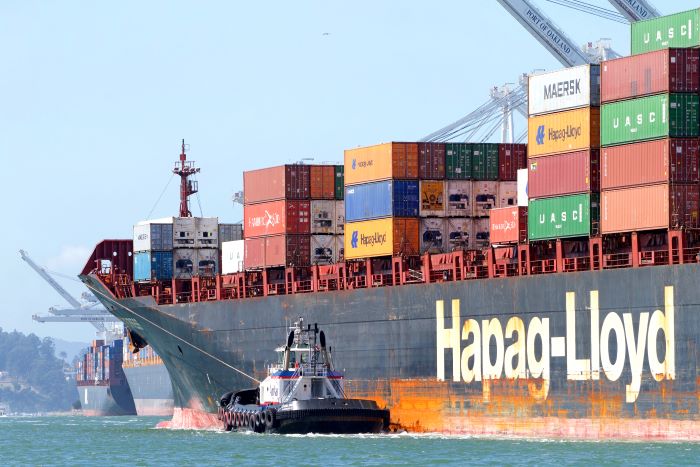 Spot rates booked on Maersk and Hapag-Lloyd’s websites now account for more than 10 percent of each of their total spot rate transactions. Photo credit: Shutterstock.com.

The increasing rollout of e-commerce booking tools by container lines provides a path to break away from the commodification of their services, and, ultimately, charge higher rates.

Just as the airlines have been able to price passenger seats by demand, carriers see similar potential in adjusting slot rates based on seasonality, supply and demand on a specific sailing, and costs associated with a specific shipment or customer. Through so-called dynamic pricing, carriers would have the ability to set prices and change them frequently, shielding them to some degree from commodity pricing and allowing for greater value to be created through their service offerings.

Carriers have struggled over many years to set prices based on underlying type or value of the cargo, their efforts undermined by price competition that left carriers often selling an undifferentiated market rate monitored by public indices and which move based on overall market supply and demand. The result was that for most of the post-financial crisis decade, carriers turned to cost control as the main area of their business they are able to exercise control over, including embracing slow-steaming and mega-container ships.

But with the rapid uptake in online e-commerce tools with mutual commitments on the part of both the shipper and carrier, the door has been opened to a future where carriers, at least for the 40 to 50 percent of cargo that moves on the spot market, can begin to see a path to pricing dynamically. Spot rates booked on Maersk and Hapag-Lloyd’s websites now account for more than 10 percent of each of their total spot rate transactions.

Pricing dynamically would, all else being equal, enable carriers to charge higher prices, by itself an indication it is a step away from commodity pricing. According to Mizzen Group, which develops container pricing tools for carriers and forwarders, container lines on average improve their revenue via dynamically quoted rates versus static rate quotes, by $110 per 40-foot container, or FEU.

“Dynamic pricing means the price varies based on demand and available supply at the time the contract or booking is made,” said Gordon Downes, founder and CEO of the New York Shipping Exchange (NYSHEX).

The ability to price dynamically is predicated on a mutual commitment at the time of the transaction between the carrier and customer, whether a forwarder or shipper. Container shipping has historically lacked a business culture of contractual mutuality, with few consequences for cargo that doesn’t show up as booked or doesn’t get loaded on a scheduled voyage. The percent of cargo that doesn’t show up as booked for a particular voyage is typically higher than 20 percent and sometimes as high as 50 percent, with penalties rarely assessed. Industry average downfall rate is 24 percent, Downes estimates.

But mutual commitments have started to emerge with the growth of services such as NYSHEX, which provides a neutral platform for spot and contract transactions, with penalties on both sides for non-performance, and in spot e-commerce tools offered by carriers including Maersk and Evergreen. NYSHEX says 99% of transactions completed on its platform are fulfilled by both the shipper and carrier.

It’s the mutual commitment in transactions that opens to the door to dynamic pricing.

“Both the carrier and shipper need the underlying enforceability for it to work, because if you don’t then every time the price goes down, shippers have an incentive to walk away from the first contract or booking, and make a new one at a lower price,” Downes said. “On the flip side, every time the price goes up, carriers will disregard bookings or contracts from lower-paying shippers and will allocate their space and equipment to the highest-paying shippers to maximize their revenue.”

The industry is not yet at the point where dynamic pricing has taken hold. But preconditions such as mutual enforceability of transactions are beginning to fall into place.

“The industry is only in the early days of a more pervasive and structured use of dynamic pricing. In order for true dynamic pricing to fulfill its true potential it requires a number of elements to be in place,” said industry analyst Lars Jensen. “These include a large uptake of the use of online tools for the procurement of freight services, a strong link in the carriers' backend systems for capacity allocation, a stronger element of contract enforcement, as well as a consistent approach in managing the non-freight service elements for customers who book part of their freight on traditional contracts and part of their freight on online tools driven by dynamic pricing.”

Others see dynamic pricing coming, but acknowledge the industry isn’t there yet.

“I can see dynamic pricing evolving in the ocean space, but right now it’s very rudimentary,” said Virgil Ferreira, CEO of the rate management tool Catapult. “What you are getting today is the standard price, where I as a big shipper am getting the same rate from a carrier as the mom-and-pop shop. But you are going to see a trend like in the airline industry where it’s more sophisticated.”

“Our industry from an ocean perspective is not there yet,” he added. “It’s going to go there, but today’s dynamic pricing is more based on operational factors like service and space, in future it must also take commercial factors into account, like customer profiles and behaviors.”

The airline industry, often held out as an example of where container shipping should be headed in dynamic pricing, is actually not that advanced in this area.

According to Travel Weekly, the legacy price distribution system created after airline deregulation in 1978 allows for only 26 fare classes, and carriers are able to update prices in each fare class four times per day on domestic flights and on an hourly basis on international flights. It was only in 2018 when airlines began basing pricing decisions on the individual’s personal flying history and other personal data. “Imagine if airlines could tailor fare offers based on who was making the ticket inquiry, rather than strictly on the search criteria,” the mid-2018 article asked, revealing the limitations of dynamic pricing in commercial aviation.

Some see great potential in container line dynamic pricing, including pricing based on micro-criteria such as supply and demand on a specific sailing and the carriers’ cost to deliver the service to specific customers.

“Dynamic pricing to the individual vessel voyage will mean the spot price can be reflective of the supply and demand for that single vessel at the point of booking,” Mizzen managing director Jon Charles wrote in a JOC.com analysis in March.

Charles wrote that “the most significant and fluctuating variable cost component for a shipping line” is the amount associated with equipment “depending on if the container is moving to and from a surplus, balanced, or deficit port. This adds a degree of complexity that is absent in airline and hotel revenue management models, which are often referred to as potential solutions to liner shipping.”