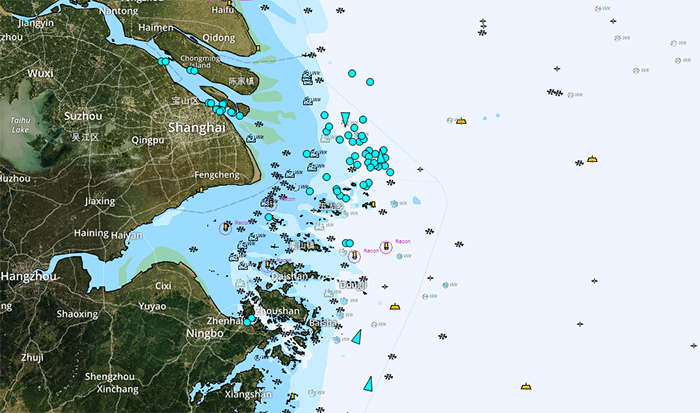 
Shippers using the North Chinese ports of Shanghai and Ningbo can expect delays over the next few weeks as a blanket of dense fog envelops the region and carriers struggle to maintain schedules.

Lengthy vessel delays are being reported and some carriers have been forced to omit calls at Shanghai, the world’s busiest container port, and at Ningbo-Zhoushan, the fourth-busiest port in the world.

IHS Markit’s AIS ship tracking of a selection of the ships waiting outside Shanghai shows that eight vessels have been at anchor for two days, four ships have been anchored for three days, and seven have been sitting at anchor for four days or more.

Heavy fog in North China is common at this time of year and creates major headaches with ship calls. An APL spokesperson said intense fog has been hanging over the Shanghai and Yangtze River Delta area over the past two weeks, causing disruptions to port operations and ocean carrier services with one of its vessels having to omit a Shanghai port call.

In an advisory to customers, APL said terminals in Shanghai were gradually reopening as the dense fog begins to dissipate and port operations at the city’s Waigaoqiao and Yangshan terminals was resuming. However, APL said the Shanghai Maritime Safety Administration has advised that it may take two to three weeks for operations to return to normal in Shanghai and customers can expect delays to their shipments.

A large international freight forwarder told its customers that the situation was improving but there remained a high risk of port closure through tomorrow (Saturday, April 14) because of heavy fog. A Kuehne + Nagel executive in Shanghai told JOC.com that the fog at the end of March caused “massive delays” but that was starting to ease.

An Orient Overseas Container Line spokesperson said fog caused the ports of Shanghai and Ningbo to shut down for safety reasons over the past couple of months and that led to delays and congestion, but no OOCL ships had to cancel port calls.

Shanghai in 2017 became the first port to handle 40 million TEU in a year, growing its annual volume by 7 percent compared with the previous year. The port in December began operations at its new automated Terminal 4, which has been described as the world’s largest unmanned container terminal.

APL said it has begun calling at the terminal and suggested that because it was strategically located near the open sea — Yangshan port lies across two islands more than 30 kilometers off the mainland — it gave the carrier’s customers additional options when faced with the heavy fog.