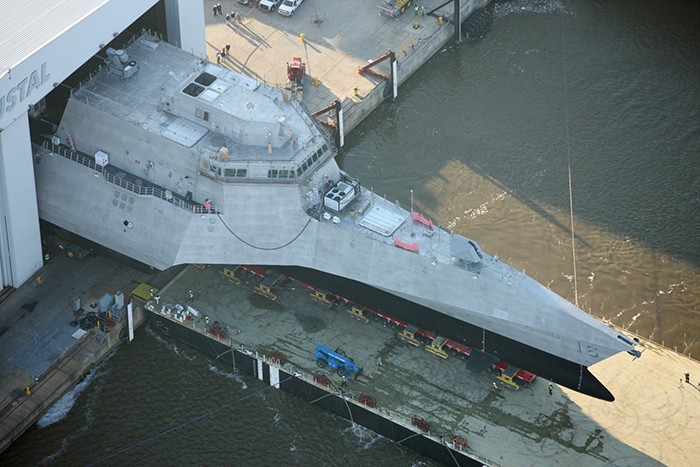 A Crowley barge is positioned under littoral combat ship Tulsa as it leaves drydock.

After nearly two years of litigation, Crowley Logistics Inc. has emerged the winner over XPO Logistics for a US Department of Defense (DoD) services contract that could be worth up to $2.3 billion over seven years.

The DoD’s US Transportation Command (Transcom) confirmed the contract this week after the US Court of Federal Claims rejected competing lawsuits by Crowley and XPO, which unsuccessfully bid against Crowley for the contract.

The defense transportation services contract is one of the largest defense logistics contracts. It covers a two-year base period followed by five option years that could bring the total value to $2.3 billion.

Delivery locations include vendor facilities, Defense Department warehouses or depots, and US military installations. Under the contract, Crowley will initially provide services for select Defense Department agencies, with the expectation that other DoD customers and agencies outside DoD would soon be added.

“We look forward to providing solutions that enhance the efficiency and reduce the cost of critically important services required by our military,” said Tom Crowley, chairman and CEO of Crowley Maritime Corp., parent company of Crowley Logistics.

Confirmation of the contract followed protracted objections and litigation. Transcom originally awarded the contract to Genco Infrastructure Solutions in December 2015, but reopened bidding after a successful protest by Crowley. Genco dropped out of the bidding, leaving Crowley and XPO as the remaining competitors.

Crowley won the second round of bidding in November 2016 but XPO, which now provides some of the services covered by the contract, launched a legal challenge. A Court of Federal Claims ruling in June cleared the way for Transcom to confirm the original contract award to Crowley.

“This confirmation of the contract award hopefully ends the legal contest,” said Frank Larkin, Crowley senior vice president and general manager of logistics and commercial services. “We are eager to get started, and will be bringing best commercial practices to our government customers — providing transportation solutions that increase the velocity of the DoD’s supply chain, reduce their overall landed costs and help our military fulfill their missions.”