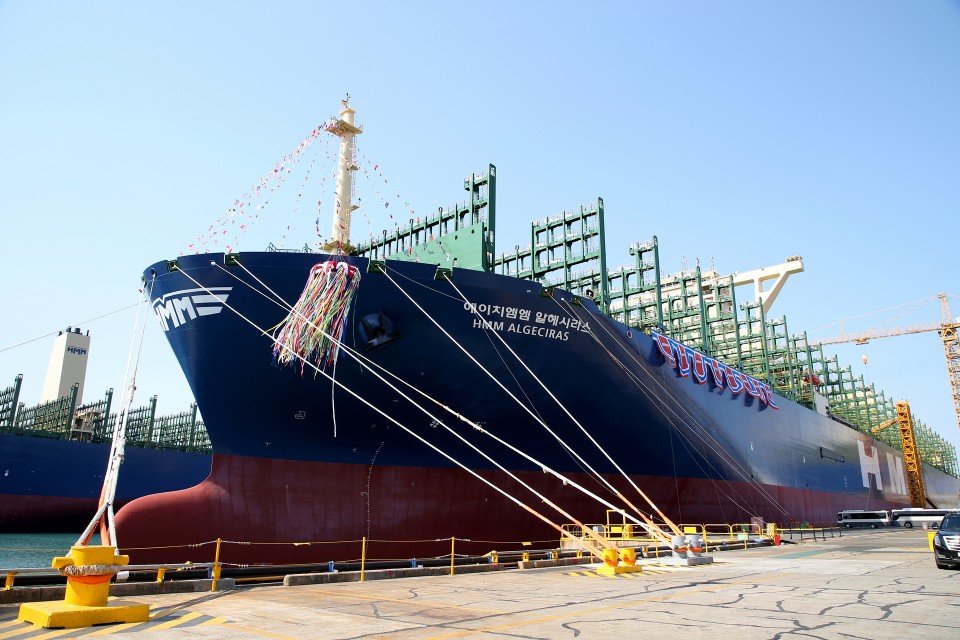 The HMM Algeciras is the first of 12 ships, each with a capacity of 24,000 TEU, ordered by HMM, which now holds the title of the operator of the largest container ship globally. Photo credit: HMM.

The COVID-19-driven decline in container trade may finally end carriers’ interest in ultra large container vessels (ULCVs) and focus their fleet replenishments on smaller — but still large — ships that can be deployed on more trade lanes.

The reasoning behind deploying ULCVs is that the larger the ship, the greater the ability to spread operating costs over more boxes, allowing carriers to bring down the average cost per container. But economies of scale only work when a ship is full, which typically only happens on headhaul trades at peak periods.

“There has been talk for a number of years that we have reached the end of the scale increases in vessel size, and the current crisis might cause a rethink in vessel size,” said Theo Notteboom, a Europe-based academic in maritime studies. “In the longer term, there is also a concern that the US-China trade war will see near-shoring moving manufacturing away from China, so the economic activity” will be increasingly regional, rather than global.

From a flexibility perspective, new-Panamax vessels, with capacities ranging between 10,000 to 15,000 TEU, allow carriers to deploy the largest ships able to traverse the Panama Canal while still benefiting from economies of scale, Notteboom told JOC.com. Ships with capacities of up to 14,500 TEU can transit the waterway.

The scale of the payoff from building larger vessels to reduce average slot costs, however, begins to weaken as ship sizes near 20,000 TEU. Additionally, analysts say that bigger ships mean larger safety risks in part because large volumes of cargo on board puts added stress on the ships.

“The logic on Asia-Europe has been on achieving cost leadership by investing in the biggest ships possible and being part of an alliance. But the current crisis could be a game changer,” Notteboom said.

The world’s largest container vessel was named Thursday by HMM in South Korea. The HMM Algeciras is the first of 12 ships, each with a capacity of 24,000 TEU, that will all be in service by September on the Asia-Europe trade, which contains the only routes that can accommodate such large vessels.

That lack of options locks ULCVs into Asia-Europe routes and limits the giant vessels to the few hub ports capable of handling container exchanges per call that can reach 10,000 TEU.

A sea change in ship ordering?

Lars Jensen, CEO of Sea-Intelligence Maritime Consulting, told a JOC.com webcast last month that carriers should begin now to plan for the trade patterns that will emerge in the coming decades as developing nations increase their import and export volumes.

“We need to be clear on the standard vessel needed by 2050 and start ordering them for fleet replenishment,” he said.

“Supply chain dispersal will become more pronounced,” Jensen said. Although the mega-ships will still serve the highest-volume trade lanes linking North Asia with Europe and North America, carriers should direct future orders toward somewhat smaller vessels that are better suited to the ports and infrastructure in faster-growing regions such as Central and South Asia, Latin America, and sub-Saharan and North Africa, he said.

ULCVs of 15,000 TEU and above continue to dominate ship orders, accounting for 58 percent of the order book that stands at 2.5 million TEU, according to analysis by IHS Markit, parent company of JOC.com. The total capacity of ordered ULCVs, which include ships as large as up to 24,000 TEU, will boost the total UCLV fleet by 44 percent — if all ships are delivered.

The largest share of the ULCV orders is held by the Ocean Alliance (CMA CGM, Cosco Shipping, OOCL and Evergreen) at just over 800,000 TEU, followed by THE Alliance (Hapag Lloyd, Ocean Network Express, Yang Ming, and HMM) at just under 400,000 TEU, and the 2M carriers (Maersk and Mediterranean Shipping Co.) at 145,000 TEU.