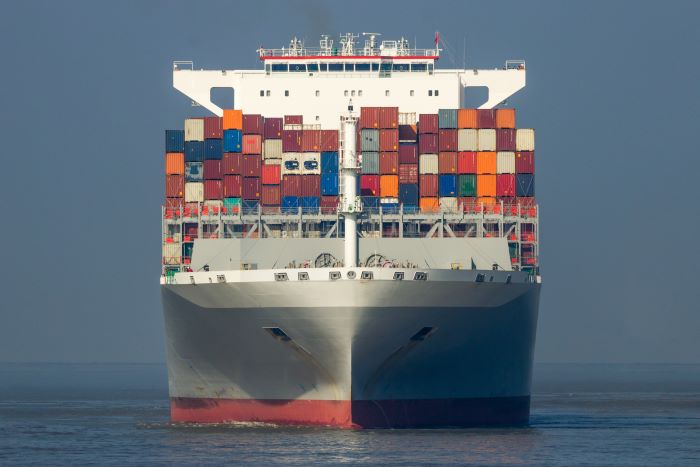 Despite sharp drops in cargo volumes and fuel prices, freight rates have essentially remained stable, an early sign of the change in pricing power coming into the new decade. Photo credit: Shutterstock.com.

When the container shipping industry goes through a major crisis, it appears to coincide with fundamental shifts in underlying drivers. Not that the crisis in itself causes the change, but it provides a “push” to accelerate an underlying trend that was already in the making.

The current pandemic crisis is the third time in the new millennium where we are about to witness a fundamental shift. A closer examination will show many more nuances than can be covered in this space, but from a helicopter perspective it is instructive to look at the changes in the first two decades of the millennium and then the anticipated change in store for the third decade.

The first change came early in the millennium, sparked by first the recession in the US in early 2001 and subsequently the fallout from the 9/11 attacks. The most important fundamental change during this period was the commoditization of container freight. Multiple changes put together led to this development. After the early heydays of containerization, we entered a period of beginning consolidation. Prior to the new millennium, all carriers could, to some degree, be said to be niche carriers — geographically, in their service concept, or in their customer base. That changed as larger consolidated carriers needed to embrace the needs of a much more diversified customer base.

Additionally, a strong drive to reduce costs led to an outsourcing wave of customer service tasks as well as the introduction of early e-commerce tools. The net effect was to drive many smaller cargo owners into the arms of the third-party logistics providers. Effectively, the carriers drove a high degree of commoditization into the business models.

The second change came in the wake of the 2008-09 financial crisis. Container shipping had enjoyed high growth rates for a couple of decades, initially driven by the containerization process itself, and subsequently by the vast boom in outsourcing of production, to China especially. By the end of the first decade, this boom in outsourcing had reached a natural endpoint, and container lines would have to contend with growth “only” driven by the underlying economic growth. This was a fundamental shock to an industry where the most important strategic competitive element for decades had been the ability to grow rapidly. This changed into a need to focus on yield management and unit profitability. One of the ways to address this was a continued consolidation drive that provided the allure of both continued growth, as well as cost reductions through larger scale.

The third change for the third decade of the millennium is being triggered by the coronavirus disease 2019 (COVID-19) pandemic. The past 20 years of consolidation has led to the establishment of a de-facto oligopoly among the main deep-sea carriers. A highly fragmented competitor landscape in a commoditized industry having high fixed costs is not a viable business landscape, as it leaves all pricing power with the buyers.

The development seen over the past three months shows that the carriers for the first time are showing their newfound strength. Despite sharp drops in both cargo volumes and fuel prices, freight rates have essentially remained stable. This is not a development we have seen before. It is an early sign of the change in pricing power coming into the new decade. Decades of upscaling vessel sizes as well as consolidation into ever-larger carriers have created a landscape where the barriers of entry into the main deep-sea trades are now so high that it is next to impossible for any newcomer to truly break into these trades on a material scale.

Clearly there are also other changes emerging, notably in the arena of digitalization as well as in the balance of power between logistics providers and the carriers, but these changes all have to be seen in the context of a new oligopolistic environment.

Another way to outline the three decades from 2000-2030 is that the first was characterized by rapid volume growth, and the second by pricing wars and a highly unstable freight rate environment as carriers attempted to continue the high-growth regime from the prior decade. The third decade that is just beginning is poised to be characterized by a higher degree of stability as the resultant oligopoly reduces the likelihood of price wars. We are still in the early stages of this third phase and hence it should be expected that carriers still need to “find their feet” in the oligopolistic world and some hiccups should be expected. But all stakeholders in the container supply chain would do well to look at their long-term strategies and incorporate this fundamental shift of market power in the competitive landscape.