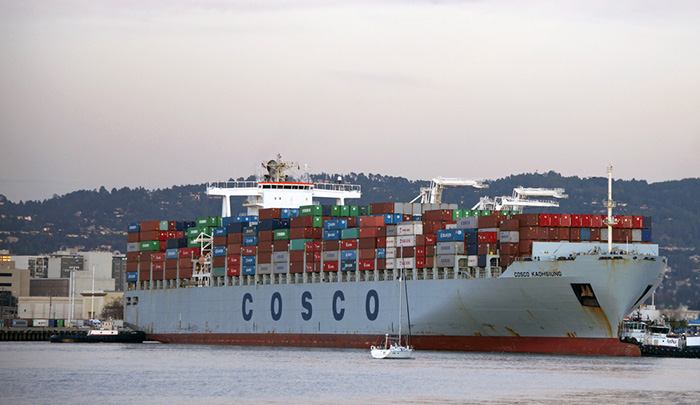 The date is in line with an earlier CSCL memo that said the companies’ assets would be combined early in 2016.

Cosco petitioned the FMC for permission to provide a universal notice to the commission and to customers that would avoid the need to file an amendment for each of the 700 China Shipping service contracts that Cosco will renumber and republish.

In addition to the universal notice, Cosco proposes to provide each shipper with an electronic notice of the change. Cosco also seeks a waiver to avoid amending each contract with the new tariff number, by publishing a notice of the change in the existing China Shipping and Cosco tariffs.

Following the merger of the container lines’ parent groups, Cosco and China Shipping signed an agreement in December under which China Shipping will charter all of its container ships to Cosco for a five-year-fixed term, with bilateral options later for vessels with capacities of at least 8,000 twenty-foot-equivalent units.

Once the complicated merger of the two state-owned carriers is completed, the CSCL division will cease to be a container carrier and will take on a ship leasing and financing role, leaving all the container transport to Cosco.

Earlier this month, China Shipping warned investors that it will have a 2015 net loss of $430 million amid record low freight rates and vessel impairment losses.

Nothing on the organizations,

Permalink Submitted by ferrullig@minds... on Jan 28, 2016 11:50AM EST
Nothing on the organizations, which is as important to customers as anything else. Who do they talk to??

Nothing on the organizations,

Permalink Submitted by ferrullig@minds... on Jan 28, 2016 11:50AM EST
Nothing on the organizations, which is as important to customers as anything else. Who do they talk to??

Permalink Submitted by kcwiebke@aol.com on Jan 29, 2016 9:16AM EST
With CSCL disappearing assume there will be major consolidation of back office staff.. Wonder how many American citizens will be unemployed as a result and if if the FMC even considered that; It seems their precious tariffs and service contracts will be just fine though. .