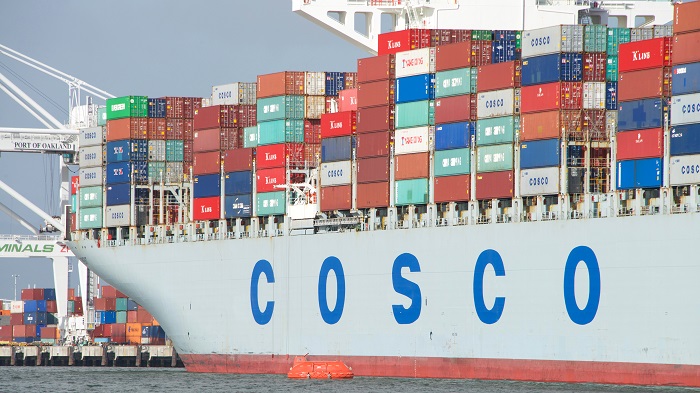 China-based carriers Cosco Shipping and Orient Overseas Container Line, two of the fastest-growing carriers in the US trades, are set to emerge as the largest carrier of US imports after their merger later this year. The carriers’ combined share of US imports, at 13 percent, is another reminder of how the top container lines are capturing market share through consolidation rather than organic gains.

Based on carrier statistics compiled by PIERS, a JOC.com sister company, if the container volumes compiled last year by the Chinese carriers were combined, Cosco and OOCL would have ranked fourth among all lines in the US trades in overall container volume and first in imports.

Carrier consolidation is a natural outcome of a global shipping industry that lost about $10 billion in 2016, but for beneficial cargo owners it means fewer carrier choices and ultimately greater carrier pricing discipline and increased freight rates.

Cosco is completing the approval processes necessary for its acquisition of OOCL. Cosco was the fastest-growing major carrier in total loaded import and export containers in 2017 compared with 2016 at 30.9 percent to 2.4 million TEU owing to its merger with China Shipping Container Line. OOCL grew at 16.2 percent year over year to 1.8 million TEU. Their combined share for the US trade as a whole would have been 11.8 percent in 2017, making them No. 4, behind No. 1 CMA CGM/APL, at 12.6 percent market share, and Mediterranean Shipping Co. and the combined Japanese-flag lines, which would have been tied at 12.5 percent market share.

Continuing with the consolidation theme in global shipping, MOL and NYK Line, also fast-growing carriers, will join with “K” Line to thrust the Japanese lines into the top tier of carriers later this year when they form Ocean Network Express (ONE). If the three lines had merged last year, they would have been right behind CMA CGM and MSC at 12.5 percent market share of total imports and exports. The ONE lines in 2017 would have ranked third in imports with 12.8 percent market share, slightly less than Cosco/OOCL at 13 percent and CMA CGM at 12.8 percent.

The recent spate of carrier mergers is creating a two-tier hierarchy of container lines. CMA CGM, MSC, Maersk/Hamburg Süd, Cosco plus OOCL, and the ONE lines each control more than 4 million TEU of cargo in the US trades. Carrier volumes then drop 25 percent or more to below 3 million TEU for the remaining half-dozen largest carriers in the US trades.

Industry analysts have been predicting for several years now that carrier consolidation will result in fewer than 10 large global container lines, down from 20 before the consolidation movement began three years ago. After a disastrous year in 2016, when carriers in aggregate lost $10 billion and Hanjin Shipping Co. went bankrupt, analysts, and carriers themselves, said that in order to survive and prosper, the industry needed fewer but stronger lines in the major east-west trades.

Korea-based carrier Hyundai Merchant Marine, which picked up cargo following the August 2016 bankruptcy of fellow Korean-flag Hanjin, was the second-fastest growing of the largest carriers at 22.1 percent over 2016 in total laden containers. SM Lines of Korea entered the US West Coast trade last year, so there is no 2016 comparison.

The three largest carriers in the US trades are the European lines CMA CGM, MSC, and Maersk Line, each controlling more than 4 million TEU. CMA CGM grew its volume 14.1 percent, MSC 9.6 percent, and Maersk 0.6 percent. The carrier mergers this year will reduce the number of individual member lines in two of the vessel-sharing alliances, which should make decision-making simpler. THE Alliance of Hapag-Lloyd, NYK, MOL, “K” Line, and Yang Ming will go from five lines to three. The Ocean Alliance of Cosco, OOCL, Evergreen Marine Corp., and CMA CGM will go from four to three lines. Fewer lines also equate to fewer carriers competing for each other’s business, and could help carriers to exert more pricing discipline.

The largest lines were also among the fastest growing in terms of imports. The largest lines operate the biggest vessels in the US trades, and they price to fill the ships in the head-haul lanes such as the eastbound Pacific. The larger lines that did not experience double-digit growth were Maersk, at 3.6 percent, “K” Line at 2.2 percent, and Hapag-Lloyd at 0.9 percent. Maersk, however, retained its rank as third in import volume just as it was third in total container volume.

MSC was the top volume carrier in exports, followed by Maersk and CMA CGM. Those lines each carried more than 1.5 million TEU in 2017. There was a sharp drop off in export volume to about 816,000 TEU by Evergreen and then a further drop to 600,000 TEU and lower. Carriers are usually more choosy when it comes to exports, which generate revenue-per-container of one-third or less than import cargoes. Some carriers forgo the lowest-paying exports in order to quickly reposition the empty containers back to Asia so they can be refilled with higher-paying shipments for US consumers.

Although the alliance-affiliated carriers dominate the major east-west trade lanes, independents such as Pacific International Line, Zim, Wan Hai, and newcomer SM Lines grew at least even with the overall market, if not faster. Some of the independents will upsize their vessels or add services this year.

Some lines operate primarily or exclusively in the smaller north-south trade lanes, and those lanes generally have different dynamics than the trans-Pacific and trans-Atlantic.

Anyone ever wonder why

Permalink Submitted by ferrullig@minds... on Feb 17, 2018 11:14AM EST
Anyone ever wonder why carriers focus on market share? connect the dots to what is written.

Canada Trade and Shipping Outlook
TPM22: What We Learned — Container Shipping in the Crosshairs
Managing E-Commerce From Order to Delivery and Beyond
END_OF_DOCUMENT_TOKEN_TO_BE_REPLACED