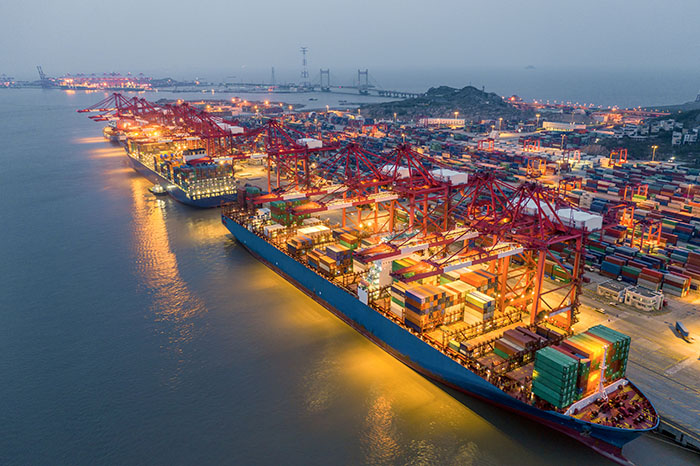 The impact of the coronavirus is projected to reduce container cargo volumes at Chinese ports by over 6 million TEU in the first quarter of 2020, according to Alphaliner. Photo credit: Shutterstock.com.

As the coronavirus spreads rapidly in China, attention is turning to what could be a significant international supply chain impact, especially if the Chinese New Year is effectively extended, with factories remaining closed beyond the traditional end to the annual national holiday.

Some observers cautioned that as of early February, it was still too early to assess the coronavirus’s impact on manufacturing in coastal areas of China, still a significant element in China’s export machine, saying the pace of workers returning to work after the Chinese New Year is not yet known. Footwear giant Nike made no mention of an impact on exports from China in a Feb. 4 statement that focused on an expected “material impact” on retail sales in the Greater China region due to half its Nike-owned stores being closed and similar closures among other stores selling its products.

Shippers sourcing in China typically ship high-priority cargo prior to the Chinese New Year and are prepared over years of experience for manufacturing to slowly return to normal as workers gradually return from long holiday travel. But due to the key role of China in the supply chains of multiple industries — automotive, pharmaceuticals, electronics, and industrial machinery, to name a few — an extended shutdown will impact finished goods exports as well as manufacturing output in other countries that depend on Chinese inputs. That was seen when Hyundai Motor Co. announced it will suspend vehicle production at most of its South Korean factories due to its inability to obtain needed parts from China. A major impact is also expected to the drop-shipping model, in which small and medium-sized enterprises rely on China manufacturers to ship products directly to American and European consumers.

According to IHS Markit, the nationwide extension of Lunar New Year celebrations impacts 80 percent of the China’s production capacity, with Guangdong, Zhejiang, and Jiangsu each contributing more than 1 million units of auto production annually. In one scenario, if the 20 provinces return to work Feb. 10 and five of them — Hubei, Shanghai, Guangdong, Chongqing, and Zhejiang — extend leave by another two weeks, production would plunge by 800,000 units. That’s a 15 percent reduction in production that would ripple through supplier supply chains and could ultimately widen to more than 910,000 units.

But for international container shipping, the key impact will be from extended factory closures.

“The question is still: For how long will PRChina continue the Spring Festival?” Colombia-based forwarder Rene Winckler wrote on LinkedIn at the end of January. “The problem is not about shipping but producing. I cannot ship what is not produced.”

According to a DHL report released Jan. 29, post-Lunar New Year manufacturing operations will have returned to normal, for the most part, across China between Feb. 15 and Feb. 21. “However, this year’s timeline is likely to be disrupted due to the extended holiday period, as well as the decision by some other provincial governments to further delay the restart of manufacturing activities.”

In Wuhan, at the center of the coronavirus outbreak and a major automotive production center, logistics operations were at a near standstill. DHL reported that “heavy port congestion for vessels along the Yangtze River near Wuhan will likely persist as the coronavirus crisis unfolds.”

To the extent there is a material hit on exports from China, it will pose a test to container carriers in maintaining capacity discipline ahead of annual contract negotiations that typically kick off in March and extend through May 1. Many ships are coming back into service following scrubber retrofits, but some of these could be delayed by the coronavirus impact on shipyards. On top of any drop in demand due to the outbreak, this could place added pressure on ocean carrier pricing and test carriers’ ability to reduce short-term capacity through extensive use of blanked sailings.

According to Alphaliner, there is no question that there will be an impact on exports in the first quarter. “It is unclear how much longer the lines can maintain the so-called capacity discipline in the market, especially in light of what could potentially set out to be a very weak first quarter of this year given what is happening in Asia at the moment,” Alphaliner analyst Tan Hua Joo told the Georgia Foreign Trade Conference at Sea Island on Feb. 3.

Alphaliner said on Feb. 4 the impact of the coronavirus will reduce container cargo volumes at Chinese ports, including Hong Kong, by over 6 million TEU in the first quarter of 2020, a decline of approximately 10 percent. Tan told the Georgia event that before the outbreak, Alphaliner had forecast 2.2 percent growth for 2020, but that could now be cut by 0.5 percentage points.

Container line executives admit that the impact on volumes will be negative, but they caution against doomsaying and erroneous information manifesting itself in unfounded rumors of quarantined vessels. There will be an impact in the short and medium term, but the industry will recover, carriers told The Journal of Commerce. “The sky isn’t falling,” Uffe Ostergaard, president, North America, for Hapag-Lloyd, said at the Georgia event.