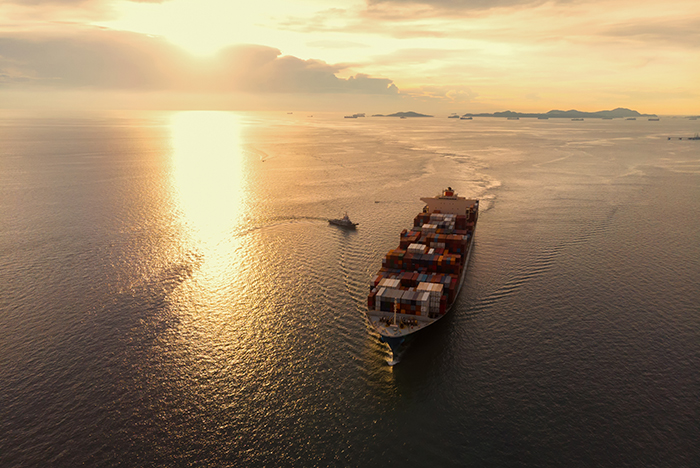 As attendees prepare for the upcoming TPM20 in Long Beach March 1–4, the industry is in the grip of yet another external shock, as China remains in the early stages of restarting production following a massive coronavirus (COVID-19) outbreak. Photo credit: Shutterstock.com.

In 2015, when TPM got under way in early March, nearly 30 container ships were anchored off the ports of Los Angeles and Long Beach waiting to unload, a reminder of the vulnerability of the container shipping supply chain to external shocks to the system. In that instance, a months-long longshore labor dispute tied to a contract negotiation was hurtling toward a government-mediated conclusion, but nothing would enable carriers, shippers, and other supply chain participants to recover losses sustained during six months of disruption.

As TPM began last year, the industry was still wrestling with the logistical fallout from the Trump administration’s import tariffs on Chinese goods. The industry experienced an unusual post-peak season surge in volumes, constrained capacity, and much higher spot rates in the run up to the threatened Dec. 31 imposition of tariffs, which in the end didn’t happen thanks to a trade truce in early December.

This year, the pattern is repeating itself, but on a scale that has yet to be seen in container shipping’s more than 60-year history. As attendees prepare for the upcoming TPM20 in Long Beach March 1-4, the industry is in the grips of yet another external shock. China — still the source of 65 percent of trans-Pacific containerized imports, according to IHS Markit, parent company of JOC.com — remains in the early stages of restarting production following a massive coronavirus (COVID-19) outbreak, the effect of which was to extend by several weeks the annual shutdown associated with the Chinese New Year.

The unprecedented scale of the disruption, which forced carriers to blank 46 percent of capacity in the Asia-Europe trade, according to Alphaliner, left longtime players such as forwarder Expeditors International, who have seen it all, at a loss for words. “Over our 40-year history, we have experienced many events that have disrupted supply chains. We have not, however, experienced a situation where manufacturing capability has been shut down or severely hampered to such an extent,” the company said in a Feb. 18 securities filing.

However, many believe the prolonged shutdown is just a prelude to an overwhelming surge, and likely capacity shortages, that will materialize once factories are back to full production, fulfilling demand for a still very strong US economy. Expeditors said such a scenario could result in “a sharp rebound in trade.”

How long can these external shocks keep recurring before users lose faith in the system? Repeatedly, the vulnerability of the container shipping supply chain has been painfully exposed. The question now is what that means for the long term.

There are only limited steps supply chain participants can take to mitigate risks like these. Some disruptions can be anticipated, and those affected are able to at least partly plan for them. For example, having learned the lesson that the 2014–2015 West Coast labor conflict was not a one-off occurrence, but rather a labor disruption that occurs like clockwork each time a collective bargaining agreement is up for renewal, supply chains have adjusted to route many goods through the US East and Gulf coasts as well as Canada’s West Coast, where the risk of labor disruption is greatly reduced. However, First Nation rail blockages in recent weeks have underscored another threat to supply chains tied to Canadian ports.

But planning for the impact of the coronavirus outbreak, a trade war, or even the supply chain upheaval tied to the financial crisis and its aftermath a decade earlier is no easy task. Some might say it’s impossible.

This raises larger questions around how supply chains are set up and the assumptions behind them. Technology, for the most part, is a non-player in this picture; where technology is making the greatest progress in the container supply chain — in achieving long sought-after visibility thanks to APIs and new data sources such as the so-called Internet of Things — is most useful in tactical scenarios involving individual containers, not the flow in the aggregate.

The problem with these mega-episodes is that disruption at a transportation level becomes one more argument for de-risking the supply chain overall. And that debate within shipper organizations is occurring alongside others, such as the need to respond to rapidly changing customer preferences and ensure consistent inventories to support e-commerce sales. These are the types of macro factors that inevitably lead to wholesale reevaluation of supply chains.

Part of the solution may be to flee from high-risk areas. The Trump tariffs appear to be leading to a flight from China as a sourcing country, and the coronavirus will likely strengthen that trend, given the single-country risk that it has exposed. Container lines are expanding capacity on Asia to the North American East Coast services and limiting interim port calls in the Middle East and Europe to make the services faster; that is a direct reflection of the shift to southeast Asia sourcing.

But the solution to de-risking the container supply chain is also to bring production closer to the end consumer. This parallels the rise of protectionism and the proliferation of regional and bilateral trade agreements as multilateral trade liberalization via the World Trade Organization has lost momentum.

The container supply chain hasn’t helped; over the years, in the aggregate it has shown itself to be one of volatility, commoditization, unpredictability, and opacity, which on balance argues against using the system, versus seeing it as a catalyst for growth. It’s a deep hole to climb out of.