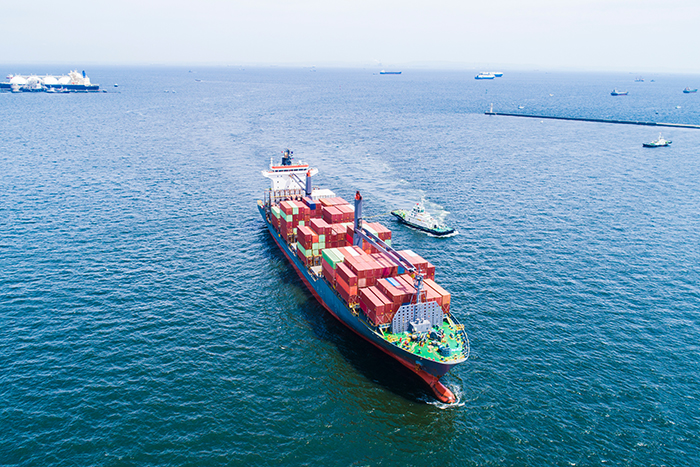 As of Feb. 23, the number of blank sailings announced by carriers equated to an estimated total demand shortfall of 1.7 million TEU. Photo credit: Shutterstock.com.

As the container shipping industry entered 2020, all eyes were on the potential disruptive effects of IMO 2020 and the phasing-in of low-sulfur fuel. The concerns were plentiful, and questions abounded. Would the carriers be successful in passing on the additional costs? Would there be sufficient amounts of low-sulfur fuel available? Could the fuel quality be trusted? Would the rules even be enforced? Is scrubber installation more economically viable for carriers? Is liquefied natural gas (LNG)?

But before the industry could even begin to answer any of these questions, a new virus emerged in China and in a scant few weeks, managed to take front and center stage in terms of disruption.

We do not yet know what the eventual full scale and impact of the coronavirus disease 2019 (COVID-19) will be, but one can already predict a series of events which will impact global trade — both directly and tangentially — as well as recognize a deeper systemic risk within the liner shipping industry.

Please note that the following only focuses on the ramifications for container shipping. The core of the crisis is humanitarian in nature, but we will leave that discussion to those more qualified.

The coronavirus outbreak has started to topple a series of dominoes. The first domino was the failure to reopen Chinese manufacturing facilities following annual Chinese New Year closures. This created a massive shortfall in Chinese exports and, therefore, a drop in container demand.

The new blank sailings will inevitably lead to a raft of blank sailings for export cargo back to Asia anywhere from three to 10 weeks into the future, depending on transit times and the timing of the headhaul blank sailing — domino number three.

The pre-Chinese New Year peak, which is cargo now being delivered, results in a substantial number of empty containers building up in places such as Europe and North America. With the sudden additional shortfall in capacity due to the blank sailings, carriers will be hard pressed to cater appropriately for the repatriation of empties in combination with the actual export cargo to Asia — domino number four.

The squeeze on capacity on backhauls to Asia will also drive up backhaul rates — domino number five.

Meanwhile, in the most positive outlooks, the outbreak will subside, and Chinese factories will ramp back up again, and at a higher rate than usual in order to catch up with lost production. This will create a surge in demand for container transportation. But due to the previous dominoes, the carriers will have had problems getting their equipment back to China, and exports will be hampered by an equipment shortage — domino number six.

The equipment shortage in China will then lead to the ordering of new containers in China to make up for the shortfall — domino number seven. This sets the stage for domino number eight, dropping values of containers, as the capacity from the new containers will reflect a short-term issue and not a structural shortage of supply. But that temporary shortage will, in turn, drive domino number nine: increasing headhaul rates.

At the same time, refrigerated (reefer) containers will continue to stack up in Chinese ports, exhausting plug capacity — domino 10. This will trigger domino 11, a sharp increase in congestion surcharges for Chinese reefer imports, as well as domino 12, the diversion of reefer cargo to other Asian ports, creating congestion challenges — and new tranches of dominoes — all their own.

The temporary stoppage of reefer flow into China will create significant delays in the repatriation of reefer containers back to their origins, causing a temporary equipment shortage for many food exporters across the globe — domino 13 — and reefer transport rates from those regions will increase as a result — domino 14.

Additional tangential dominoes, such as import congestion in India due to the lack of proper Chinese documents because the clerks in China were not at work to provide them, as well as the impact on inland trucking, rail, barge, and chassis providers will also be falling at the same time.

In the best case, the coronavirus outbreak is contained quickly. If so, the dominoes outlined above will continue to fall, but the duration of each one will be relatively short. The magnitude of those dominoes can to some degree also be controlled, but that depends on the ability of the carriers to operationally manage the disruption to their normal vessel flows.

Generally speaking, the liner shipping industry has proven itself highly resilient. Fuel price spikes, carrier bankruptcies, port strikes, vessel fires — even Canadian rail disruption caused by protests over a natural gas pipeline — are all fairly common events, and in each instance the impact on the global supply chain is limited by the high degree of overlapping redundancy built into the liner carriers’ networks.

However, what we are seeing now is the impact of a much larger systemic risk. Blocking a large number of vital nodes in the system for all players at the same time threatens to create a disproportionately large impact, lingering longer than usual. The last time we saw an event with systemic impact was more than a decade ago during the financial crisis. Not even an event such as the sudden bankruptcy of Hanjin Shipping, at the time the seventh-largest carrier worldwide, nor the 2017 cyberattack on Maersk Line, which disrupted operations at the world’s largest carrier for two weeks, had such an impact.