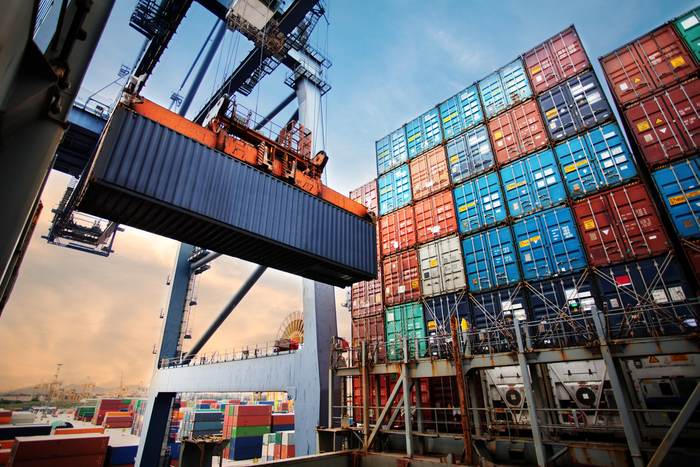 Import warehouses in Southern California are jammed, delaying the unloading of containers and repositioning of the equipment back to China. Photo credit: Shutterstock.com.

Equipment shortages in Asia are worsening as importers in the United States and Europe struggle to return empty containers to China and other Asian manufacturing hubs, casting doubt as to whether the international supply chain will be ready for the upcoming peak shipping season.

The container imbalance has been caused primarily by the spike in imports to the US and Europe in July and August following the reopening of their economies following lockdowns put in place in the early days of the coronavirus disease 2019 (COVID-19). Now, carriers are having difficulties repositioning the empty containers for return to load ports in Asia, especially China, according to carriers and non-vessel operating common carriers (NVOs).

Containers of all sizes — 20-foot, 40-foot, and 40-foot high-cube — are in short supply. Jon Monroe, a consultant to NVOs, listed in his weekly newsletter Wednesday nine load ports in China that are short on containers to various degrees. As a result, exporters in China are grabbing whatever containers they can, even if it means downsizing to containers that carry less freight at a higher cost to beneficial cargo owners (BCOs), he said.

“There are plenty of reports out there that a lot of equipment — I mean, I’m not talking for Maersk, but for the industry, if you will — has been stuck in Europe and the US and other importing regions and is slow in finding its way back to Asia,” Maersk CEO Søren Skou said on the company’s Q2 earnings call on Aug. 19.

In addition, typhoons and fog are throwing vessels off schedule in China, South Korea, and Japan, in some cases resulting in liner services skipping port calls to avoid weather issues and not dropping off empties, thereby contributing to the shortages.

“There are a multitude of reasons [for the container shortages]: a trade imbalance from Europe and the US to Asia, bad weather, and a cargo rush ahead of the weeklong shutdown for China’s National Day holiday,” said Sundara, director of ocean freight for Asia Pacific at Scan Global Logistics.

Shortages ‘only going to get worse’

NVOs do not see the container shortages in Asia dissipating any time soon. “The equipment shortage is massive, and it’s only going to get worse,” said David Bennett, president of the Americas at the NVO Globe Express Services. Bennett sees the strong demand in the US for e-commerce merchandise and medical supplies, such as personal protective equipment, lasting into October, and probably beyond that.

In the US, warehouses, especially those in Southern California, have been overwhelmed by imports over the past two months. Productivity at the import warehouses is down as employers space out workers for safety reasons. Also, logistics companies report a shortage of workers at the warehouses due to COVID-19. As a result, containers, and the chassis they sit on, are remaining at warehouses much longer than they normally would.

To alleviate this problem, ocean carriers, who for years had been granting extended free time for equipment storage to retailers and other large customers in order to retain their business, are now cutting back on free time, according to NVOs. While carriers continue to honor the traditional three or four days of free storage time, customers, even large retailers and importers that had been given 20 days or more of additional free time, are seeing those times reduced dramatically, according to one NVO who requested anonymity,

James Caradonna, general manager pricing/Americas at M&R Forwarding and Multi Container Line, said that when customers request extended free time now, the NVO is in a position where it has to explain to the consignee some carriers are now backtracking from free-time extensions.

NVOs are now telling their BCO customers the answer is “no” because carriers want the equipment back in Asia as quickly as possible, Caradonna said.

The ability of carriers to cut back on free time reflects the leverage carriers now have in a market where space and equipment are at a premium, he said. “If a carrier were compelled to extend a longer free period to a shipper due to competitive dynamics, they are less compelled today,” said Caradonna.

A source within the Los Angeles-Long Beach port complex who asked not to be identified said if carriers resist requests from BCOs for free-time extensions beyond the normal three or four days, the entire supply chain will benefit. When large BCOs negotiate with carriers for extended free time, which is common in Los Angeles-Long Beach, the ports have said over the years it contributes to container and chassis shortages during high-volume periods such as during the peak shipping season.

“It’s gotten to the point where we have to say [to the BCOs], ‘You are part of the problem,’” he said.

Importers in Southern California’s Inland Empire face the challenge of finding enough truck capacity to return empty containers to the ports, said Weston LaBar, CEO of the Harbor Trucking Association (HTA). The problem is compounded by the difficulty truckers are facing in securing appointments for the return of empties to the marine terminals, he said.

Logistics companies say demand for empty returns is a big problem. “It’s becoming increasingly harder to pre-appoint empty container returns for retailers,” said Brian Kempisty, founder of Port X Logistics. “Now, it can take two to three days to get an appointment, largely because plenty of slots are booked but not used.”

Due to their inability to get appointment slots for empty returns, LaBar said some truckers are booking multiple slots when they can, but are not canceling the slots they don’t use. He said the HTA is working with terminal operators to correct this problem.

The logistics problems in Asia and Southern California are pushing up the delivered cost of imports in the US. Customers who are desperate to obtain containers and secure space on vessels leaving Asian ports are willing to pay hefty surcharges on top of record-high spot rates for ocean voyage. Shippers are paying surcharges to guarantee receipt of equipment and to secure slots on vessels at the Chinese ports. Carriers are also charging additional fees to guarantee priority unloading at US ports and delivery to railroads and truckers.

Carriers each have their own name for these guaranteed programs, and according to a spreadsheet provided by an NVO who asked not to be identified, the individual surcharges for these guarantees range from $300 to $1,950 per container, on top of record-high spot ocean rates from load ports in China to the US East and West coasts.

Pricing from Asia to the US West Coast reached $3,758 per FEU on Friday, up 3.3 percent from last week and 140 percent from the same week a year ago, according to the Shanghai Containerized Freight Index (SCFI), which is published in the JOC Shipping and Logistics Pricing Hub. The Asia-US East Coast rate hit $4,538 per FEU, up 7.9 percent sequentially and 72.5 percent year over year.

Carriers are in such desperate need of containers in China that some lines are refusing to accept bookings to India and other Asian locations, said Alan Baer, president of NVO TTS Worldwide. “They want to get the containers to China,” he said.

Global Shipping Outlook: A Sneak Peek at 2021
Port Performance North America: Managing Cargo Flow During a Pandemic — and Beyond
END_OF_DOCUMENT_TOKEN_TO_BE_REPLACED