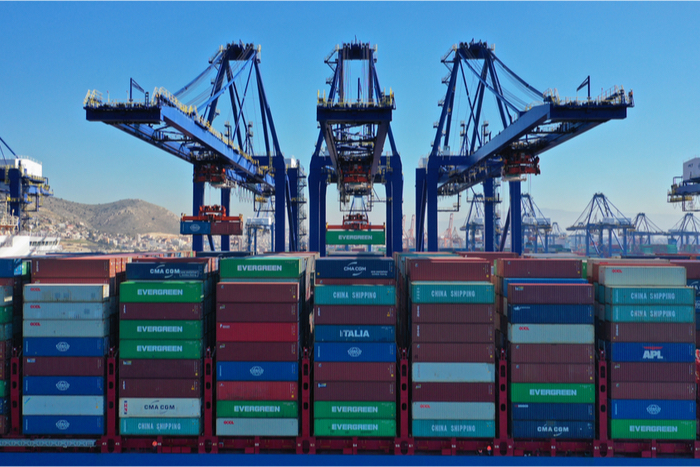 Few in the shipping industry think the current level of demand is sustainable, yet each wave of strengthening economic indicators pushes out the day when volume growth tapers off. Photo credit: Shutterstock.com.

The prospects are growing of an overtaxed container shipping system by US consumer and manufacturing demand continuing past the usual lull in activity when Chinese factories generally close for Lunar New Year celebrations. Roaring US demand atypically kept many of those factories open last year, and may again when the two weeks of celebrations begin Feb. 12.

With sales already outpacing how fast US retailers can get goods into the country, European forwarders are warning of a similar wave of demand building for Asian goods on the Asia-Europe trade. IHS Markit on June 8 upgraded its US GDP outlook from 6.7 percent expansion, to 7.1 percent, and a June 23 reading of the Flash Eurozone PMI® Composite Output Index, a measure of economic activity, rose from 57.1 in May to 59.2, a 180-month or 15-year high.

He added that US importers were worried about capacity into 2022, with some choosing to front-load shipments. He pointed to record-low US retail inventory levels as a further sign that shippers still have plenty of ordering heft. The latest data for the US Census Bureau show that the seasonally adjusted ratio of sales to inventories was at 1.07 in April, down from 1.67 a year prior.

That means US importers are selling products as fast — or faster — than they are importing them. Amid this rush for freight capacity, which is beginning to envelop European importers of Asian-made goods as well, there are signs that shippers are making major changes to their supply chains. For industry veterans, this may sound like a familiar refrain after a major disruption. The 2014–15 West Coast labor disruption drove more Asian routings to the East Coast, but it did not upend the system, nor did the collapse of Hanjin Shipping in 2016.

Few in the shipping industry think the current level of demand is sustainable, yet each wave of strengthening economic indicators pushes out the day when volume growth tapers off. On a year-over-year basis, US retailers will import 14 percent more in July, 7.5 percent more in August, and 1.7 percent more in September, according to the Global Port Tracker, which is published monthly by the National Retail Federation and Hackett Associates. Those slowing annual growth rates represent comparisons to when volumes began surging to record levels last year.

The extent of the shock — with US importers paying up to four or five times as much on the spot market to import an FEU container from Asia and struggling to get containers out of marine terminals and inland rail hubs for weeks — will linger. Cost concerns, as always, will temper more radical proposals to mitigate the effects of the next shock event, but there is a sense that things will be different as demand becomes more volatile and pricing power shifts further away from shippers to carriers.

The COVID-19 pandemic will not stop importers from sourcing in Asia and other low-cost production centers; the economics just do not allow for that. But their waning acceptance of risk may push shippers to a more “blended” approach between localized and global sourcing, according to a report from forwarder DSV and the PARC Institute of Manufacturing, Logistics, and Inventory at Cardiff University. Since 2010, logistics managers have been rethinking their dependence on far-flung supply chains due to rising national protectionism, a slew of natural disasters, and growing carbon footprint reduction mandates. The pandemic, like with many long-building trends, accelerated the focus on prioritizing the continuity of supply.

“The vast majority of companies we spoke with are focused on continuity of supply,” Mike Wilson, executive vice president of global logistics manufacturing services at DSV, told The Journal of Commerce. Logistics operations “still have to be efficient and optimized,” he said. “But they have to maintain continuity of supply in the most efficient way, and that brings it back full circle to the ‘global versus local’ question.”

The small and medium-sized shippers that ECU Worldwide serves have come to expect a “continual feed” of product flowing through their supply chains, said CEO Tim Tudor. The steady churn of demand has driven some full-containerload shippers to the less-than-containerload (LCL) market, and others may continue to tap LCL as a hedge against disruption. For some shippers, LCL enables them to ship Asian goods immediately, rather than waiting for enough items to stuff a full container.

Closer integration of the various freight modes and cargo hand-offs also gives importers some cushion when disruption flares, argues Vincent Clerc, CEO of ocean and logistics at Maersk. Customers with more integrated supply chains — or in which Maersk was managing various links in the supply chain, rather than just the ocean shipping segment — have weathered the last year better than those using multiple, disconnected providers across different modes and geographies, he said.

As Asia sourcing grew, largely thanks to China’s entrance into the World Trade Organization in 2001, supply chains became further splintered into various modules and units, operated by various service providers. Commoditization, unsurprisingly, followed. And that worked generally well in a so-called efficient market in which there were not many supply disruptions, but not in the current market, Clerc said during a media briefing. He likened the older system to a database with proprietary on-premise mainframes, whereas Maersk sees more shippers tilting toward a system like that of cloud computing, where different infrastructure works in unison.

“The current paradigm around which a lot of the supply chains have been built has outlived its purpose,” said Clerc, who added that the effects of the pandemic have “vindicated” Maersk’s transformation into an integrator, which it began in 2016.

Maersk’s top customers seem to think so, too. Revenue from the top 200 customers in its logistics business in the first quarter jumped 68 percent to $893 million on a year-over-year basis.

Maersk is not the only one targeting a greater stake in customers’ supply chains. Through its tailored solutions strategy, CMA CGM’s logistics revenue rose 25 percent to $2.14 billion in the first quarter compared with the same period in 2020. CMA CGM took full control of CEVA Logistics, then the 13th-largest third-party logistics provider globally, in 2018; since then, CEVA has launched trans-Atlantic air cargo services and plans to expand its service network to Dubai, Beirut, and Istanbul this summer.

Whether through the use of premium services, such as expedited ocean shipping with guaranteed door delivery, or more integrated offerings, most shippers will not have the foresight or ability to make major changes to their containerized supply chains. But things are changing, even if they cannot respond.

With some shippers looking to tie themselves more closely to Maersk and its capacity, multiyear contracts now account for 35 percent of its North American business, compared with less than 10 percent in years past. Of course, multiyear contracts look more favorable with record container spot rates and higher trans-Pacific service contracts than a year ago, but then again, so does the ability to ensure inventory gets into the country before the winter holidays.

Solving for Uncertainty: A Guide to Variable Transportation Budgets
END_OF_DOCUMENT_TOKEN_TO_BE_REPLACED