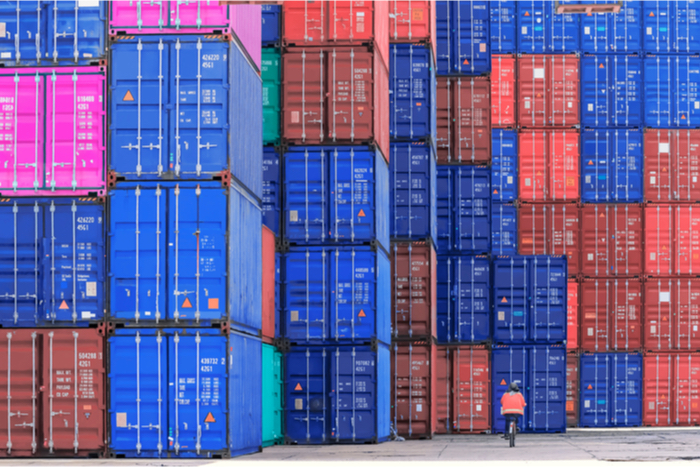 The greatest impediment to clearing the backlog of containers at Los Angeles-Long Beach is a shortage of available chassis, container lines told JOC.com. Photo credit: Shutterstock.com.

Container lines were caught unaware by the new port tariff announced by the ports of Los Angeles and Long Beach last week, and carrier executives are bristling at the idea that — for the second time in just two months — the Biden administration is ignoring their suggestions and delivering directives via the ports.

The Southern California ports’ Oct. 25 announcement that they would impose an emergency fee for excessive container dwells at marine terminals does not account for the scarcity of chassis needed to remove those containers. And while they plan to try to pass on the daily fees, which will be assessed from Nov. 15 and rise rapidly with each additional day a container is left on the docks, carriers say many of their retailer and non-vessel-operating common carrier (NVO) customers have language within their service contract prohibiting additional surcharges or additional port tariffs. In a Wednesday notice, Mediterrean Shipping Co. said it would pass the port tariff to customers.

The severity of the fees is difficult to overstate. The carrier is liable for $100 on the first day a container is in violation, $200 the second day, $300 the third day, and so on. Within a week, the total fees for a single container would total $2,800, and within two weeks, would total $6,000.

With port congestion now seen as a political liability for Biden, carriers say commercial realities are being steamrolled by top-down directives from Washington, DC. The ports’ mid-September announcement that they would move toward around-the-clock operations, encouraged by the Biden administration, ignored carriers’ warnings that marine terminals would not extend gates unless enough importers and consignees took advantage of off-hours, one carrier executive noted.

True to those warnings, marine terminals have resisted expanding gate hours, arguing the costs don’t justify the trickles of trucks picking up and returning containers during the early morning “hoot” shift.

Carriers also complain of what they see as a double standard, pointing to how Los Angeles and Long Beach announced a port tariff seven days before it would take effect — later pushed back a week — while container lines must file any surcharges with maritime regulators at least 30 days before any new tariff would take effect.

The carriers “are exasperated as well, trying to get the containers off the terminals. They don’t want their ships waiting; they want to get them back to Asia," said Kurt McElroy, executive vice president at Kerry Apex, a large trans-Pacific NVO.

But carriers aren’t blameless either. They have taken only limited steps to address shippers’ complaints over unfair detention and demurrage billing, despite seven years of unsuccessful efforts by the US Federal Maritime Commission (FMC) to encourage a more equitable process. And carriers are hardly discouraging importers from taking up valuable marine terminal space by offering extended free time to those large shippers in annual service contracts.

Still, the pressures on the carriers have been record-setting from a volume growth standpoint. US imports from Asia were up 19 percent in January-September 2021 versus the same period in 2019, according to data from PIERS, a sister product of JOC.com within IHS Markit.

Carriers further argue that they’re being penalized for the behavior of their customers, because they don’t have any control over when shippers remove import containers from port terminals. Shippers counter that passing the storage fees on to them violates new detention and demurrage rulemaking that suggests such fees can only be levied if the true incentive is improving terminal flow and the importer or consignee isn’t prevented from receiving its boxes due to congestion or other factors out of their control.

“The fee will be charged to the ocean carriers, but it is expected that the carriers will pass these along to shippers, meaning shippers will, in effect, end up paying a port demurrage surcharge over and above hefty demurrage charges already in place, which are already causing enough havoc in the industry,” maritime attorney Carlos Rodriguez wrote in a Nov. 2 JOC.com commentary. “The ultimate stated goal of the fee is to encourage carriers to move containers, but the announced solution by the ports seems counterintuitive, since the problem is not simply that carriers are not picking up containers in time, and misses the complexity of the causal factors resulting in demurrage.”

In a Tuesday letter, the National Industrial Transportation League told FMC chairman Daniel Maffei, “Any pass-through [of the new fees] will undermine any incentive for ocean carriers to change their own practices to help alleviate congestion.” Citing the agency’s interpretive rulemaking, the shipper group asked the FMC to clarify whether the new port fees would fall under the same test of fulfilling its “intended primary purposes as financial incentive to promote freight fluidity.”

Then there is the tricky tissue of who is responsible for moving the boxes out of the terminal. Carriers tell JOC.com that as many as 75 to 80 percent of the containers sitting at Los Angeles-Long Beach terminals are merchant-haulage boxes, meaning the contract of carriage ends at the port, thus leaving the shipper as the party responsible for removing the container. However, even if the box is a “store-door” move, in which the carrier delivers the box to the customer’s distribution center as part of the contract, the carrier is still unable to initiate the move until the customer gives permission, or else the customer can reject the delivery. For port-to-door delivery via intermodal rail, carriers also face capacity constraints.

Even then, carriers admit a majority of the containers on the docks are within contracted free time. Lengthy free time of 20 days or more remains the norm within contracts, especially with the large importers that represent a significant portion of the long-dwelling containers at Los Angeles-Long Beach. Generous storage terms are a holdover from a pre-COVID-19 industry, when overcapacity and weak negotiating leverage forced carriers to offer extended free time.

Such terms are unlikely to continue. One carrier executive told JOC.com that they will be aiming to bring free time from an average of 15 days down to five days, and carriers have been warning shippers all year that pre-pandemic free time terms will become a thing of the past in upcoming contracts. But it hasn’t made a difference yet, given that carriers tell JOC.com they have been pressuring importers for months to remove more containers from the docks, to little avail.

The greatest impediment to clearing the backlog of containers at Los Angeles-Long Beach is a shortage of available chassis, carriers told JOC.com. The average time a chassis sits at a local warehouse or rail ramp reached 8.8 days this week, more than double the three to four days necessary to maintain cargo flow, according to data from the Pool of Pools, which is managed by the three largest chassis providers in Southern California.

In part due to countervailing duties imposed earlier this year on imports of China-made chassis, the dominant source of chassis manufacturing, the US marine chassis fleet will grow only 1.5 percent this year and likely not much more than that in 2022, according to chassis lessor sources.

Further squeezing the equipment circulation, the majority of chassis aren’t returned to the marine terminal from which they originate. In August, 59 percent of chassis were returned to a different marine terminal than the one they were picked up from, according to the most recent Pool of Pools data available.

How to Improve OTIF: 15 Tips for On Time and In Full Delivery
END_OF_DOCUMENT_TOKEN_TO_BE_REPLACED