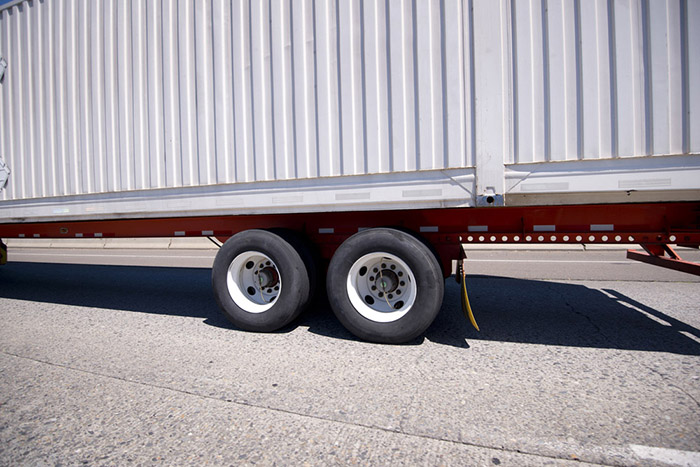 The wholesale exit of container lines from chassis management would be a boon to productivity at US ports.

Rooney noted that pending consolidations will reduce the number of major global carriers to 13 or 14. “If that number gets to 10 or less, I think you’re going to see a lot more freedom to not get involved in this game of using a free chassis as a way to gain business,” he said.

Chassis are a longstanding headache at US container ports. Unlike in other countries, container lines traditionally provided chassis as part of a bundled service. Seeking to reduce costs, they began transferring their fleets to third-party chassis lessors in 2009.

Ocean carriers, however, remain deeply involved in chassis. Often pressured by large shippers, container lines continue to require truckers to use a certain lessor’s chassis used in door-to-door moves controlled by the carrier.

This gums up terminal operations. Truckers must make extra stops to switch equipment between loads for different customers, and restrictions on chassis use complicate the challenge of having chassis where they’re needed. Multiuser chassis pools have helped, but truckers still complain that the system is unnecessarily inefficient.

Rooney spent most of his career with Sea-Land Service and Hanjin Shipping before becoming vice president, North America trade management at Kuehne + Nagel. He said offering “free” chassis in a bundled service bred inefficiency and that the system would work better if liners made a clean break.

“It’s been a surprise to me that the carriers have still been involved in supplying chassis more or less as bait, to get their ships full,” he said. “For 50 years, those assets were given away for free, and we all know what happens to free assets — they get wasted.”

Rooney said the current wave of container-line consolidation could encourage carriers to quit thinking of chassis as a utility and see them as an asset that requires an adequate return on investment.

“They’ll gain more pricing power, and in that environment, there is not going to be nearly the incentive to use a free or discounted asset to gain business,” he said.

Some truckers and cargo owners have resorted to investing in their own chassis through purchase or long-term leases in order to ensure equipment availability.

Rooney doesn’t see this as an ideal solution. He said truckers and shippers lack the resources and size needed for efficient chassis operation and utilization. “I think scale is an important part of making money in the chassis business,” he said.

Ken Kellaway, president and CEO of RoadOne IntermodaLogistics, agreed that ship lines need to get out of chassis.

“The steamship lines need to recognize that they need intervention. There’s clearly an addiction here that they need to rid themselves of,” he said. “Every time somebody slides a drink under their face, they take another drink and are exactly where they started.”

Kellaway said RoadOne’s drivers spend 20 to 30 percent of their time “moving other people’s assets around,” and the company spent $2.4 million last year replacing blown tires or performing other repairs on rented chassis.

“If we looked at how much inefficiency has been injected into the system because of this divestiture of chassis, I think it would blow all of our minds away,” Kellaway said.

Rooney said those costs aren’t new, but are merely more visible now. Previously, he said, they were absorbed by ocean carriers “to the tune of $2 billion to $3 billion in assets that they were getting zero return on, and $1 billion to $2 billion of (annual) operating expense.

“All of that was flushed out into the system, and now people are trying to sort out what to do with those $2 billion or $3 billion of assets and to get a return on them.”

Rooney said chassis utilization still isn't ideal but is “a hell of a lot better” than the 50 to 60 percent that was common when carriers owned their own chassis. Those utilization levels “were totally crazy, which is why carriers said, ‘We don’t want it anymore.’ You can’t make money on an asset with 50 to 60 percent utilization.”